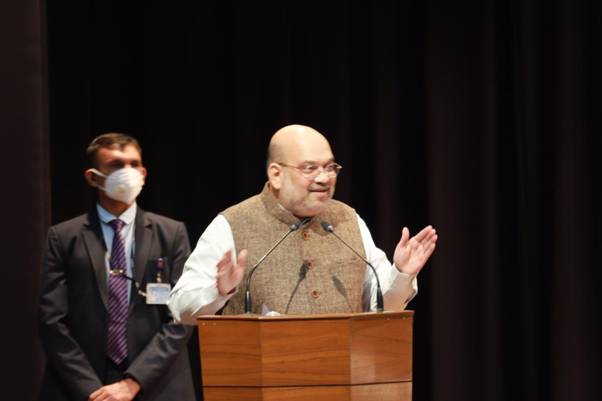 New Delhi: Union Home Minister Shri Amit Shah has said that Gurudev Rabindranath Tagore, Visva Bharati and Shantiniketan have always been centers of attraction in India and abroad. Addressing the faculty, students and intellectuals at Visva Bharati University at Shantiniketan in West Bengal today, Shri Amit Shah said that whether it be the new ideas in the country’s cultural heritage, art and tradition, or the freedom struggle, Bengal has been 50 years ahead of the times than other parts of the countryin every aspect.The Union Home Minister said that Visva Bharati is going to complete its 100 years. There must have been some ideas at the time when it was founded, and now, on the completion of 100 years, it should be an effort to renew Gurudev Rabindranath Tagore’s ideas from this institution. He said that Shantiniketan and Visva Bharati have contributed to the framework of the education system in the country.

Shri Amit Shah said that this journeythat started from a Brahmacharya Ashram in 1901 has contributed a lot to the Cultural Heritage of India. He said that Gurudev said that the purpose of education is to make the person fearless by thinking beyond all limits of narrowness. Viswa Bharti’s journey will be considered successful only if the ideas emanating from here will change our education system as per the mantra given by Gurudev Ravindra Nath Tagore.Shri Shah also said that the purpose of education is to groom personalities who will break free of luxurious life, attachment and all kinds of social bindings in search of peace and cultivate such minds whose quest to know the truth never stops.
The Union Home Minister said that the Visva Bharati has given the nation several people who have excelled in various fields. In the hundredth year of Visva-Bharati, we should take a pledge that this tradition will not stop and after 50 years, when we will celebrate the 150thanniversary of Visva Bharati, we should aim to nurture at least ten people who excel in various fields and instil Gurudev Tagore’s ideas across the country and make them a part of life and society.

Shri Amit Shah said that many sons of Bengal contributed significantly in the country’s deveopment. Many people like Raja Rammohan Roy, Bankim Chandra Chattopadhyay, Sri Aurobindo, Swami Vivekananda, Ramakrishna Paramahamsa and Subhash Chandra Bose have worked to enrich India’s heritage during the 19thcentury renaissance.The impact of Gurudev Tagore’s ideas andthe greatness of his personality can be known from the fact that people of two different ideologies, – from Mahatma Gandhi to Subhash Chandra Bose,both took inspiration from Gurudev Tagore, this shows the range of Gurudev Tagore’s ideas. Shri Shah also said that Gurudev Tagore is the only great person in the world whose two compositions are being used as national anthem in two countries. This proves how enormous is the canvas of Gurudev’s thoughts, culture, ethics and arts.
The Union Home Minister said that Visva Bharati has always strived to rise above caste, religion and class to deliver the message of humanity. In Indian religion, there has been a system of preservation and promotion of philosophy, literature, music and art and VisvaBharati has amalgamated the literature and philosophy of European and other countries keeping in mind the basic mantra of world brotherhood of our Vedas to realise the mantra of “सर्वेभवंतुसुखिनः, सर्वेसंतुनिरामया”(may all become happy, may none fall ill).He said that unless we refresh the vision of rural development, we will not advance in the modern way, there cannot be all-round development of the country, which the Gurudev had started through VisvaBharati. From here, all such ideas as health, cleanliness, handicrafts andtechnology were taken forward.

Shri Amit Shah said that the Gurudevnever let the student in him die till the very end and he started painting at the age of 70, drawing more than 3,000 paintings before he passed away, proving to the world that one should not stop learning till the last breath. Shri Shah said that work should be done to carry forward the tradition of Gurudev for which VisvaBharati should move forward with an open mind and kind thoughts.
Shri Amit Shah said that the Gurudev, besides penning a voluminous repository of prose and poetry, also managed such a large institution which is certainly admirable and once again the time has come to advance Tagore’s thinking. Visva Bharati has given many scholars to the country. Many people including Mahasweta Devi, Nandlal Bose, Gayatri Devi, Satyajit Ray and Vinod Bihari Mukherjee have done remarkable work in different fields. Today let us resolve that this tradition will not stop.
Earlier, the Union Home Minister Shri Amit Shah paid homage to India’s great thinker Gurudev Rabindranath Tagore at Shantiniketan. Shri Amit Shah also visited the famous Sangeet Bhawan of Visva Bharati University.