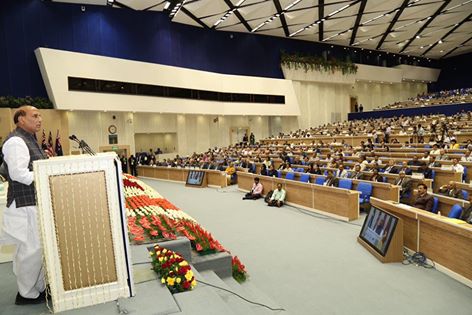 New Delhi: Following is the text of speech by the Union Home Minister Shri Rajnath Singh at the ‘World Environment Conference’, organized by the National Green Tribunal here today:
“I am happy to be a part of this International Conference. I would like to congratulate the National Green Tribunal (NGT) for organizing this Conference, which I am sure must have served as an appropriate platform for exchange of ideas and sharing experiences and knowledge on issues pertaining to environment.

The well-being of humanity, the environment and functioning of the economy, ultimately depends upon judicious and responsible management of the natural resources available on this planet. The humanity cannot keep on guzzling far more natural resources than what the Mother Earth can sustainably provide.

The crisis facing the humanity today has forced us to review the whole gamut of Man–Nature relationship, more precisely in the light of the developments of the last five decades and accordingly chalk out the future course of development

The people of India have always believed in the umbilical relationship with Nature and we regard her as Mother Nature. We can’t exist without Nature.

Nature should not be exploited but nurtured for the wellbeing of the human kind. When Nature is in equilibrium, our lives and the world we live in will be in balance.

Our ancient texts have always highlighted the need to maintain a healthy and sustainable relationship between Mankind and Nature. The Atharva-Veda calls it a bounden duty that we must protect the Earth so that Life can be sustained. We have defined our relationship with the Earth as ‘Mata Bhoomi Putro Aham Prithivya’.

The dharma of protecting the environment was to sustain and ensure progress and welfare of all.

In this attempt, the ancient texts acted as reinforcing factors between the right to exploit the environment and a duty to conserve it – which is now internationally recognized as the concept of ‘sustainable development’.

Reference to the environment has also been made in the Directive Principles of State Policy as well in the interpretation of the Fundamental Right to life. Thus, it can be safely adduced that right to a clean and healthy environment, as has been held by the Supreme Court, is one of the basic tenets of a civilized society.

The three pillars of the Indian democracy, the legislature, executive and judiciary are keen to incorporate the philosophy of deliberative democracy in environmental decision making for ensuring effective accomplishment of the diverse goals of environmental sustainability.

Nature consists of all the living beings on earth, which are mutually dependent on each other. But due to the pollution caused by human beings, many species are becoming extinct and the global climate is also changing at an extremely brisk pace.

Pollution and Climate change are adversely influencing our present and they are also going to have a serious impact on our future. It has been observed that if current consumption and production patterns remain the same and population reaches 9.6 billion by 2050, then, we will need three planets to sustain our ways of living and consumption.

Today climate change has been recognised as a major global challenge.

We in India believe that climate change is the result of emission of greenhouse gases and the resultant global warming that came from the industrial advancement in developed nations, powered by fossil fuel.

Although a developing country like India has little to do with this phenomenon, it has to face the consequences today.

Climate change poses a big threat to millions of our farmers with the changes in weather patterns and increasing intensity of natural disasters.

We are deeply concerned about the rising oceans as our planet is melting at both the ends. Arctic and Antarctica have hit record low ice extents this year and melting poles are threat to our coastlines. We in India are also worried about the retreat of glaciers in Himalayas that feed our rivers and nurture our civilisation.

While the climate-change challenge is formidable it also presents the opportunity to accelerate sustainable development and ensure a better future for everyone on the planet.

Under the Paris agreement, the governments of the world have committed to reducing their carbon emissions drastically, in order to keep global warming below 2°C.

The vast majority of signatory countries have already presented national action plans for achieving this goal, and I hope these plans will become more determined over time.

These Nationally Determined Contributions include renewable-energy targets and proposals for sustainable transportation and energy efficiency.

In addition, I must add that all countries should consider adopting policies to manage natural capital in a judicious manner.

The Paris agreement itself recognizes the important role that natural ecosystems play in limiting the amount of carbon in the atmosphere.

We should adopt ways and means to conserve the existing ecosystems and expand degraded ecosystems – in people-friendly ways.

This is particularly true of wetlands, which include all land areas – such as lakes, floodplains, peatlands, mangroves, and coral reefs – that are covered with water, either seasonally or permanently.

We want the world to act with a sense of urgency. A comprehensive, equitable and durable action plan is required for every country to counter the menace of global warming and climate change.

India is playing a significant role in fighting against these global threats. The Government of India has recently set a target for renewable energy generation of 175 Gigawatt by 2022. By 2030, 40% of our installed capacity will be based on non-fossil fuel.

We are looking for technologies to convert waste to energy. India is investing in supercritical technology in thermal plants.

The Government of India is raising fuel standards for automobiles. India is one of the few countries in the world to impose a tax on coal.

We have also reduced subsidies on petroleum products. We have even introduced tax free bonds for renewable energy.

We also have a plan to expand our forest cover and protect our biodiversity.

Development and environment need to be seen in complimentary and not in antagonistic terms. After all, if there is no earth left, where will development take place? Inclusive development would not be possible without emphasis on environment protection.

Today, when the world is facing the harmful consequences of global warming and depletion of resources, environment conservation has become a topic of global significance.

The idea behind this Conference on Environment was to raise environmental awareness by asking new questions, exploring new possibilities and effectively looking at old problems from a new and global perspective.

It requires ingenious application of mind and creative imagination to get your head around the issues which have been discussed threadbare in this conference.

I am happy to note that the elaborative deliberations have been fruitful.

I believe that the conclusions and recommendations formulated here shall mark real advancement in environmental jurisprudence and thinking”.

Texas A&M: As Monkeypox Spreads, Risk Of Exposure Remains Low For Most