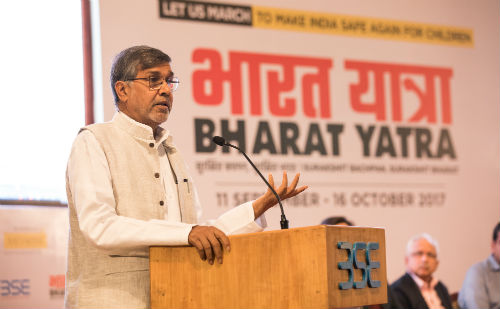 “No developed society in the world can exist along with Child Labour, and it’s sad that we have not been able to eliminate it in the last 70 years of independence. Child labour and trafficking are grave crimes against humanity and the Government of India is committed to eliminate all forms of trafficking.Kailash Satyarthi is responsible for taking the issue of child labour to a global platform and I will ensure that the anti-trafficking bill you are fighting for will be passed soon,” said Union Home Minister Rajnath Singh.

Prior to the Home Minister’s assurance, Mr. Kailash Satyarthi speaking about the growing issues of child sexual abuse, trafficking and labour, said, “There should be exclusive courts for issues related to children, it is a demand we are making through the Bharat Yatra as well. POCSO is a good law, but the implementation and subsequent conviction is very poor. We must have a holistic outlook towards the protection of children, which is why, I request the Home Minister, to ensure that the Trafficking Bill that is yet to be passed is passed at the earliest”
According to 2015 National Crime Records Bureau report, the number of cases filed for child trafficking were 3490, and number of victims of the cases amounted to 3905. The total number of human trafficking cases amounted to 6877 and the victims for these cases totalled to 9127.

“Kailash Satyarthi is on a Bharat Yatra to raise awareness about child sexual abuse and trafficking. I request him to create awareness on the PENCIL portal as well, through the Yatra, across the country. Kailash Satyarthi is also key to reassuring the entire world that India has the capability to fight against child labour and for this menace to be combated. I am encouraged because of the state participation in this program, because there is power in a vision like this.With resolve if India could get its freedom in 5 years, then in less than that, 1 crore Child Labourers can gain that freedom with this vision,” added Shri. Rajnath Singh.
PENCIL, launched to foster the creation of a child labour free India, will seamlessly integrate implementing and monitoring mechanisms for both, enforcement of the legislative provisions and effective implementation of the NCLP.
India is home to the largest number of child labourers in the world. This platform is going to pave the way for effective enforcement of the new child labour law and also ensure accountability of enforcement agencies. Today’s national consultation was a landmark occasion where the Home Ministry and the Labour Ministry have come together to ensure effective collaboration and convergence of efforts and marks a policy shift for India.
The Union Labour Minister, Shri Santosh Kumar Gangwar thanked Mr. Satyarthi for taking the time off his Bharat Yatra to attend the launch as it showed true commitment to the issue of eradicating child labour from India. He emphasised that child labour is a growing menace in the country, and that the labour ministry will look to tackle this issue with strong solutions in the near future.
The Bharat Yatra, which flagged off from Kanniyakumari on the 11th of September, has amongst its demands, the need for India to draft and implement a strong anti-trafficking bill. With the announcement by the Home Minister, one the key elements of the ‘war against rape and trafficking’ will come to fruition, for the protection of children in the country.
In addition to parliamentary support, the Yatra has also received tremendous judicial support as, Chief Justice of High Court of Karnataka, Honourable Justice Subhro Kamal Mukherjee assured the Nobel Peace Laureate that he would personally see to it that POCSO cases are disposed of quickly. He also assured the Nobel Laureate that more child-friendly courts would be set up in Karnataka.

The Yatra is the launch of the three-year campaign against child rape and child sexual abuse which is aimed at increasing awareness and reporting of the cases, strengthening intuitional response including medical health and compensation, ensuring protection for victims and witnesses during trials and increasing convictions of child sexual abuse in a time-bound manner.