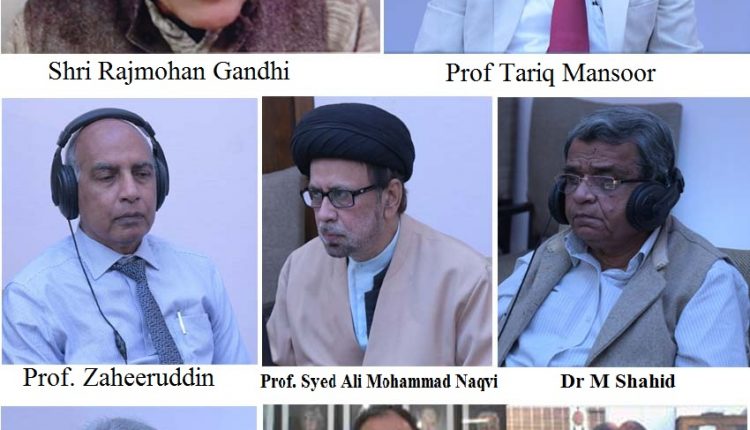 Honest and truthful dialogue may have a connection to the arc of history: Prof Rajmohan Gandhi

Aligarh: “National independence is not enough alone as Mahatma Gandhi saw it as a means of empowering the individual Indian to express dissent fearlessly. He was against coercion in religious matters and in June 1947 two months before freedom, Gandhi said if someone comes to me and forces me not to utter Ram naam, I will utter Ram naam even at the point of the sword. I will defend my faith and conviction with my life”, said Prof Rajmohan Gandhi (Research Professor, University of Illinois) while delivering the online lecture on “Does the Arc of History bend towards Justice? Some Reflections”, organised by the Sir Syed Academy, Aligarh Muslim University under the AMU Centenary Celebrations Lecture Series.

Prof Rajmohan Gandhi, an eminent historian, a political philosopher and grandson of the Father of the Nation Mahatma Gandhi, referring to the distant and near past socio-political upheavals in different regions of the world said: “Mahatma Gandhi’s fight for India’s freedom must be remembered along with his fight for the freedom of the individual Indian to think, to speak, and to believe”.

“In August 1942 Gandhi’s famous Quit India call was overwhelmingly endorsed, but 13 people voted against the resolution. Right after the voting and before his arrest Gandhi spoke to the Mumbai Assembly and said, ‘I congratulate the 13 dissenters who voted against the resolution. Three years later after Germany and Japan were defeated Quit India Movement’s imprisoned warriors were released from the prison. Meanwhile in February 1946 in Mumbai all over-enthusiastic patriots insisted the people to shout Jai Hind. Gandhi ji promptly objected to it by saying ‘in as much as a single person is compelled to shout Jai Hind or any popular slogan, a nail is driven into the coffin of Swaraj”.

Delineating the struggles for justice in the American Civil War, Prof Gandhi said, one of the fighters for justice and human dignity was Theodore Parker who died in 1860 just one year before the start of the Civil War.

He said, “Parker Rejected conventional Christianity and preached about God and the human conscience. In Parker’s time slavery was legal in the United States. He and some others demanded its abolition. In the late 1840s Parker also denounced America’s war with Mexico. In one of his speeches Parker said “I do not pretend to understand the moral universe; the arc is a long one; I cannot calculate the curve and complete the figure by the experience of sight, I can devine it by conscience. And from what I see I am sure it bends towards justice”. According to Prof Gandhi, Parker in his own way was saying Khuda ke ghar me der hai andher nahi (in God’s home there is delay but no denial).

“Repeating the remark more than a century later Dr Martin Luther King Junior often spoke of the arc of the moral universe bending even if slowly towards justice”, said Prof Gandhi.

Presenting examples of Nigeria as a case study, Prof Rajmohan Gandhi said: Nigeria is to Africa what India is to South Asia. With over 210 million living on its soil Nigeria is Africa’s most populous country. More than 100 ethnicities exist there. Since 1960 after independence from British rule, oil rich Nigeria has practiced a political compromise. The country’s presidency has alternated for much of the time between the Muslim inhabitants of the North and the largely Christian inhabitants of the South. Sadly, Nigeria has also alternated with depressing regularity between elected rule and army rule. A constant Nigerian cry is usually raised quit soon after a change from one to the other: misrule and that state is not respecting its citizen and there is corruption. They have deep longing for lasting improvement. Wo Subah Kab aaegi (when the morning will dawn) is very Nigerian question too.

Presenting the case of Lebanon Prof Rajmohan Gandhi said: recently Lebanon seemed to have enjoyed economic success. Lebanon has the ethnic linguistic diversity of India and Nigeria. Like India, Lebanon has practiced electoral democracy. Like Nigeria, Lebanon accommodates competing communities in its governance.

“The system of power sharing in Lebanon at the top has sadly been accompanied by bitter and repeated civil war. Moreover Lebanon has large number of Palestinian and Syrian refugees. Regarded for long as a free democracy, in the year 2013 Lebanon was designated partly free by Freedom House Institute that has been measuring democracy in different nations” he said.

Prof Gandhi added that in August last year with the Lebanese people longing for change to arrive what arrived was an immense explosion at Beirut port destroying scores of buildings, devastating the economy, taking the lives of hundreds and the limbs of many more.

Quoting another example Prof Gandhi said “sorrow of Afghanistan is perhaps even greater than that of Nigeria or Lebanon. Without a pause for more than 41 years explosives from the Soviet Union, from the United States, from fellow Afghans have been blasting there; and every night men, women and children dream of a Rahat ki subah. With or without words they cry in pain and yet despite endless disappointments they also cry with a droplet of hope which is mixed into their anguish”.

Talking about the life and struggles of Frontier Gandhi Khan Abdul Ghaffar khan, Prof Rajmohan Gandhi said, “I was 10 when I saw this towering figure for the first time. In 1945 Frontier Gandhi and his elder brother were staying for a couple of days in our home in New Delhi. My father Devdas, Gandhi ji’s youngest son had known Khan Abdul Ghaffar Khan from the year 1930 when they were in prison together in the town of Gujrat, north of Lahore”.

Prof Rajmohan Gandhi said “when I last met Frontier Gandhi in 1987 when he visited India for the final time, in Mumbai’s Raj Bhawan he told me that patience was prescribed again and again in the Holy Quran, and patience and non-violence were very close to each other”.

“Life gave Khan Abdul Ghaffar Khan tragedies and disappointments. Much of his lifetime was spent behind bar. He did not want India divided. After 1947 he wanted autonomy for Pakistan’s Pakhtuns. He did not get it. Yet until his last breath he continued to respect fellow human beings. At every tough moment Frontier Gandhi said, what pleases God pleases me. He seemed to believe that one day justice would come”.

University of Bremen: Brain research: advantages of the new…

Recounting events of hate and conflict between communities in the past and present, Prof Gandhi said, whenever Mahatma Gandhi went to restore peace between divided communities he spoke out against compulsion.

“We can say that Gandhi believed in free speech, frank speech yet his favourite songs give a hint that he thought that history in the end would side with justice. One of his favourite prayer song said that a good person was the one who understood the pain of the stranger. Another song praised those who are ready to walk alone for the truth”, said Prof Rajmohan Gandhi.

Prof Gandhi added there has been a change in the world in the last decade or two. Earlier the world practiced liberty, equality and fraternity, and these were seen desirable norms of society and for nations; and countries enshrined these goals in their constitution. Now however the emphasis is different. Loyalty is the new priority, and loyalty is interpreted in particular ways and we are asked to worship nationalism, again interpreted in certain specific ways. People are asked how authentic is your Americanness?, How sincere is your Chineseness? How true is your Myanmar blood? How true is your Indian blood?

Prof Gandhi commented, now we should ask what is it that makes an Indian an Indian. Is there unique Indian blood that makes you and me an Indian? Is there a specific Indian gene? a particular skin colour? A special religion?, a language that every Indian speaks?

Talking about the recent Presidential elections in the US, Prof Rajmohan Gandhi emphatically said, it is not the President who holds America together, nor is it the Supreme Court or the two Houses of the Congress or Political parties, or even the Constitution. “Individual Americans keep their country going and keep their leaders within bound”, he said.

Discussing the relevance of Sir Syed in today’s world and his vision, Prof Rajmohan Gandhi said: “it has been AMU’s distinction to attract students from all over the world. Sir Syed died in March 1898, almost 123 years ago but he lives, not only in Aligarh but in the hundreds of the places in our planet where AMU alumni live”.

“We honour Sir Syed’s life, his legacy, his fearlessness, his farsightedness; and it was my privilege to write and publish about his life and work”, he said.

Reiterating to promote thinking, dialogue, conversation with fellow being, with one’s own mind and conscience; Prof Rajmohan Gandhi said honest and truthful dialogue may have a connection to the arc of history.

Presiding over the lecture, Prof Tariq Mansoor, Vice Chancellor, Aligarh Muslim University, said education and justice are two pillars of any civilization to live in peace and flourish.

“We owe a lot to our founder Sir Syed Ahmad Khan who realized this and advocated for modern scientific education”, said Prof Mansoor adding that God also commands that we should be just and fair in our deals.

Deliberating upon the violence and conflict in countries like Yemen, Syria and Afghanistan Prof Mansoor said world can learn a lot from the European Union which been by and large a success after two world wars.

Pro Vice Chancellor Prof Zaheeruddin and others were present on the occasion.

iednewsdesk Jun 21, 2021
Since April 2020, Chris has been slowly and methodically documenting the allotment-goers, landscape and seasonal…

University of Bremen: Brain research: advantages of the new…