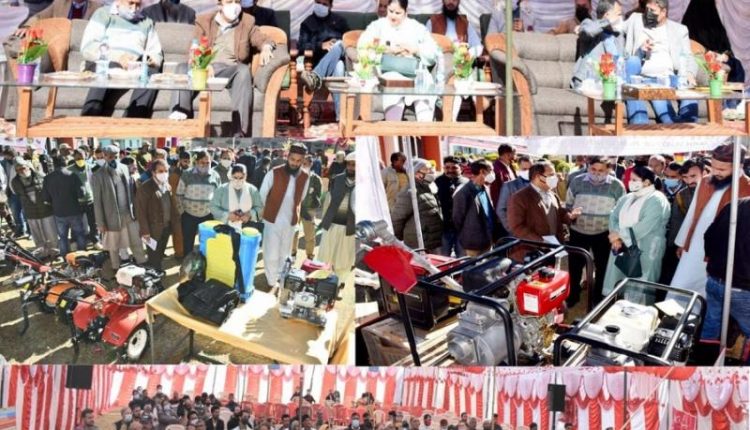 About 300 farmers and Orchardist from different parts of district Kishtwar also thronged the camp.

At the beginning, the DDC Chairperson, the Director Horticulture and the Deputy Commissioner inspected the stalls put up by different departments displaying machinery/tools and some models of the government schemes.

On the occasion, the DC Kishtwar also apprised the farmers present in the programme about the initiative taken by government of UT J&K “Apni Zameen Apni Nigrani” which has been rolled out to facilitate easy online access to the Land Records System. He urged the farmers to participate in the awareness camps in this regard going to be held in district.

Speaking on the occasion, Director Horticulture explained the developmental schemes implemented by Horticulture Department and he also described the incentives being provided to the orchardists under these schemes meant for socio-economic upliftment of these farmers.

Besides, he assured that Horticulture Department will try its best and will be available round the clock to meet the demands of orchardists of the District Kishtwar.

He further informed that this mega programme which has been conducted in the District ahead of the mega plantation drive being conducted by the Directorate of Horticulture throughout Jammu Division w.e.f 14 Nov 2021 aims at more and more participation of youths in horticulture sector.

He said that the district is having a great potential of horticulture which must be tapped and in this regard he appealed the PRI and the field functionaries of the Horticulture department to work in tandem besides asked to play a proactive role to bring tangible result on the ground and to re-double the farmers income.

Onspot instructions were also issued to the officers/officials regarding conducting of more and more awareness / training camps at block/tehsil level so as to impart training on pruning and other horticultural operations besides establishment of high density orchards.

Meanwhile, a colourful cultural programme was also presented by the school students to aware the participants about the importance of trees and afforestation.

The Chairperson District Development Council Kishtwar and the DC applauded the efforts of Horticulture Department for organising the awareness programmes.