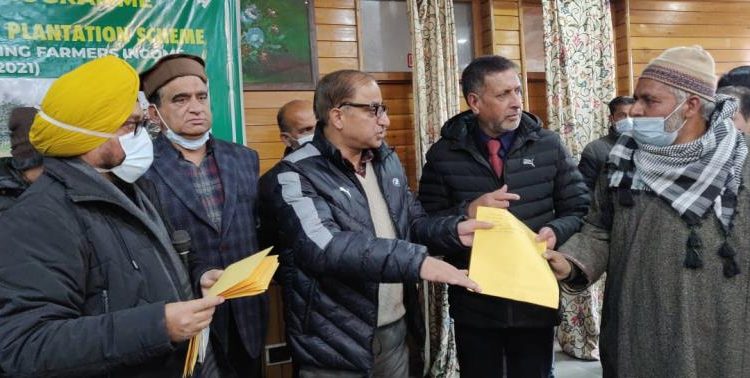 Director General (DG) Horticulture Kashmir, Ajaz Ahmad Bhat was the Chief Guest and DDC Chairperson, Baramulla, Safina Beigh was the Guest of Honour at the function.

Various BDC and DDC members along with PRIs attended the camp besides, President Fruit Grower Association Baramulla/ Sopore, President CA Stores Association, Kashmir and various entrepreneurs also participated in the camp. The camp was attended by a large number of progressive orchardists.

The main purpose of the training/awareness camp was to raise awareness among the farmers about the different departmental schemes in vogue, particularly newly launched Modified High Density Scheme.

At the outset, Chief Horticulture Officer Baramulla, Zahoor Ahmad Bhat highlighted the present scenario of the Horticulture sector in the district and apprised the participants about various developmental schemes including Modified High-Density Scheme.

Addressing the gathering, the DG elaborated in detail about the incentives available under the various central and UT sponsored schemes of the department viz. MIDH, PMDP, SMAM, PMKSY, CAPEX etc. He urged the farmers to come forward and avail the benefits under these schemes.

Regarding the Modified High-Density scheme, Bhat encouraged the farmers of the area, particularly marginal and small farmers to come forward and take the advantage of the newly launched scheme. He also gave on spot instructions to the Chief Horticulture Officer to give wide publicity to all schemes particularly the Modified High-Density scheme by holding awareness camps at village and block levels.

Later, the DG distributed Packing Shed/machinery authorizations among the farmers. He also presented certificates to the students who were provided training in canning and food processing by the department.