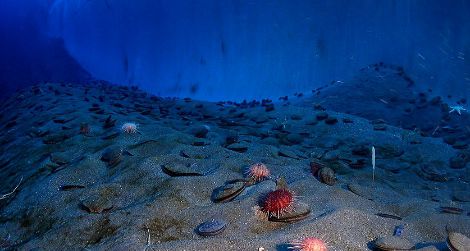 How hot is too hot for life deep below the ocean floor?

When does it get too hot under the ocean floor so that microbial life is no longer possible? This question is the focus of a scientific collaboration between the Japan Agency for Marine ‐ Earth Science and Technology (JAMSTEC) and the MARUM – Center for Marine Environmental Sciences.
An expedition as part of the IODP ( International Ocean Discovery Program ) drilling program in 2016 provided new insights into the temperature limits of life below the ocean floor. The international team has now published the results in the science journal Science.

Sediments that lie deep below the ocean floor are a harsh habitat. Temperature and pressure rise steadily with depth, while the supply of energy becomes increasingly scarce. It has only been known for about 30 years that microorganisms nevertheless colonize the sea floor down to several kilometers.

The deep biosphere is still little explored and raises fundamental questions: What are the limits of life and what determines them? One factor could be the ambient temperature. Thermophilic (heat-loving) microorganisms can exist well up to 80 degrees Celsius. There are also so-called hyperthermophilic bacteria and archaea, which prefer even higher temperatures, but need a high supply of energy to maintain their cells – under ideal conditions in the laboratory they can withstand even 122 degrees Celsius for a short time.

Elaborate deep-sea drilling necessary
But in order to research how high temperatures affect life in the low-energy deep biosphere in the long term, extensive deep-sea drilling is necessary. “Only a few scientific boreholes have so far reached depths at which the sediments are hotter than 30 degrees Celsius,” explains Professor Kai-Uwe Hinrichs, head of the MARUM study up to 120 degrees Celsius hot sediments to explore new scientific territory – and we succeeded. “

Worldwide unique drilling location
Similar to the search for life in space, exploring the limits of life on earth is associated with great technical challenges. Temperatures of 120 degrees Celsius are usually found around 4,000 meters below the sea floor. There is only one way for science around the world to obtain samples from such depths: the scientific deep-sea drillship Chikyu.

To simplify the drilling, a location in the Nankai Trench off Japan was selected. Although this sampling location is 4.8 kilometers deep, the geothermal gradient here, which is steeper than average, enabled 120 degrees Celsius to be reached with a bore that is only 1,180 meters deep.

“Amazingly, the microbial population density already collapses at a temperature of around 45 degrees,” says co-expedition leader Dr. Fumio Inagaki from JAMSTEC . “It’s fascinating – in the hot ocean floor there are extensive, seemingly almost lifeless depth intervals. And then we were able to detect cells and microbial activity again in deeper, even warmer zones – up to a temperature of 120 degrees. “
While the concentration of vegetative cells decreases sharply and moves at over 50 degrees Celsius to a low level of less than 100 cells per cubic centimeter of sediment, the concentration of endospores increases rapidly and reaches a maximum at 85 degrees Celsius. Endospores are dormant cells of certain types of bacteria that are reactivated and can switch to living mode as soon as circumstances permit. “Some specialists can adapt to these difficult conditions and are able to remain in a kind of deep sleep over geological time periods,” adds Inagaki.

Improved detection methods
Much of the research in this project took place on the edge of what is technically feasible. “Within the last twenty years, many detection methods have been significantly improved, some of them are now a hundred thousand times more sensitive,” explains co-expedition leader Dr. Yuki Morono from JAMSTEC . In order to be able to reliably detect the microbial life that is only sparsely present in the sediments, which are over 50 degrees Celsius, it is crucial to avoid contamination. Therefore, the processing of the samples was monitored by strict contamination controls, and samples were taken by helicopter to the clean room laboratories of the IODP for particularly critical workCore repository in Kochi, Japan. “Without some of the research on land, in a high-quality and controllable research environment, the goal of the expedition would not have been achievable,” said Morono, who led the research on land during the expedition.

International cooperation
“The results of our expedition are surprising. They show that at the bottom of the biosphere, lethal limits and chances of survival are close together. We didn’t expect that, ”says co-expedition leader Dr. Verena Heuer from MARUM, “and this gain in knowledge would not have been possible without the strong interdisciplinary team and its committed cooperation.”

43 authors from 29 institutes collaborated on the article, which has now been published; people from nine nations were involved. The study was carried out by Expedition 370 as part of the IODP international ocean drilling program . One goal of IODP is to explore the deep biosphere. “With each expedition, technical and analytical methods are further developed, each time people with diverse experiences and new ideas come together to answer a scientific question together,” adds Heuer, “and that is what makes it so fascinating. Every drilling opens a window to new knowledge. “

Texas hemp farmers will be able to conduct potency tests for management purposes at three locations.