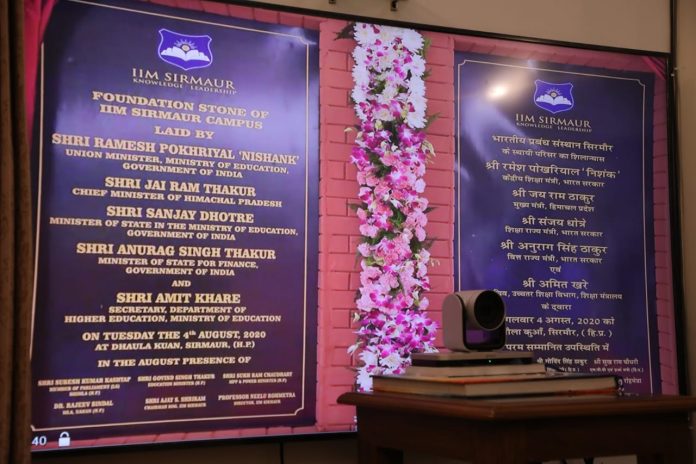 Speaking on the occasion, the Education Minister said that Union Government under Prime Minister Shri Narendra Modi Ji had taken decision in 2014 to establish seven new IIMs including IIM Sirmaur to fill the gap between demand and supply of corporate leaders created by the then existing IIMs. He added that on 15th August 2014 it was announced that the IIM for Himachal Pradesh would be set up at Dhaulakuan in the Sirmaur district. On 12th March 2015, the State Govt. allotted a 210 – acres land at Dhaulakuan for development of the permanent Campus of the Institute.

The Minister informed that IIM Sirmaur was operationalized by IIM Lucknow in August as the mentor Institution with the commencement of the first batch of PGP of 20 students, from its temporary Campus at Paonta Sahib, Sirmaur, Himachal Pradesh. And since then the Institution is progressing well and is scaling new heights academically and infrastructurally. He further informed that the current academic activity is operationalised from temporary campus which is fully residential for students with all modern facilities. The students are not only pursuing academics but also engaged in various cultural, sporting and CSR and community outreach activities.

The complete full-fledged permanent campus at Dhaulakuan has been envisaged for the student strength of 1170 in 210 acres of land. The Minister highlighted that the Union Government has sanctioned an amount of Rs. 531.75 crore out of which Rs.392.51 Crores is for construction works covering the area of 60384 square meters in the first phase which caters to 600 students.

Shri Pokhriyal said that MBA students are future corporate leaders, wealth creators and responsibility lies heavily on their shoulders to provide right direction to business and industry to make Aatm-nirbhar Bharat, as per the vision by our Prime Minister Shri Narendra Modi Ji. Education is the key to the task of Nation building. We need to promote research and innovation in our institutions and create an eco-system of excellence. He assured the support of MHRD to IIM Sirmaur in establishing its world class infrastructure. The Minister was confident that IIM Sirmaur will create its own identity and niche in management education and allied areas and will achieve its vision “To be a Globally Respected Institution for Management Excellence”.

Addressing the participants Shri Dhotre said that Indian Institute of Management Sirmaur is one of the newest IIMs in the prestigious IIM family established by the Government of India. IIM Sirmaur in September 2015 commenced its operations with the first batch comprising 20 students, from its temporary Campus at Paonta Sahib, Sirmaur, Himachal Pradesh. He added that over a period of less than 5 years, it has student strength of over 300. This speaks of the hard work put in by the Management, Director, the Board to steer academic activity in required direction. As institution of National importance and as belonging to league IIM, it is worth noting the progress the Institution has made in short span of time with its alumni positioned suitably in the corporate roles. The Minister extended his wishes to IIM Sirmaur community for operating soon from its permanent campus at Dhaula Kuan in the lap of nature.