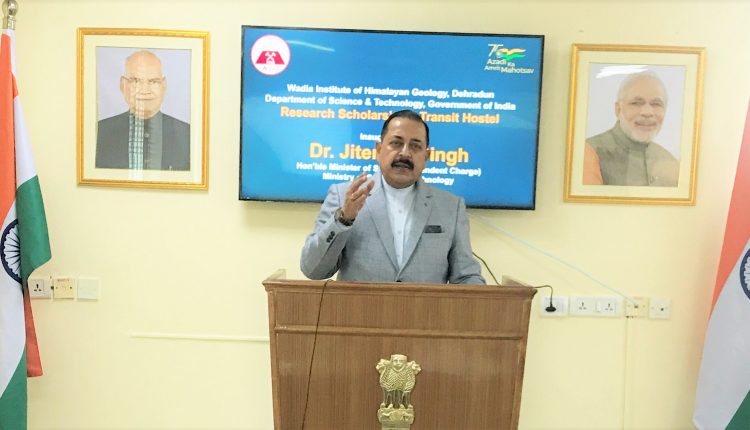 Huge Himalayan geo-resources are yet to be fully explored, which can in many ways contribute to the socio-economic development of the Himalayan region as well as the country as a whole, says Union Minister Dr.Jitendra Singh

New Delhi: Union Minister of State (Independent Charge) Science & Technology; Minister of State (Independent Charge) Earth Sciences; MoS PMO, Personnel, Public Grievances, Pensions, Atomic Energy and Space, Dr Jitendra Singh said that the huge Himalayan geo-resources are yet to be fully explored, which can in many ways contribute to the socio-economic development of the Himalayan region as well as the country as a whole. He noted that the main Himalayan resources are its glaciers and snowfields which feed billions of people through irrigation, industry, hydropower generation, etc.

Speaking after inaugurating Research Scholars’ and Transit Hostel at Wadia Institute of Himalayan Geology (WIHG), the Union Minister said that the hostel was a much-needed aspiration for the researchers, particularly the women researchers and it will surely facilitate a comfortable work environment.

Dr.Jitendra Singh said that about 60 doctoral and 12 post-doctoral students are pursuing research in different aspects of Himalaya based on Geoscientific investigation at WIHG and the institute is fully equipped with state-of-the-art analytical facilities and data processing centres that are generating quality data not only to fulfil the need of in-house researchers but also for the researchers from other institutes and universities. However, established in 1968, WIHG did not have a Research Scholars’ & Transit Hostel, which has now been provided with this 40-room Hostel. The Minister said that this upgradation will now enable the students to pursue their research for extended hours as well as utilise the in-house laboratory facilities to the fullest extent possible.

The Union Science & Technology Minister noted that WIHG has been a dedicated research institute on Himalayan Geosciences for understanding geodynamic evolution of the mighty Himalaya; scientific explanation of geo-hazards caused by earthquakes, landslides, avalanches, flash floods, etc. with a view to provide an assessment, management and mitigation; and exploration of Geo-resources such as geothermal, minerals, ore bodies, hydrocarbons, springs, riverine system, etc. that can be exploited in a scientific manner for socioeconomic development. He said that the institute is actively involved in studying glacial dynamics and the climate-tectonic interaction in the present climate change scenario.

The Minister said that it is very important to understand the impact of upstream climate change to high-altitude glaciers, and their consequences to the downstream river system that are feeding billions of people for irrigation, drinking water, industrial & domestic usages, hydropower projects, even to tourists and pilgrimages. Besides providing the impact assessment due to hydropower projects, the institute has also been pursuing the environment impact-assessment related to several other developmental activities in the Himalaya as caused by road construction, ropeway, railway, tunnel, etc.

Dr.Jitendra Singh stated that the corona pandemic, which is the biggest health care crisis, lock down and social distancing have impacted the economy severely, and the Government is desperately looking for scientific invention and technological breakthrough that can help build resilience and strong emergence of economy. The Minister maintained that the Geosciences can play a pivotal role in growth of several sectors in the country such as the Energy security, Water security, Industrial expansion, Management and mitigation of geo-hazards, Climate change impact on ecology and biodiversity, Conservation of environment etc.

The Union Minister was of the view that the researchers in the Himalayan terrain have a different role than the researchers involved in issues related to the plains. He noted that there are about a thousand glaciers and an equal number of glacier lakes in the Uttarakhand Himalaya. Satellite data are generally used for a quick reconnaissance to derive a first-hand information about the dimension and number of glaciers or glacier lakes over a large and inaccessible area, but the land-based data, wherever possible, are essential for ground-truth validation and accurate modelling.

Dr.Jitendra Singh said that WIHG has been monitoring several glaciers in Uttarakhand, Union Territory of J&K, Ladakh and Sikkim, and has envisaged a plan for long-term monitoring of glaciers and lakes on continual mode by establishing a network of meteorological, hydrological, seismological stations, online transmission of data through VSAT/GSM, automatic analysis/modelling, and integration of data through AI/ML algorithms 24X7, setting up standard operating procedure (SOP), issuing alert to stakeholders, sensitization to locals for responding at the time of consequences for effective execution of an early warning system is the need of the hours.

Dr. Singh said that the intensity and frequency of landslides have been increased recently due to excessive rainfall, which have been felt by both the Uttarakhand and Himachal Pradesh Himalaya. To meet the requirement, WIHG has prepared the landslides susceptibility maps in regional scale for both the states, and in local scale for the Nainital and Mussoorie towns, and Bhagirathi, Goriganga and Kali rivers valley, which can be used for the city developers, planners, local administrators to avoid the consequences.

The Union Minister said that we need to understand the cascading effect from earthquakes to landslides to flash flood and the Bhagirathi basin is a classic example for such phenomenon, due to recurrent landslide/mass movement activities, close proximity to the tectonically active and earthquake-prone MCT zone. Studies on multi-hazards and cascading processes, risk evaluation, debris flow simulation and mass movement modelling are to be strengthened.

Dr.Jitendra Singh highlighted that the Himalayan georesources are huge, which can contribute to the socio-economic development of the region in many ways. He noted that the main resources are the glaciers and snowfields, which feed billions of people for irrigation, drinking water, industrial & domestic usages, hydropower generation, even tourists and pilgrimages. The WIHG has mapped 40 geothermal springs each in the Uttarakhand and Himachal Pradesh Himalaya, and has been trying to generate 5 MegaWatt of electricity at initial stage by a binary power plant at Tapovan. If successful, this will be expanded to all geothermal fields for space heating and conversion into electrical energy without any carbon footprint.
Additionally, Dr Jitendra Singh said, it has the potential to create local jobs for migrants, attract tourists, establish small-scale businesses like building hot-water swimming pool, and extract medicinal ingredients from spring water. The Minister pointed out that the Spring-water rejuvenation and river-water regeneration can contribute to the human settlement and agro-economy of our country. Exploitation of available and abundant mineral resources in a scientific manner is another domain of socioeconomic development. He said that we can think of innovation for converting hazardous residues into usable products also.