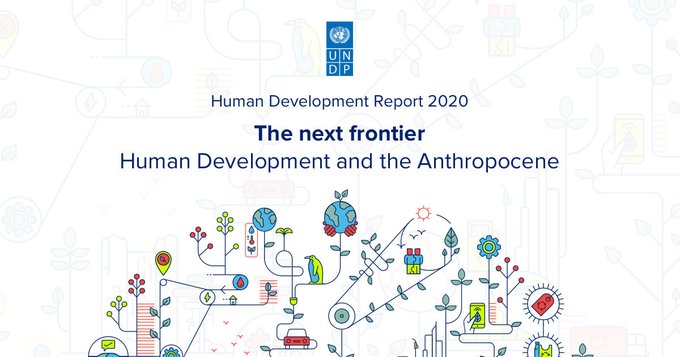 Human development must be aligned with the planet’s wellbeing: UNDP HDR 2020

New Delhi: UNDP India launched this year’s Human Development Report yesterday. The 30th edition of the annual publication of UNDP was launched virtually in the presence of

This year’s HDR focuses on the development by countries with respect to their reliance on natural resources. The report introduces a new index of measurement which accounts for human progress vis-à-vis the carbon emissions and material footprint of countries – Planetary Pressures-Adjusted Human Development Index or the PHDI.

The experimental global index, PHDI, offers a new measurement of human progress that illustrates the challenge of tackling poverty and inequality while easing planetary pressure. By adjusting the HDI, which measures a nation’s health, education, and standards of living, to include two more elements: a country’s carbon dioxide emissions and its material footprint, the index shows how the global development landscape would change if both the wellbeing of people and also the planet were central to defining humanity’s progress.

After taking the PHDI into account, more than 50 countries drop out of the ‘very high human development’ group, reflecting their dependence on fossil fuels and material footprint.

Prof Ramesh Chand said in his address, “This year’s report addresses a very important concern, which was long due. The PHDI is a revealing interpretation of human development – how much we are depriving our future generation. The report offers solutions which will lead to 37% reduction in emissions, which in turn will support our climate targets”.

At launch of the Report, Shoko Noda, remarked, “The launch of this report is well-timed, with the Climate Ambition Summit held last week where countries came together to commit to cut down their carbon footprints. It is possible for every nation to increase its human development – longer lives, more education and higher living standards – without destroying the planet, if we work together”.

Renata Dessallien remarked in her address, “Not only does the HDR reflect the progress we have made, but also clearly defines the areas that need more attention, resources and advocacy. Climate change is clearly emerging as one of the biggest challenges of our times, and rightly this year’s HDR focuses on how human development is connected with the climate crisis. This combination forces us to rethink our lifestyle, behaviours and decisions to ensure that this era does not end up taking us off the deep end. It presents examples from countries around the world and how each of us can get inspired from them.”

The report argues that as people and planet enter an entirely new geological epoch, the Anthropocene or the Age of Humans, it is time to for all countries to redesign their paths to progress. This could be done by fully accounting for the dangerous pressures humans put on the planet, and dismantle the imbalances of power and opportunity that prevent change. The COVID-19 pandemic is the latest crisis facing the world, but unless humans release their grip on nature, it won’t be the last. Most of the people vulnerable to the rise in sea levels live in developing countries, and particularly in Asia and the Pacific. Environmental shocks are already a leading source of forced displacement in the world with estimates that as many as 1 billion people worldwide could face forced displacement by 2050.

The HDR further lays out that public action, can address these inequalities – examples include increasingly progressive taxation and protecting coastal communities through preventive investment and insurance, a move that could safeguard the lives of 840 million people who live along the world’s coastlines. But there must be a concerted effort to ensure that actions do not further pit people against planet.

Based on the report, UNDP India proposed solution mechanisms based on three pillars of nature, incentives and social norms to manage the complex issue of development. Mangrove conservation in coastal areas, incentivising usage of solar power and discouraging single use plastic were some of the areas respectively that it emphasised. The Report also mentions the National Solar Mission and the ambitious renewable energy targets that India has adopted.

The next frontier for human development will require working with and not against nature, while transforming social norms, values, and financial incentives, as per the report.

To learn more about the 2020 Human Development report and UNDP’s analysis on the experimental Planetary Pressures-Adjusted HDI, visit http://hdr.undp.org/en/2020-report