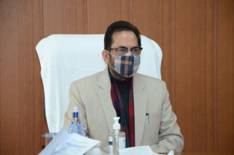 HunarHaat to be organised in several cities in coming months

New Delhi:Union Minister for Minority Affairs Shri Mukhtar Abbas Naqvi announced today that the next “HunarHaat” will be organised at Numaish Ground, Rampur(UP) from 18th to 27th December, 2020 and Shilp Gram, Lucknow(UP) from 23rd to 31st January 2021 with the theme of “Vocal for Local”.

Uttar Pradesh Chief Minister Shri Yogi Adityanath will inaugurate the “HunarHaat” to be organised at Lucknow from 23rd January, 2021.

Shri Naqvi said that all the necessary guidelines regarding Corona and sanitisation, mask, hygiene, cleanliness will be strictly followed at “HunarHaat” in Rampur and Lucknow. He further said that while on hand, indigenous products of master artisans will be a major attraction at “HunarHaat” in Rampur and Lucknow, on the other hand people will also enjoy traditional delicacies from almost every corner of the country at “HunarHaat”. Besides, different cultural programmes on the theme of “JaanBhi, JahaanBhi”, will be presented every day by renowned artists, will also be a major attraction.

Shri Naqvi explained that “HunarHaat” has been proved to be an effective platform to strengthen Prime Minister Shri NarendraModi’s mission of “AatmaNirbhar Bharat” and commitment to “Vocal for Local” by promoting and encouraging indigenous products of master artisans and craftsmen.

The Minister disclosed that “HunarHaat”, which has provided employment and employment opportunities to more than 5 lakh Indian artisans, craftsmen, culinary experts and other people associated with them in the last 6 years, have become popular among the people. “HunarHaat”, which provides market and opportunity to master artisans and craftsmen from remote areas of the country, has become a credible brand of rare exquisite indigenous handmade products, he added.

Shri Naqvi announced that in the coming days, “HunarHaat” will be organized at Jaipur, Chandigarh, Indore, Mumbai, Hyderabad, India Gate-New Delhi, Ranchi, Kota,Surat/Ahmedabad, Kochiand other places. Dates of these “HunarHaat” will be finalised soon.