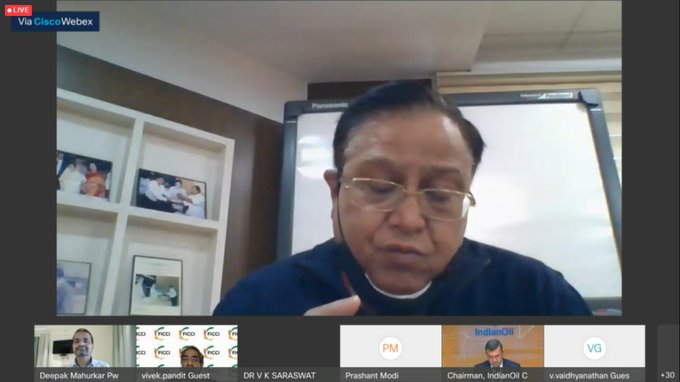 Hydrogen has the potential to empower the energy transition in India: Dr VK Saraswat

New Delhi: Dr V K Saraswat, Member, NITI Aayog, today said that Hydrogen has the potential to be a powerful enabler of the energy transition, as it offers a clean, sustainable, and flexible option for overcoming multiple obstacles that stand in the way of a resilient and low-carbon economy.

?Renewable based transition is the cheapest way of transition and the momentum has picked up in the Hydrogen sector. With finance and proper technology in place, hydrogen can play a key role in India’s energy transition,? he added.

He stated during the session that one of the key factors that would contribute to the success of this transition process will be the regulatory experiences and state of infrastructure form the natural gas sector.

In India, existing hydrogen demand is mainly focused on the chemical and petrochemical sectors and the future requirement is expected to be driven by greater use across transport, industry and power, he said.

?India is moving towards a robust energy mix focusing on sustainable energy resources such as solar and wind. By 2026-27, India is projected to get around 43 percent of its total installed power capacity from clean energy resources,? said Dr Saraswat.

Indian transportation sector, he said, is set to rapidly expand and carbon emissions present both challenge and an opportunity. ?Clean hydrogen could cut up to 34 percent of global GHG emissions from fossils fuels and at a manageable cost if policies are put in place to help scale up the technology and drive cost down,? Dr Saraswat added.

Dr Saraswat said that the regulations and policy initiatives being formulated for promoting Hydrogen economy for graded penetration in the market with a focus on self-reliance will be crucial in the Indian context.

He added that the government is working towards analysing the current situation and carrying out research and development in all the applicable and innovative areas of the mission hydrogen.

As a major take away, It was pointed out during the session that one of the key factors that would contribute to the success of this transition process will be the regulatory experiences and state of infrastructure form the natural gas sector.

Mr S M Vaidya, Chairman, Indian Oil Corporation Limited said that India needs to position itself to be a technology maker and not a technology taker. He further stated that keeping ahead of the technology curve is a matter of strategic importance and India needs to be at the frontier of technological advancements.

?Our organization understands the power of hydrogen as an energy carrier, we see its potential across the economy, in mobility, industrial heating, domestic and commercial uses and the power sector,? said Mr Vaidya.

He further said that hydrogen as a solution to a sustainable and secure energy future is gaining much momentum globally. ?We are focussed on making a significant contribution in developing the hydrogen economic infrastructure in the country,? added Mr Vaidya.