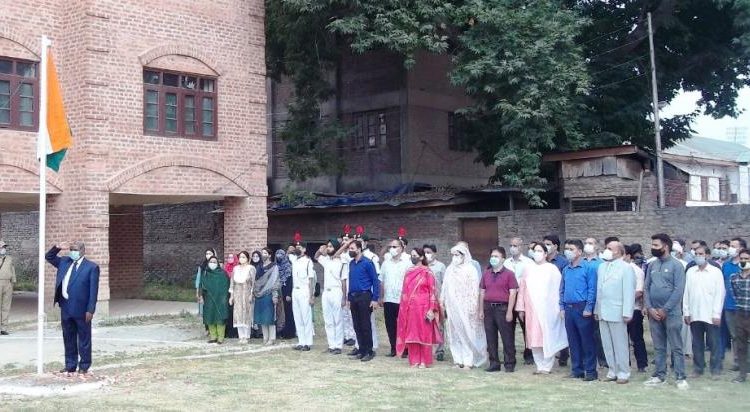 Dr. Hina Shafi Bhat VC-KVIB was the Guest of Honour at the grand function. The celebration was attended by the officers/officials of the Department and a good number of orchardists and students also participated.

The DG extended good wishes to all the participants and in his address highlighted the achievements of the Department.

After the speech of the Director General, various cultural items were presented and patriotic songs were played. On the occasion 20 progressive orchardists were felicitated for their commendable job in the field of Horticulture. They were presented with an appreciation certificate, a memento and cash award. In the event stationery items were also distributed among school children.

At the end, DG thanked all the participants including civil and police administration, especially Army’s 123 Infantry Battalion (TA) Grenadiers for their cooperation.

The Director on the occasion extended heartiest greetings and best wishes to the general public and especially to the farming community. He said that Independence Day celebration shows the country spirit of patriotism and also inspires the young generations to serve the country.

The Director shared some of the notable achievements of the department which has helped in changing the overall agriculture scenario of the region.

All staff members of the university, including senior officials like Dean Academic Affairs, Incharge Registrar and Deans of various faculties were present with the National Anthem being played on the occasion.

In his message on the occasion, the Vice Chancellor emphasized on the significance of the 75thIndependence Day, stating that the country has come a long way as the world’s largest democracy.

“While celebrating this occasion, we should also remember the freedom fighters who dedicated their lives for the independence of the nation,” said Prof. Qayyum.

The Vice Chancellor referred to various programmes being conducted by the constituent colleges of Cluster University Srinagar as part of ‘Azadi ka Amrit Mahotsav’ commemorating the 75 years of Indian independence.

“In order to ensure wide participation and awareness for the Mahotsav, the constituent colleges organized a series of programmes including webinars, essay, slogan writing and painting competitions. The objective was to ensure involvement of students as we recall the spirit of sacrifice and patriotism that secured independence for the nation,” said Prof. Qayyum.

UPMC: UPMC and the University of Pittsburgh Mourn the Passing of Dr.…

University of Nottingham: New University spin out to deliver faster…

Poster making and slogan writing events were held and extempore…