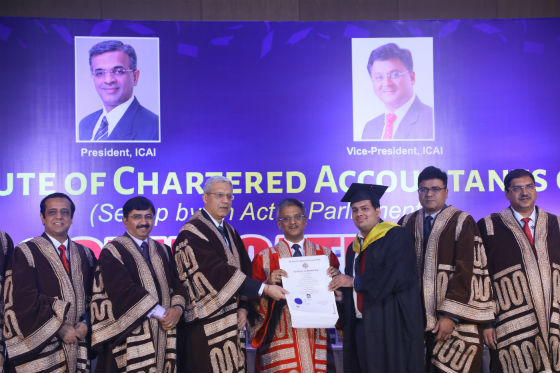 During the Convocations organised at all 5 regions, in total Associate Certificates were awarded to 8454 members as per details mentioned below.

CA. Nilesh S. Vikamsey, President, ICAI extended his best wishes to the new entrants to the profession as well as rank holders and congratulated all of them on becoming successful CA professionals. He said “We are living in an era of globalization and liberalization. There are no geographical borders for trade and commerce. The interdependence and linkages have become closer and dense. This places a large responsibility upon CA profession.” President, ICAI also encouraged the members to have a focused vision and chalk out their career path accordingly.

CA. Naveen N D Gupta, Vice-President, ICAI said “The achievements and success of our members bear testimony to the high standards of excellence at ICAI. You are armed with a truly excellent education, which will not only enable you to succeed in life but will also help you to contribute towards the growth of the society and nation. You must, therefore, see yourselves as leaders.”