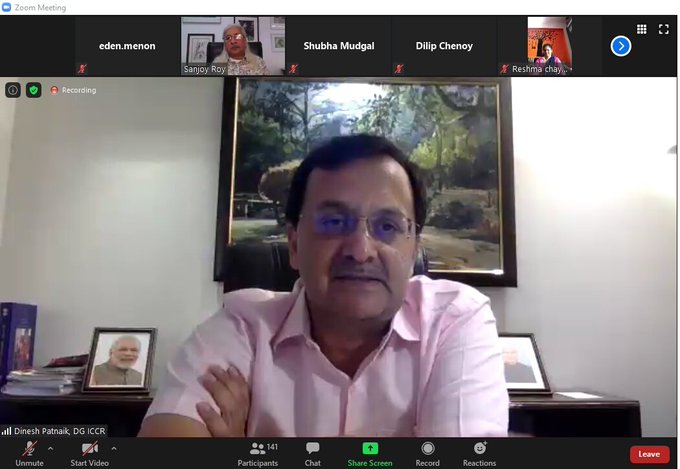 New Delhi: Mr Dinesh Patnaik, Director General, Indian Council for Cultural Relations (ICCR) today said, “I am open to ideas. Let us work together,” at a webinar organized jointly by ICCR and FICCI on ‘Art and Cultural industries – The COVID Crisis and Rising out of it’.

Mr Patnaik highlighted the new initiatives taken by ICCR during COVID to help support the artists across the country. He said that the State has a great responsibility in supporting the sector. Art and Cultural industry contribute much more to the revival of the economy. “Artists don’t need handouts, they need work. We should be able to continue our activities,” added Mr Patnaik.

Talking about going digital with performances, he said that going online may continue even post COVID as we are able to reach out to a larger audience across the world.

Mr Patnaik further said that ICCR is working on a platform where we can have recording every week. In India, it is important to take the recording to the artists, tie up with local recording studios and bring the artists to the world. “It is also important to train the artists for digital media and record quality shows to be taken overseas, protect his IP and ensure that he earns money,” he stated. Mr Patnaik shared that ICCR has been working in this direction and will soon come out with this platform. “ICCR has also planned a series of events online globally,” he added.

Commenting on the digital showcasing of shows and performances, Ms Shubha Mudgal, Indian Vocalist, said, “If we have to solve a problem, we have to accept the problem. Problem in India in going digital with art performances is that of the bandwidth,” she added. To solve this issue, data packages can be given to artists and an increased bandwidth can help them expand their reach digitally, said Ms Mudgal.

She further said that Zoom or other applications are not good for Indian musical instruments as they are not suited for them. She suggested if new Indian applications can be developed and used for Indian performing arts.

Ms Mudgal said that online shows bring another issue to the forefront- the online use of Copywrite material. She was of the opinion that perhaps the copywrite companies can waive off the fee if the artist can acknowledge the creator of that particular art work, be it music, dance or any other form of art.

She was also of the opinion that during these times when companies are running videos of their old shows, they should make some kind of monetary payment to the artists and the viewing should also be ticketed even if for a nominal amount which can be used for the artists.

Ms Mudgal said, “If we want to hear a work of artist, why should we not pay? Time has come for public to pay for use of content.”

Talking about FICCI’s engagement and leadership as an industry association in working for the Art and Cultural industry, Mr Dilip Chenoy, Secretary General FICCI said that FICCI is situated in the midst of the cultural hub of Delhi and is very much engaged with the sector. “COVID 19 has had an economic impact and a severe emotional impact on the artist community in India. Crisis, has brought about a lot of creativity and innovation in the sector with interesting development in online showcasing, musicians are streaming music online, perhaps be a new beginning for the sector,” he added.

The panel also discussed the importance of having a world class infrastructure available to the artists when they go on shows overseas. Highlighting the issues related to funding, it was felt that the states and the industry have always supported the art and cultural industry, and if HNIs can also support then it will be great.

Mr Sanjoy Roy, Managing Director Teamwork Arts Limited acknowledged the great work being done by some of the artists to support the artist community.

He emphasized the need for a policy to support of the sector. While some action has been taken by the govt- where FICCI had shared protocols to open heritage venues and museums, theatre and performing art venues. There is also the suggestion to release funds due against the grants from last year, he added and suggested to look at the existing schemes and if they can be innovatively used to support the artists, not just the registered ones but the independent artists, the technicians, and the independent artists not aligned to any organization.

The meeting was attended by artists and companies from across the country and also by guests from overseas.

“One Nation One Digital Platform will ensure equitable, accessible, affordable and quality education for all”, said Union Minister Sanjay Dhotre