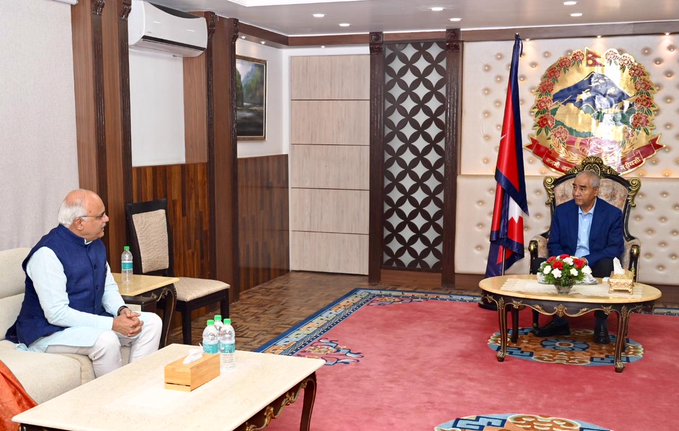 He discussed ways to further strengthening of age-old bilateral cultural relations with Nepalese Prime Minister Sher Bahadur Deuba.  The ICCR President, who is on a two-day visit to Nepal to strengthen cooperation between India and Nepal in cultural and educational sectors, also paid a courtesy call on the country’s President Bidya Devi Bhandari and discussed the institution’s initiatives to deepen cultural and educational relationship between the two neighbouring nations, the Indian Embassy tweeted.

Sahashrabuddhe also interacted with over 200 members of the “India-Nepal Alumni Network” and highlighted the contribution of alumni in strengthening India-Nepal relationship.  Sahashrabuddhe said that in today’s world there is a need for working with mother nature for the benefit of mankind rather than conquering it, and emphasised upon the need to share experience and knowledge with each other for the benefit of both the peoples. Sahashrabuddhe, in the interaction programme organised by Swami Vivekananda Cultural Center (SVCC) in Kathmandu also shed light on the important role played by Nepali alumni to strengthen people to people relations between the two countries. The ICCR President, during the event, also presented ‘India Alumni Card’ to selected alumni, said a tweet by ICCR in Nepal. “Had a wonderful interaction with invitees mostly from the world of arts, culture, public affairs, and politics at a dinner meeting hosted by the Embassy of India in Nepal,” tweeted the ICCR President.

In his meeting with Nepalese Minister of Education Devendra Paudel, the ICCR President discussed ways to strengthen cooperation between India and Nepal in the education sector.