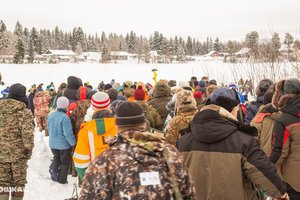 On February 27, in the village of Kuganavolok, on the territory of the Vodlozersky National Park, an ice fishing festival was held, which brought together about three hundred fishermen and fishwomen from different parts of the North-West. Among the participants there are students of PetrSU.
The participants had to compete for the titles “The Biggest Catch”, “The Biggest Fish”, “The Smallest Fish”, “The Youngest Participant”, “The Luckiest Fisherman” and “The Fisherman Who Caught the Symbol of the Festival”, but most of them still came to relax in nature.

The guests of the festival have not been forgotten! While the fishermen were sitting on the ice, the rest could visit a tour of the Vodlozero national hut, ride a snowmobile – this opportunity aroused special delight among children, just like a slide with cheesecakes, take part in various master classes, buy souvenirs, local honey at the fair, a T-shirt with aphorisms about fishing and much more. But what a fishing trip without fish soup! As many as three types of fish soup were prepared at the festival, the menu included navy-style pasta and delicious tea with pastries. Everyone took part in a win-win lottery and warmed up with the warmth of the voices of the Vodlozerochka national ensemble.

The festival has been held for the 10th time already, the fourth time it takes place in winter.

I am very glad that such a large festival is held not in the capital of Karelia, but in a small village near Pudozh – this helps to develop local tourism. It also takes place on the territory of the national park, where guest houses are built from environmentally friendly materials and they work on solar panels – we lived in one of these: a view of Vodlozero, warm, cozy and all the benefits of civilization are available. The place is very picturesque and you can find something to do at any time of the year. We look forward to the next event and recommend you to visit it! said student Alina Artemova.

Literally a month ago, the Department of Tourism of PetrSU received an invitation from the Administration of the Kuganavoloksky rural settlement to form an expedition to the region, now both sides are actively planning a future meeting.