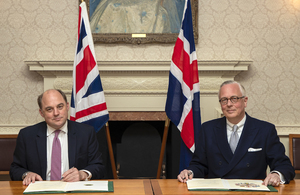 Defence Secretary Ben Wallace and Iceland’s Ambassador to the UK Sturla Sigurjónsson today signed a Note of Joining that welcomes Iceland into the JEF alongside the UK, Denmark, Estonia, Finland, Latvia, Lithuania, the Netherlands, Norway and Sweden.

Iceland’s deep understanding of the North Atlantic and High North environment and its civilian expertise will strengthen the JEF.

Defence Secretary Ben Wallace said:
I’m delighted to welcome Iceland into the Joint Expeditionary Force. As a group of northern European democracies with shared values and committed to a collective response to threats to Euro-Atlantic security, it is natural for us to stand shoulder-to-shoulder with Iceland.

Iceland Minister for Foreign Affairs and International Development Cooperation Gudlaugur Thór Thórdarson said:
We are pleased to be joining the JEF group of likeminded countries for a deeper regional consultation and cooperation on security and defence, as well as on possible coordinated civil emergency and humanitarian assistance.

Iceland looks forward to engaging in a more comprehensive strategic dialogue within JEF and an eventual contribution on a civilian basis.

Chief of Joint Operations Vice Admiral Sir Ben Key said:
Since its establishment in 2014, the JEF has demonstrated that together, we are stronger. Iceland’s inclusion expands the JEF’s expertise and bolsters its collective support of Northern European security.

Iceland’s entry into the JEF also reflects its growing bilateral relationship with the UK on defence and security issues. Our two nations, both NATO Allies, share security concerns about the North Atlantic and the High North region. In 2019 the RAF patrolled over Iceland for the first time since the Second World War as part of the NATO Icelandic Air Policing mission.

What is the JEF?
The Joint Expeditionary Force (the JEF) is a UK-led coalition of ten countries who share a commitment to democracy, human rights and the rule of law as well as a long history of operating together. We also share a determination to global and regional peace and maintaining the security of northern Europe.

The JEF is able to operate wherever in the world any two of its members choose to deploy together. Our particular focus is on the High North, the North Atlantic and the Baltic regions, where the JEF can complement national as well as NATO’s deterrence posture in the region. It is designed to be as flexible as possible and has utility across a broad spectrum of operational activities, including humanitarian assistance and Defence diplomacy.

University of Glasgow: From The Clyde To ‘Citizen Scientists’: New Competition…