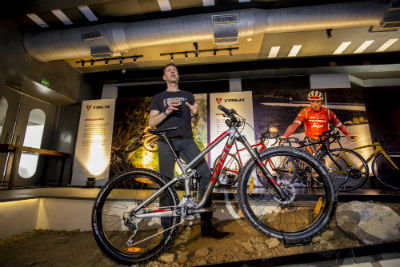 Trek Bicycle was founded in 1976, in Waterloo, Wisconsin, USA, by Richard Burke and Bevil Hogg, who set out to create the best bikes in the world. They fostered a culture of craftsmanship, where every bicycle built was a point of pride. Trek has grown far beyond its modest roots, but to this day every bike made is a testament to the company’s founding principles. Today, Trek bicycles are available at retail locations in 100 countries worldwide. The brand also offers a dynamic range of cycling parts, accessories, merchandise, and riding gear under the brand name Bontrager.

With over four decades’ legacy of driving innovation, Trek is known for building the most technologically advanced bicycles available. Trek pioneered the manufacturing of carbon bicycles in the 1990s, and today continues to build on its tradition of leadership in the industry, applying the same technology used in aerospace and Formula One racing to create the finest bikes for every kind of rider.

Union Minister of Education addresses at the 34th…

Trek bikes are built to last, and everyone is backed by a simple promise from the company: we’ll take care of you and do what’s right. Each model is subjected to extensive testing in the world’s toughest test labs and supported by the best lifetime warranty in the business, all the way back to the very first frames built in 1976.

At the launch event, Navneet Banka, Country Manager, Trek Bicycle India said, “Trek is a heritage brand with commitment to relentless innovation that stems from the founding principle to build bicycles people love. Over the past few years, we have seen a paradigm shift. More and more citizens have become environmental and health conscious, and we believe that the bicycle can play a pivotal role to combat climate change, ease urban congestion, and build human fitness. We at Trek are dedicated to building an environment of leisure and competitive cycling in India.”

Speaking at the event, Jens Voigt, Trek Brand Ambassador said, “I’m very excited to be here in India. It is encouraging to see a lot of fitness enthusiasts take up cycling and the level of professional cyclists in India. Over the next few days, I am looking forward to riding with cycling enthusiasts across Delhi NCR.”

Trek Bicycle India will offer 23 bike models across its dealers in Delhi NCR, Mumbai, Bangalore, Hyderabad, Chennai, and Indore. Trek owners will be able to choose from a wide range of Trek and Bontrager parts, accessories, merchandise, and riding gear. For more information, please visit www.trekbikes.com

Union Minister of Education addresses at the 34th Convocation of IGNOU

iednewsdesk Apr 15, 2021
Nihongo Space, a venue within the Japanese Section of the Institute for Liberal Arts (ILA), has been supporting…