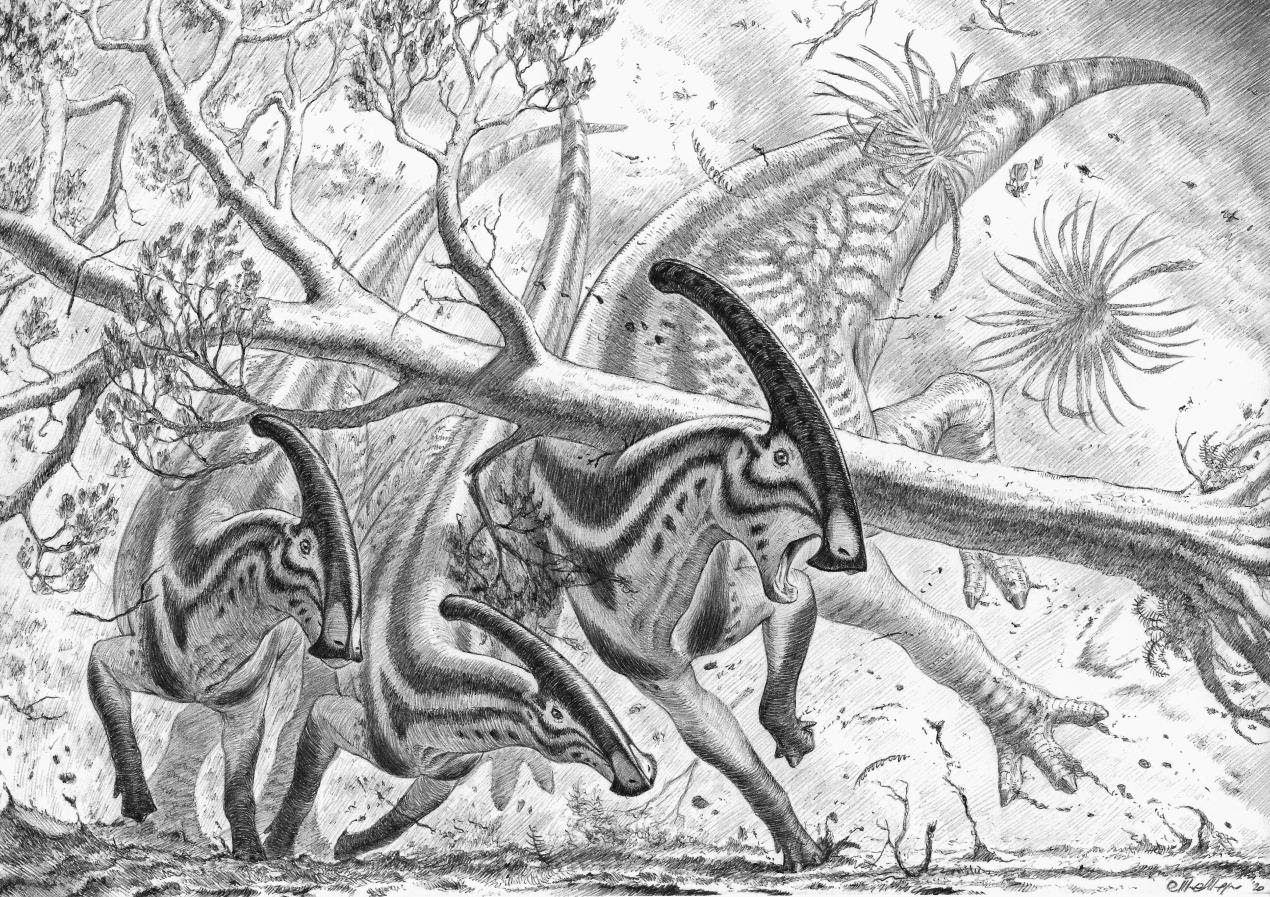 The first Parasaurolophus discovered – the same species which features in the popular Netflix series Jurassic World: Camp Cretaceous – is likely to have been injured by a falling tree, a study led by a researcher from Queen’s University Belfast has discovered.

Filippo Bertozzo, a PhD student from the School of Natural and Built Environment at Queen’s University Belfast, examined the skeleton of the Parasaurolophus which has been on display at the Royal Ontario Museum, since being discovered in Alberta, Canada in 1920.

He and his research collaborators from institutions in Canada, Italy and Liverpool found that the duck-billed dinosaur – known as ROM 768 – suffered several major injuries before its death.

The shape of the dinosaur’s neck has been a source of intrigue to palaeo-artists, who attempt to depict prehistoric life according to scientific evidence, over the decades. In Disney’s 1940 film Fantasia it is shown as having a thin neck with a frill, while later artists portrayed it with a graceful, swan-like neck. More recently, discovery of partially mummified dinosaurs suggested that the dinosaur had a much bulkier neck.

Mr Bertozzo explained: “Our research using paleopathological markers – which help us study the diseases of ancient humans and fossil animals – means we are now fairly certain how this iconic dinosaur would have really looked.

“The ROM 768 suffered numerous injuries which suggest a major incident of trauma before its death and we think a heavy object such as a tree may have fallen on top of the animal, perhaps during a storm.

“Damage to the muscles resulted in a disc-shaped overgrowth on the tip on the bony part of one its vertebrae in its neck.

University of Auckland: Kiwis quite keen on the idea of…

“We interpreted the disc as a secondary enlargement of the base of the nuchal ligament, a large elastic structure that supports the neck and the head.

“This enabled us to reconstruct the anatomical structure of the neck, revealing that it was strong and muscular to support its head.”

Mr Bertozzo’s research has also shown that ornithopods, medium to large plant eating dinosaurs, including Parasaurolophus, iguanodons and other smaller species, were prone to a range of injuries and diseases.

“In the case of the ROM 768, torn muscles and broken bones were also evident in the pelvis, ribs and spine, while a lesion in the mouth may have been caused through the heavy object falling on it.

“The injuries were well-healed, however, demonstrating the resilience of the dinosaur who survived for several months or perhaps even some years after the event.”

Professor Eileen Murphy, a bioarchaeologist in Queen’s, commented: “Palaeopathology has been a relatively neglected aspect of palaeontology until recent years. The study of ROM 768 clearly demonstrates the value of this approach for reconstructing the quality of life of dinosaurs and the threats from the natural environment they may have faced on a daily basis.”

This study was funded by the SPaRK Horizon 2020 research and innovation program under the MSCA? grant agreement with Queen’s, with support from the Dinosaur Research Institute (Canada).

Institutions involved in the research study were the Royal Ontario Museum and the Royal Tyrrell Museum of Paleontology in Canada, the Associazione Paleontologica Paleoartistica Italiana in Italy, and the University of Liverpool.

University of Auckland: Kiwis quite keen on the idea of eating insects

iednewsdesk Sep 25, 2021
“A lot of research is done on mobility at KU Leuven, but we noticed that we were all looking for solutions for…

University of Auckland: Kiwis quite keen on the idea of eating insects

Integration of Science, Engineering and Technology is the key to…