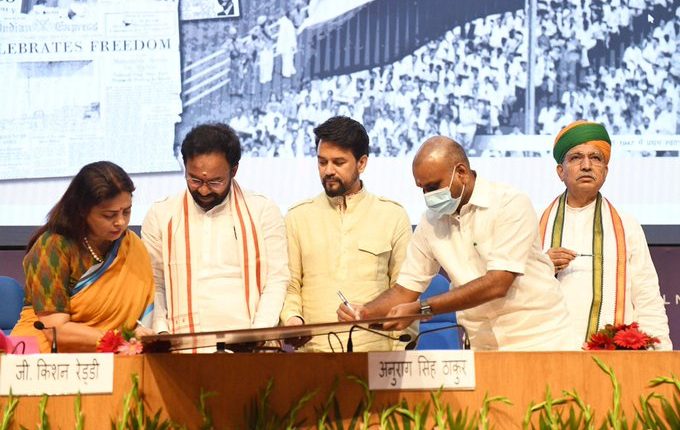 New Delhi: ‘Iconic Week’- the week-long celebration of Azadi Ka Amrit Mahotsav by Ministry of Information and Broadcasting has come to a close yesterday. The celebrations which began on 23rd August saw an enthusiastic participation by all Media Units of the Ministry.

During the week Doordarshan network showcased a series of documentaries such as “Netaji”, “Merger of princely states”, etc. Popular Indian films such as “Razi” were also telecast. NFDC organised a film festival on its OTT platform www.cinemasofindia.com screening a specially curated bouquet of films such as “Island City ”, “Crossing Bridges” etc.

Regional News Units of DD and AIR aired special stories on freedom fighters, places and events of historic importance as part of their daily bulletins and as special programmes. Several Community Radio Stations too pitched in and aired special programmes. Various aspects were highlighted in these programmes including the exceptional contribution, valour, dedication, sacrifices of freedom fighters and unsung heroes of the freedom struggle.

The Regional Outreach Bureaus of Bureau of Outreach and Communication held nukkad nataks skits, magic shows, puppetry, folk recitals through various Integrated Communication and Outreach Programmes and more than 1000 PRTs by Song and Drama Division across the country. Freedom walks were organised in partnership with Nehru Yuva Kendra and NSS Units in States. The Minister of State for I&B Dr. L. Murugan inaugurated an exhibition on freedom fighters organised by ROB in Bengaluru. In a similar event in Bikaner, Union Minister of State Shri Arjun Ram Meghwal inaugurated an exhibition organised by ROB Rajasthan.

The regional units of Press Information Bureau held webinars on various topics across the country. These topics were selected to highlight contribution of heroes from the States during the freedom struggle. In a notable development, Nonagenarian Freedom Fighter Rohini Gavankar addresses PIB Mumbai Webinar on Role of Mumbai in Freedom Movement. The webinar by Bhubaneswar regional unit

Young audience was engaged during the Iconic Week through various quizzes and interactive activities and competitions.

The Iconic Week was centered on the idea of Jan-bhagidari, ie participation of people. The objective of this was to make Azadi Ka Amrit Mahotsav a peoples’ movement instead of it being a Government led programme.