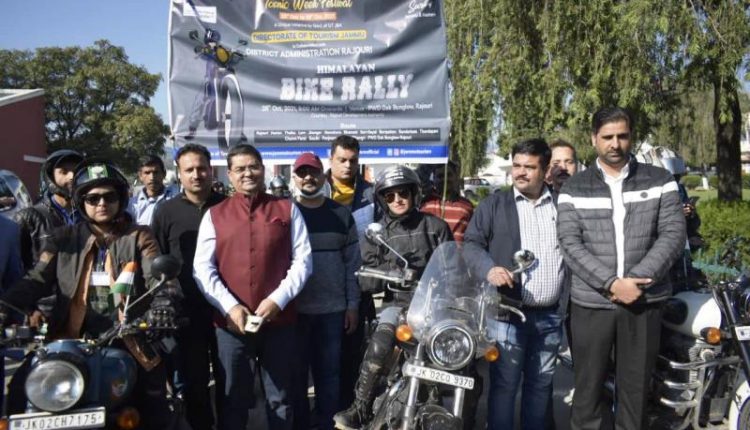 4 girls among 50 youth participate in expedition Youth can play a pivotal role in tourism promotion: DC

RAJOURI : To mark the celebration of Iconic Week Festivals under the aegis of Azadi Ka Amrit Mahotsav, District Administration Rajouri, in collaboration with the Rajouri Development Authority today organised a Himalayan Bike Rally.

The rally was flagged off by Deputy Commissioner, Rajesh K Shavan from lawns of the PWD Dak Bungalow.

As many as 50 bikers including 04 girls and 46 boys participated with added zeal in the rally.

Adequate Security personnel have been deployed along the route from Rajouri, Narian, Thalka, Lam, Jhangher, Nowshera, Bhawani, Seri-Sayal, Beripatan, Sunderbani, Thandapani, Channi Prat, Solki, Panjnara, Sialsui and Dhangri and back to Rajouri and necessary arrangements have been made at reception and culmination site.

Provision of an ambulance along with a team of doctors and Para Medical staff with requisite essential medicines has also been kept available.

Addressing the participants, the Deputy Commissioner said that the objective for organising such events was to harness the tourism potential for economic development of the district.

He said that concerted efforts are being made to boost the tourism sector in the district and a slew of measures are underway to explore all the possibilities for tapping its potential to the full.

“Youth can play a pivotal role in promoting tourism as they are capable of generating powerful ideas and the same would come through their active participation in such tourism promotion activities,” said the DC.

The DC urged upon the youth to play a positive role in the peace, prosperity and development of the district.

He further said such events would continue to be organised in future and sought active cooperation and participation of the public, especially the youth.