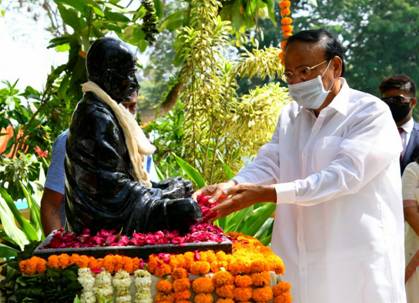 New Delhi: The Vice President, Shri M. Venkaiah Naidu today emphasised the need to maintain civility of words and decency of language in public discourse and said that it is necessary for a healthy and strong democracy.

Addressing the concluding ceremony of the 25-day long ceremonial ‘Dandi March’ organised as part of ‘Aazadi ka Amrit Mahotsav’ in the historic Dandi village of Gujarat, the Vice President asked everyone to take inspiration from Mahatma Gandhi who always used polite and respectful language even for his opponents. “Gandhi Ji’s principle of non-violence was not limited to physical violence alone, rather it encapsulated non-violence in words and thoughts too”, he said adding that political parties should treat each other as rivals not as enemies.

“Azadi Ka Amrit Mahotsav”—a 75 week festival to commemorate 75 years of India’s Independence, was flagged off by the Prime Minister, Shri Narendra Modi from Sabarmati Ashram, on March 12, 2021. The festival celebrates the rapid strides India has taken in the past 75 years. The Vice President said that it is a festival that encourages us to rediscover our hidden strengths and prompts us to take sincere, synergistic action to regain our rightful place in the comity of nations.

Terming Mahatma Gandhi’s iconic Dandi Salt March as a watershed moment in our freedom struggle, Shri Naidu said that it altered the course of history. “The Dandi March we are symbolically revisiting today signifies our nation’s ability to stay united when we are faced with challenges”, he said. Noting that this ability to walk together on the path of development has yielded many positive outcomes, he underlined the need to consistently follow this path in future as well.

The Vice President further said that the message of iconic leaders like Gandhiji and Sardar Patel provide us the inspiration to work together to build an India we all are dreaming of. He stated that it is an India that shares its prosperity with other nations. “It is a nation that cherishes Constitutional values and its rich cultural heritage and has a deep commitment to the welfare of the people in sync with the motto of Sabka Saath, Sabka Vikas, Sabka Vishwas”, he added.

The Vice President said that the coronavirus pandemic proved to be a test of our resilience, spirit of enterprise and innovation. He lauded the researchers, scientists and entrepreneurs who are shaping the vision of an Atmanirbhar Bharat into reality by manufacturing essential items such as PPE kits, surgical gloves, face masks to ventilators and vaccines.

Emphasising upon the spirit of “Vasudhaiva Kutumbakam” (the world is one family), he highlighted that India, while conducting the largest vaccination drive in the world, is also supplying vaccines to a number of countries across the world. “That is the Amrita, the eternal universal vision we have inherited”, he said and expressed his satisfaction that even in these trying times, the country is following Gandhiji’s moral philosophy.

On this occasion, Shri Naidu also lauded the farming community for record production of foodgrains despite severe challenges posed by the Covid-19 induced lockdown. He termed the farmers as the ‘frontline warriors’ who ensured our food security in critical times.

Opining that the ‘Amrit Mahotsav’ should herald the reawakening of a resurgent, Atmanirbhar India, the Vice President said that the purpose of Amrita Mahotsava is to pay tribute to the heroes of freedom struggle and to dedicate ourselves to their ideals and values. He congratulated the 81 volunteers who participated in this ceremonial Dandi March, covering a distance of 385 kilometres in 25 days. Observing that most of the participants in the Dandi March (1930) were below 40 years of age, Shri Naidu noted the role of the Salt Movement in drawing the youth and women to India’s freedom struggle.

Elaborating on Gandhi Ji’s concept of freedom, the Vice President said that he believed that political slavery not only leads to economic exploitation but ruins a society culturally as well. Therefore, the purpose of Gandhiji’s Satyagraha was not just political freedom but moral and cultural uplift of the Nation. He always raised issues such as abolition of untouchability, communal harmony and ‘Swadeshi’, Shri Naidu added.

Quoting an article written by Mahatma Gandhi in Young India in 1931, the Vice President said that ‘Poorna Swaraj’ can not be achieved until a poor gets the same facilities and rights that are available to the rich. That is why Gandhiji made an everyday necessity like ‘salt’ the subject of his Satyagraha.

Talking about the progress made during the past 75 years, Shri Naidu said that over these years, we have strengthened the Nation’s unity & integrity, ensured participation of all sections in democratic process, made ourselves self-reliant in foodgrain production, improved health indices and created physical and electronic infrastructure in the country. He termed these achievements as appreciable and proud-worthy.

Earlier in the day, the Vice President paid homage to Mahatma Gandhi at the Prarthna Mandir and interacted with the marchers who participated in the ceremonial Dandi March. He also visited Saifee Villa where Gandhiji had spent a night of 4 April 1930. After this, Shri Naidu visited National Salt Satyagraha Memorial– a monument that honours the activists and participants of the Salt Satyagraha. Terming his visit to the memorial as a deeply emotional experience, Shri Naidu emphasised the need to create such memorials for all freedom fighters to inspire the younger generation to follow their ideals. He urged the youth to visit the Dandi memorial and take inspiration from the life and message of our ‘Father of Nation’.

During the program, the Vice President also released the Special Envelopes on Geographical Indication (GI TAG) Products of Gujarat State Handicrafts Development Corporation. He also witnessed the mesmerising cultural performance by the folk artists from Sikkim, Chhattisgarh and Gujarat.