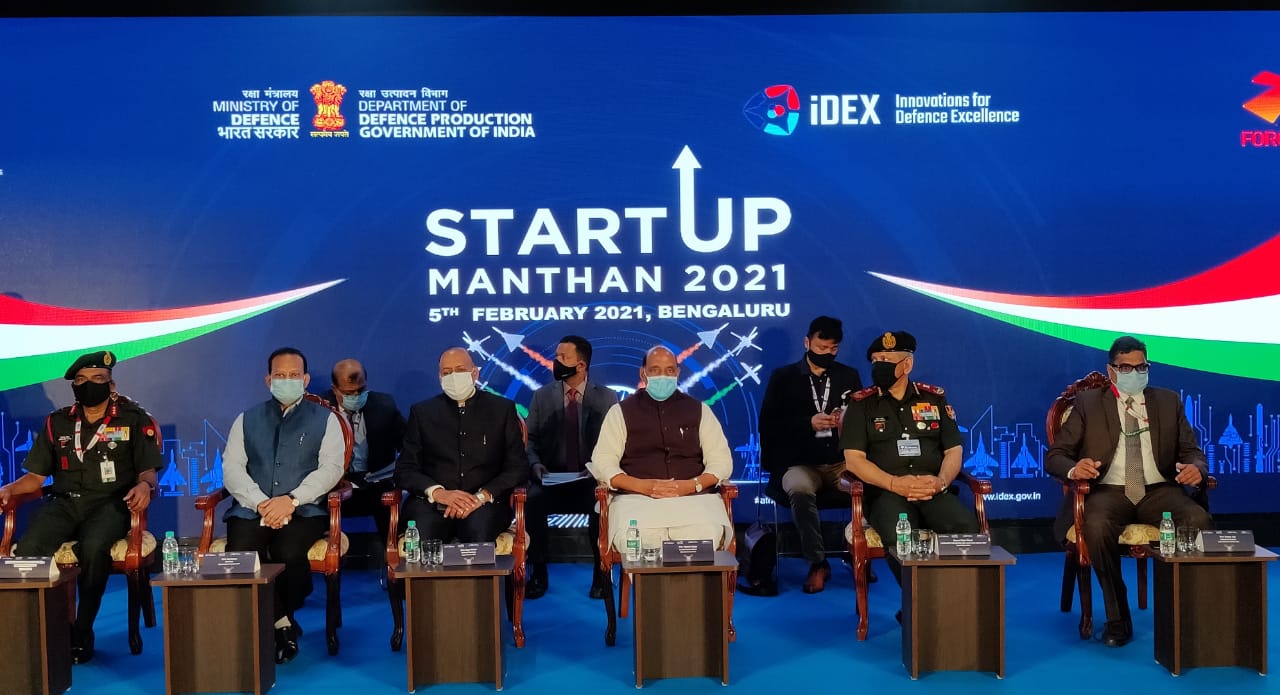 New Delhi: Raksha Mantri Shri Rajnath Singh has revealed that 60 winners out of more than 1,200 start-ups and innovators who participated in Defence India Start-up Challenge (DISC) have received grants of up to Rs 1.5 crore each to build prototypes. In his address at the Start-up Manthan organised on February 05, 2021 at Aero India 2021, Raksha Mantri announced that 45 MSMEs participating in Aero India have received orders worth Rs 203 crore. The annual flagship event was organised on the final day of Aero India 2021. Raksha Mantri asked Ministry of Defence officials to consider increasing the financial assistance extended to winners of DISC start-ups.

Raksha Mantri applauded India’s ambitious start-up program which was started to harness the young talent and entrepreneurship on the clarion call of Prime Minister Shri Narendra Modi. He said Start-up India was based on three pillars – Simplification and Handholding, Funding and Incentives and Incubation and Industry-Academia Partnerships. He applauded the success of Start-up India in creating an ecosystem of more than 41,000 start-ups, 4.7 lakh jobs and Rs 4,500 crore of investment in 384 start-ups through Fund of Funds Scheme.

Shri Rajnath Singh also spoke of steps taken by the government to give a push to start-ups in the defence manufacturing system such as opening up the patents and laboratories of DRDO to private industry, setting up of Young Scientists labs in niche technology areas, programmes like iDEX, Defence India Start-up Challenge (DISC), IDEX4Fauji, etc. He added that the latest version of Defence Acquisition Procedure 2020 allows Start-ups to participate in Make-in India forums and reserves projects up to Rs 100 crore for Micro, Small and Medium Enterprises (MSMEs).

Raksha Mantri said the iDEX initiative is a decisive step towards achieving Self-reliance and is one of the most effective and well-executed defence Start-up ecosystems in the true spirit of the Aatmanirbhar Bharat.

Speaking on the aerospace sector, Shri Rajnath Singh added that 300 plus start-ups are currently engaged and iDEX 10 start-ups have developed the products worth Rs 100 crore which have been displayed in Aero India 2021.

Shri Rajnath Singh also highlighted iDEX4Fauji as an initiative providing opportunities to innovate to the Indian Armed Forces. He further said that iDEX4Fauji opens up a new window allowing Indian soldiers and service personnel to be recognised and rewarded as innovators. He mentioned the Innovations done in the field of Robotics in Maritime applications by Lt. Deepak Suman Kumar and wall penetrating Radar by Major Anoop Mishra as examples.

Speaking of the iDEX Open Challenge, Raksha Mantri added that the initiative creates opportunities for innovators to propose ways to harness technological capabilities and strengthen our nation’s military capability. He ended his address expressing hope that the annual flagship event of Start-up Manthan becomes a milestone in start-up engagement in defence.

Defence Secretary Dr Ajay Kumar applauded the growth of the start-up ecosystem and identified the importance of developing standards for its sustainability in future. He mentioned that start-ups in India had treated the challenge of COVID-19 as an opportunity with funding of over Rs two lakh crore in 2020. He said that India has shown with innovations such as vaccine development, that it is among the leading innovation countries. This changed the confidence profile of Indian youth, which is on display at iDEX, he added.

Earlier, Secretary (Defence Production) Shri Raj Kumar briefed the gathering about the iDEX process and the measures taken by the Department of Defence Production to promote start-up culture and self-reliance in defence. He said that iDEX had been designed to infuse the latest technology into military warfare closely intertwined with the needs of services and to reduce dependence on imports.

Raksha Mantri handed over Certificates of recognition to innovators under iDEX4Fauji and DISC 4 challenges at the event.

Start-up Manthan is organised under the iDEX banner annually. The iDEX was launched by the Prime Minister Shri Narendra Modi in April 2018 with the core aim to create corporate models for Indian Defence needs and allow the defence sector to harness start-ups. Since its launch, iDEX has emerged as a national scale ecosystem bringing together military users and operators with start-ups, innovators and entrepreneurs. The event provided a unique opportunity to firms associated with DIO-iDEX to showcase capabilities, products and services to industry leaders and business decision makers.