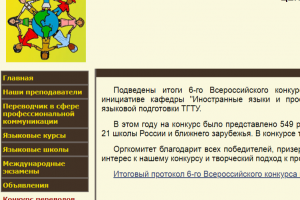 IEP students are winners of the All-Russian Translation Competition

Students of the “Jurisprudence” direction of the Institute of Economics and Law under the direction of O.M. Sherekhova, Associate Professor of the Department of Foreign Languages ​​in the Humanities, took an active part in the VI All-Russian Translation Competition. The competition was held by the Tambov State Technical University on the basis of the Department of Foreign Languages ​​and Professional Communication with the support of the Center for Language Training of TSTU.
This year, 549 works were submitted for the competition. It was attended by students from 14 universities of the Russian Federation, as well as high school students, students of technical schools and colleges.

PetrSU students had the opportunity to take part in various nominations of the competition, such as “Publicistic Text Translation”, “Popular Science Text Translation”, “Literary Text Translation” in English, German and French. The main objectives of this competition were to draw attention to the issues of practical translation and translation theory, encourage and support young people who conduct practical and research work in the field of translation studies. The works were evaluated according to a number of criteria, the main of which are the accuracy of conveying the meaning of the message, strict adherence to the literary norm of the Russian language, adherence to the linguistic norm and the speech uzus of the target language, the use of adequate means of transferring objective information in translation, and others.

Eduard Urumbaev, a 2-year student of the direction “Jurisprudence”, became a prize-winner in the nomination “Translation of a journalistic text”.

Associate Professor of the Department of Foreign Languages ​​of Humanities O. M. Sherekhova was awarded a letter of thanks for the preparation of the winners for this competition.

Students of the “Jurisprudence” direction actively participate in competitions in foreign languages ​​and this is not the first time they become winners and prize-winners at the all-Russian level.