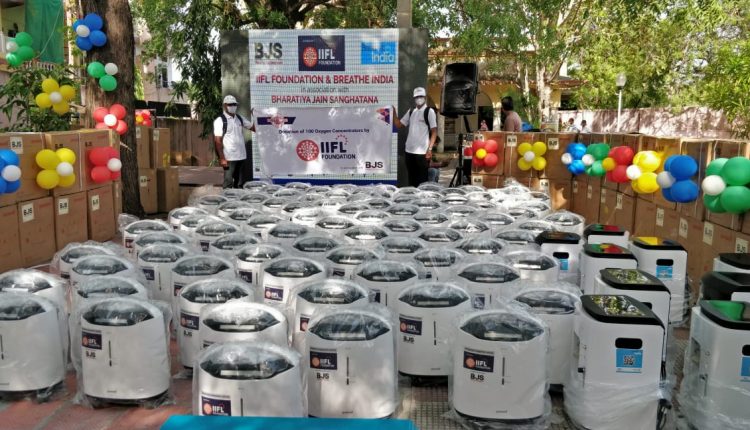 By India Education Diary Bureau Admin On May 31, 2021
Share

Jaipur: IIFL Foundation has donated 100 oxygen concentrators in Rajasthan as a part of its ‘Conquer Covid’ initiative through which it provides health equipment, vaccines, livelihood support and digital education support across India.

Dr CP Joshi, Speaker Rajasthan Legislative Assembly appreciated the efforts of IIFL Foundation not only for health support but also for its Sakhiyon Ki Baadi program which has brought over 36000 out-of-school girls into education fold. He suggested IIFL Foundation to help in expanding digital education to students from underprivileged communities through mobile phones and tablets.

Shri Gulab Chand Kataria – Leader Opposition Rajasthan, “Oxygen concentrators are need of the hour and are immediate life savers. Considering the high number cases and demand this is one of the best initiatives.” He praised the coordinated efforts of IIFL Foundation and BJS.

Mr Nirmal Jain, Founder and Chairman, IIFL Group appreciated the work done by doctors, nurses and other frontline workers and expressed his gratitude towards government and non-government organisations for their immense support and flawless execution of this initiative.

Shri Rajendra Lunker, National President BJS said, “We appreciate the enthusiasm and speed with which IIFL Foundation supported this initiative. This will facilitate proper and timely treatment of patients, and reduction in number of deaths.”

Ms Madhu Jain, Director, IIFL Foundation said, “there are four ingredients – ‘Sasan, Prashasan, Jan Jagrukta and Jan Sahyog’ – essential for the success of any initiative. We are lucky to have all the support of everyone.” Ms Jain also elaborated about digital initiatives undertaken for 1,200 Sakhiyon Ki Baadi schools, which has ensured that their education continued even during the pandemic.

IIFL Foundation had earlier in the month of May donated 40 oxygen concentrators in Maharashtra. Going forward, IIFL Foundation will continue to undertake relief measures and support the underprivileged sections of the society in their fight against the pandemic.

IIFL Foundation is the CSR arm of diversified financial conglomerate IIFL Group, which runs one of India’s largest girl child education programs – ‘Sakhiyon Ki Baadi’ – which has already educated over 36,000 girls in rural districts of Rajasthan.

IIT Delhi to Establish Department of Energy Science and Engineering; New UG Programme ‘B.Tech. in Energy Engineering’ To Be Offered

Advisor Bhatnagar reviews progress on implementation of NEP-2020 in…