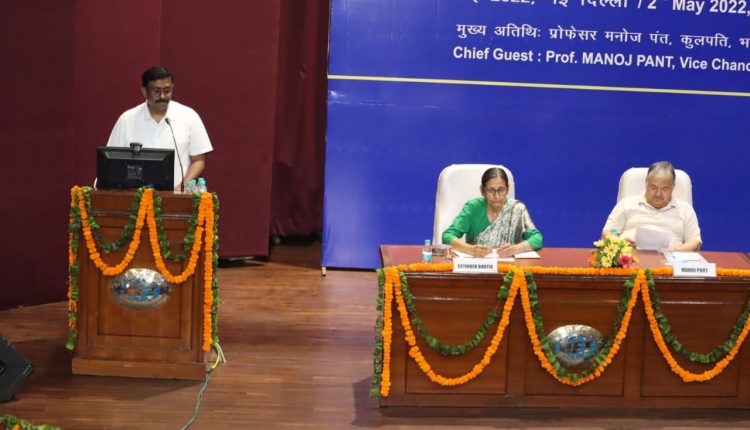 New Delhi: IIFT celebrated its 59th Foundation Day on 2nd May, 2022. Having entered in the Diamond Jubilee year, Prof. Manoj Pant, Vice Chancellor, IIFT, unveiled the Diamond Jubilee Logo of the Institute and paid rich tributes to Late Shri H.D. Shourie, Founder Director General of IIFT. Prof. Pant, highlighted the development of IIFT as a center of excellence in the field of international commerce and business for the past six decades. He said “With a modest beginning as a facilitator for external trade in 1963, it has emerged as one of the pioneering Institutes in the Asia Pacific, playing the role of a leading B School in the subcontinent besides being a Think Tank Organization for foreign trade and policy matters and also a hub for research and knowledge dissemination. The emergence of new campuses/centres, higher rankings of IIFT including the recent AACSB Accreditation place IIFT at a unique position amongst top B-schools of the country”.
While delivering the welcome address Dr. P.K. Gupta, Registrar, recognized the contribution of Institute’s former and present employees and stated “IIFT’s success story would not have been possible without the unrelenting efforts of all its present and former faculty, employees and alumni, who were involved in different capacities and worked tirelessly to make it one of the best institutions in the country”.
In her address, Prof. Satinder Bhatia, Dean, IIFT emphasized upon the key role played by the Institute said “Institute has carved a niche for itself as a catalyst for new ideas, concepts and skills for the internationalization of the Indian economy. It works as a primary provider of training and research-based consultancy in the areas of international business, both for the corporate sector, Government and student community”.
The faculty members, staff, former employees graced the ceremony followed by cultural programmes were performed by the Ganesha Natyalaya. The staff of the IIFT Kolkata Campus participated in virtual mode.