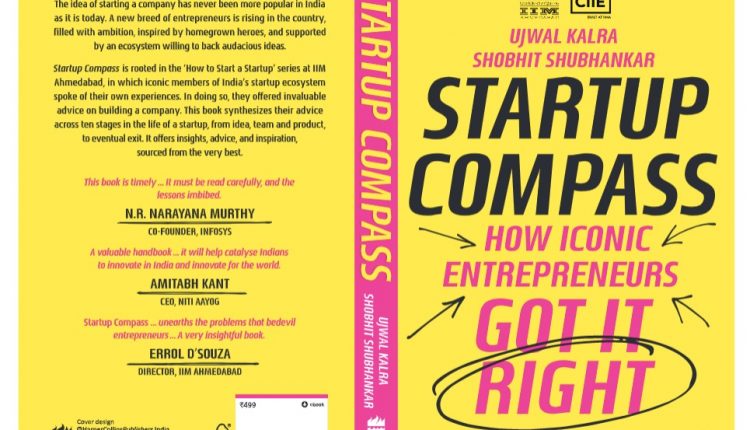 Ahmedabad: CIIE CO, today announces the launch of the “Startup Compass” penned by IIM Ahmedabad Alumni Ujwal Kalra, Shobhit Shubhankar. The book brings forth advice and stories of grit and ambition of the homegrown heroes and how they have transformed their vision into tangible reality. The book has also been forwarded by N. R. Narayana Murthy, Co-Founder, Infosys and has been praised by Amitabh Kant, CEO, NITI Aayog along with Errol D’Souza, Director, IIM Ahmedabad.

Startup Compass is based on the ‘How to Start a Startup’ series at IIM Ahmedabad and includes extensive interviews by ﬁfteen iconic Indian entrepreneurs, where they speak of their success and failure across key stages of the startup lifecycle. The lecture series at IIM Ahmedabad include leading entrepreneurs such as Sanjeev Bikhchandani (Naukri), Deep Kalra (MakeMyTrip), Sachin Bansal (Flipkart), Falguni Nayar (Nykaa), Kunal Shah (CRED), Sahil Barua (Delhivery), Raghunandan G. (TaxiForSure), among others. The topics covered include planning a startup, developing an idea, forming a team, building a product, raising funding and, importantly, moving from an entrepreneurial mindset to a managerial mindset as you scale up your company. The advice they give is invaluable, and covers all the stages in the life of a start-up, from idea, team and product, to eventual exit.

Commenting on the book launch, Ujwal Kalra said, “Today, India is at the cusp of a startup revolution which will transform the country into an economic powerhouse. Startup Compass is a book to ignite the startup explosion in India. It is for anyone who is interested in or intrigued by the startup space. The book provides tangible learnings from fifteen icons of the startup space across each stage in the journey of a startup, from the inception of an idea,to team and product building, fundraising, to exit. The founders and investors interviewed for the book share their learnings in company building through motivational stories, which have immensely influenced me and inspired me in my own entrepreneurial journey.”

The book is powered by CIIE CO, the incubator and accelerator of IIM A, that is focused on supporting Entrepreneurs and startups working on emerging deep technologies such as IoT, robotics, AI-ML, blockchain and others to bring technological inclusion for the masses of India.

Kunal Upadhaya, Co-Founder at CIIE.CO said “Startup Compass is complete with stories of grit and ambition from fearless founders. Much like the vision of entrepreneurs being transformed into tangible reality, the book brings alive the essence of the ‘How To Start A Startup,’ the lecture series at IIM Ahmedabad created in partnership between founders and CIIE.CO.”

Ujwal Kalra is a serial entrepreneur, currently serving as the co-founder and CEO of NAKAD, a supply chain startup that makes credit and commerce easily available to small and medium businesses. Earlier he worked at Boston Consulting Group where he was a founding member of Growth Tech India, a BCG initiative to work with startups. At IIM Ahmedabad, Ujwal co-founded and headed the ‘How to Start a Startup’ series on which this book is based. He was an Institute Merit scholar at IIMA, graduating in the top 5 per cent of his batch. An alumnus of IIT Guwahati and DPS Vasant Kunj, Ujwal has been awarded numerous awards in his young career, including The Economic Times Young Leader, O.P. Jindal Scholarship, Dun & Bradstreet Award and Dunia Scholarship, UAE. He also represented India at Kairos, a USA-based entrepreneurship society.

Shobhit Shubhankar is a consultant at Boston Consulting Group. He has worked across South-East Asia with project experience in private equity, technology, telecommunications, and industrial goods practice areas. He has also worked at B Capital Group, a multi-stage global investment firm investing in technology companies. He is an alumnus of IIM Ahmedabad where he was a founding member of the ‘How to Start a Startup’ series, and graduated in the top 5 per cent of his batch. He has a bachelor’s degree in chemical engineering from IIT BHU Varanasi, and serves on the board of the IIT BHU Global Alumni Association.