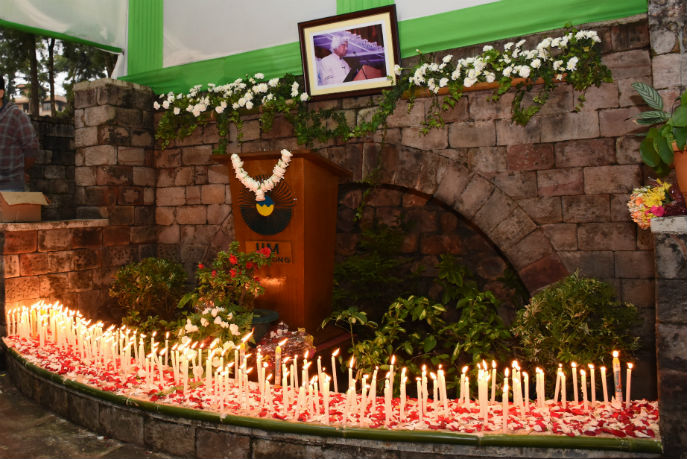 Shillong : The IIM Shillong fraternity marked the second Death Anniversary of the ‘People’s President’ with the 2017 edition of the Dr. A. P. J. Abdul Kalam Annual Lecture Series. Padma Vibhushan Shri G. Madhavan Nair, former Chairman, Indian Space Research Organisation and Secretary to the Department of Space, Government of India was the Chief Guest for the session.

Instituted in 2016, the Annual Lecture Series was conceived to honor the legacy of the late former President. Launched in conjunction with a host of other initiatives, it aims to provide a platform for distinguished luminaries to share their perspective on building ‘a better planet’ in keeping with Dr. Kalam’s vision for societal development.

Initiating the proceedings of the second edition was Flautist and composer, Mr. Benedict Hynniewta, who opened the event with a heartfelt rendition as a tribute to the Missile Man of India.

Dr. Amitabha De, Director, IIM Shillong, then opened his speech on a congratulatory note, lauding the students of IIM Shillong for making Nurturing Minds a stupendous success. Envisaged as a learning driven initiative in 2015, Nurturing Minds serves as a knowledge transfer platform to mentor local students from in and around Shillong.

“Dr. Kalam believed in working sincerely and tirelessly for the betterment of the nation”, he observed. Dr. De also talked about partnering with the Ministry of Development of North Eastern Region (DoNER), the North Eastern Council (NEC), and various State Governments in the region for setting up the Dr. Abdul Kalam Centre for Policy Research and Analysis. The Centre will be housed in the institute, and will work towards designing developmental models for tourism, business process outsourcing, logistics, handicraft, handloom, and horticulture in the region.

Dr. De also announced that the new Institute campus will house a 2000 square meter auditorium that will be named after the former President.

Dr. Rohit Dwivedi, Chairperson – PGPEx, who took to the Podium after the Director’s address, highlighted Dr. Kalam’s exemplary institutional building capabilities which had put ISRO on the same pedestal as other premier space research agencies like NASA. “While we are sad that he is not with us, we choose not to mourn, but to celebrate his legend by honoring his vision of igniting minds”, he said.

Dr. Nair, the Chief Guest for the event, then delivered his address on the theme “Space and Society: the Indian scenario”. He spoke at length about the history of human space endeavor, and about its progression from the days of 12-inch rockets to the technological marvels of the day. He took the attendees through ISRO’s developmental journey from infancy to modern day glory.

Recalling Dr. Kalam’s contribution to the nation, he underscored how the former DRDO Chief who later became President adopted a different approach towards work, and towards fulfilling his commitment to the society. Harkening back to the days when the two worked together, Dr. Nair talked about the former President’s exemplary leadership qualities, and his sense of ownership. “It is the dream that comes to you while you are awake that is important”, he said, while reminiscing about Dr. Kalam’s religious commitment to his work.

Dr. Nair’s speech was followed by an interactive Q&A session, where he took questions from the audience. Addressing a wide array of queries with élan, Dr. Nair peppered his answers with anecdotes from his professional journey.

The Q&A session was followed by the Prize Distribution ceremony, where the winners of Essay and Painting competitions held by IIM Shillong were felicitated. Mr. Issac Wahlang of Meghalaya Police Public School bagged the first prize for essay writing in the Group A category, while Mr. Aushinar Dastidar of BSF Senior Secondary School secured the first position in the Group B category. Ms. Shayani Karamji of Army Public School and Ms. Koyel Kalita of St. Mary’s Higher Secondary School won awards for the painting competition in Group A and Group B categories respectively.

The event concluded with a vote of thanks from Dr. Basav Roychaudhury, Chairperson – PGP, IIM Shillong, who thanked Dr. Nair for his edifying address. Acknowledging the healthy participation across all competitions organized by the institute, he thanked institute administrations for their cooperation. Alluding to the success of Nurturing Minds, he also thanked faculty members and students for their continued support. He also expressed his gratitude towards the Government of Meghalaya for stellar logistical and security arrangements.
He closed his address with an open invitation to a candle light vigil to be facilitated by IIM Shillong in memory of Dr. Kalam.

Internshala opens up college registration feature for the benefit of students