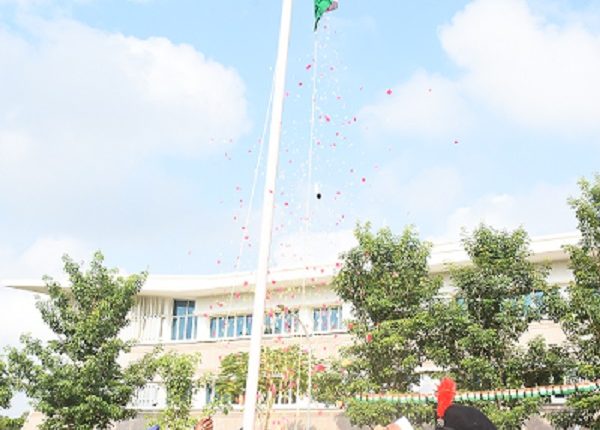 Trichy: Indian Institute of Management Tiruchirappalli (IIM Trichy) celebrated the 73rd Republic Day on 26th January 2022. The event was attended by the students and members of the IIM Trichy fraternity present on the campus following social distancing norms. The event was also telecasted live. The event commenced with the unfurling of the National Flag at 9:00 am by Dr. Pawan Kumar Singh, Director IIM Trichy, followed by the National Anthem and a march-past by the campus security guards.
The Republic Day address was delivered by Dr. Pawan Kumar Singh. He began his speech by highlighting the meaning of independence and self-governance. He expressed his heartfelt gratitude towards the makers of our Constitution, especially Dr. Rajendra Prasad, the President of the Constituent Assembly and the first President of India, and Dr. B. R. Ambedkar, the Chairman of the Drafting Committee. Touching upon our rich cultural heritage, he mentioned how India had been the first in the world in multiple aspects such as literature and science. Due to the sheer age of our heritage and history, Indian wisdom, by default, becomes world wisdom. He added that while it is important to cherish our golden past, we should stay alert and strive to bring progress and development to the nation.
After the director’s address, prizes were distributed to the winners of various competitions conducted as part of the Vigilance Awareness Week which was observed from 26th October to 1st November 2021. Awards and certificates were distributed to Security, Housekeeping, and Gardening Staff for their meritorious contributions.
The students, faculty, staff and their family members gave performances such as singing, dancing, Silambam, and Yoga as part of the Republic day celebrations. The event concluded with the distribution of light refreshments for the attendees.