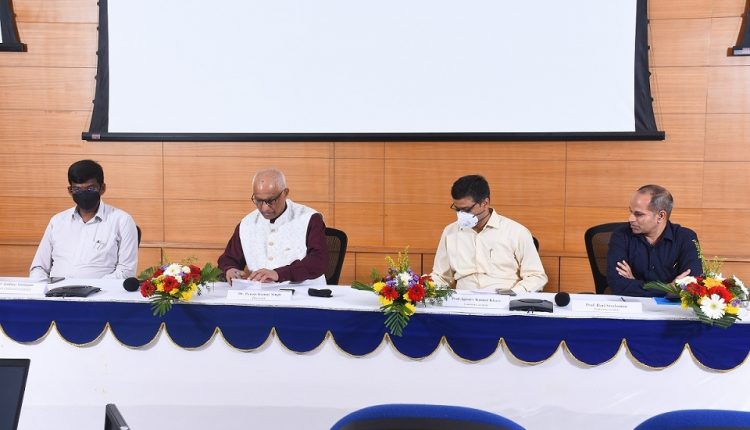 Tiruchirappalli : IIM Tiruchirappalli conducted the International Conference of Markets and Development, the 16th Biennial Conference of ISMD, the International Society of Markets and Development from 16 December to 18 December 2021. The 3-day virtual conference featured 6-panel discussions with 32 participants from around the globe engaging in discussions about multiple topics such as informal markets, marketization, and hierarchies of knowledge. The Conference featured delegates and panelists from Schulich School of Business, York University, Birmingham Business School, Royal Holloway University of London, University of Texas Rio Grande Valley, Loyola University Chicago, University of Glasgow, RMIT University, Australia, University of Helsinki, IIM Calcutta, IIM Indore, and many other prominent institutions.

The inaugural ceremony held on the 16th of December began with the lighting of the lamp by faculty members from IIM Trichy including Director Prof. Pawan Kumar Singh, Dean Administration, Prof. Godwin Tennyson, and the conference chairs, Prof. Apoorv Khare and Prof. Hari Sreekumar from the marketing area.

This was followed by an address by Prof. Hari Sreekumar introducing the Conference, and highlighting the key themes of the Conference. This was followed by a welcome speech by the Director Prof. Pawan Kumar Singh. He emphasized how the conference is set to enrich student understanding by exploring the domain of marketing in terms of both positive and normative economics and focusing on marketing that helps the overall well-being of customers.

The keynote address of the conference was held the following day with the keynote speaker Prof. Fuat Firat. He began the address by reminiscing on the first ISMD conference held in 1986 in Istanbul, Turkey, recalling all the members and different ISMD presidents. Calling the present time “the era of normalization of the absurd,” he remarked that what would have been yesterday’s parody is today’s normal. He went on to speak about the erosion of democracy and the global domination of neoliberal ideologies where the economic interests of the powerful have supplanted the interests of democracy. Noting that democracy has been sold out to corporations in first-world countries, he argued that democracy was always a project in the process of completion but never completed. He urged the audience to consider the current state of wealth inequality and pollution, its overarching effect on society, and what academics can do to subvert this crisis. He then spoke about the general disbelief in science amongst people and how new technologies have created environments not conducive for deep analysis and reflection on the information received. He noted how people customizing and choosing to only receive information on topics of their interest has caused a loss of general knowledge about the affairs of the world. He emphasized that if all information is stored on technology and not in human memory it can’t be reflected upon, which leads to populations being unaware of what affects them and becoming easy to manipulate. Concluding the address, he articulated how marketers need to provide the right insights to humanity to stop the normalization of absurdity.

The closing ceremony held on 18th December commenced with Prof. Hari Sreekumar announcing the winner of the Best Paper Award for ICMD 2021 – Dr. Chloe Preece for her paper titled “Choose your Own Future – The Sociotechnical Imaginaries of Virtual Reality”.

Founding Co-Editor of the Journal, Dr. Deniz Atik, thanked everyone on behalf of her co-editor Dr. Nikhilesh Dholakia for supporting the journal throughout its existence. Further, Prof. Fuat Firat, on behalf of the ISMD Board, announced the publication of a series of articles to honor the stellar work done by the editors of the journal.

Co-chair of ISMD Conference 2021, Prof.Apoorv Khare proposed the vote of thanks.

In this regard, please find attached the press release and photos. We request you to include it in the upcoming edition of your esteemed news media.