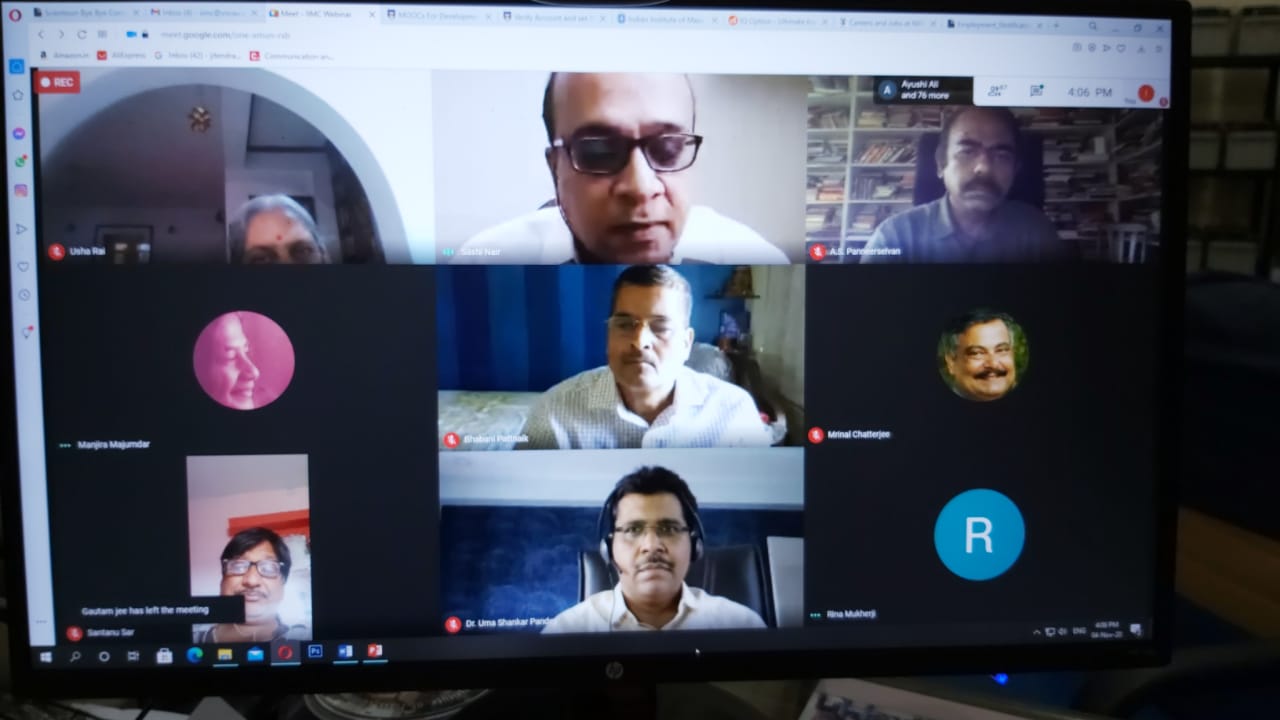 Dhenkanal: Media has influence. Whether it is in the direction of social reform or policy-making, it is the media that plays the key role in giving the right direction. However, it seems that media is suffering a trust deficit. This needs to be addressed to revive the credibility quotient of media.
Academia and media industry experts highlighted such issues during an e-panel discussion commemorating legendary editor Sir Harold Evans at the Eastern Regional campus of the Indian Institute of Mass Communication (IIMC), Dhenkanal on Wednesday, 4 November 2020 in collaboration with the Press Institute of India (PII), Chennai.

“Harold Evans is one of the best journalists in terms of practicality. Prioritizing the reality of the situation, he focused on writing news and editorials,” said A.S Panneerselvan, Readers’ editor, The Hindu. In recent years, the environment of the newsroom has changed. In the past, journalists have been in talks with experts in the newsroom when covering news or events. This maintained the importance and quality of the news. But nowadays, journalists are reporting only on the advice of external experts. They get the information from them and publish without reporting the facts. In addition, one of the main problems is deadline. Many media outlets are focusing on making more news in less time. The impact is also on the quality of the news. As a result, journalists are less likely to pay attention to the news, its scope and its perspective. One of the problems is that young journalists are now focusing on multi-tasking. This makes it impossible for a journalist to focus accurately on the news. Some media outlets are focusing on reporting quickly rather than flawlessly. In this way, real journalism can never be revived, he added.

Joining him as one of the speakers, senior journalist Usha Rai said, “Journalist Harold Evans has done a lot for the betterment of the larger society.” He has been instrumental in changing the law, including raising his voice against ugly acts, especially in the field of health, such as gender identity. In addition, many social reform news, and editorials were penned down and published various investigative news stories. However, the current media, especially television, is focusing on provocative news rather than investigative news. Besides, he also said, “Young journalists are also not aware of the importance of the news. As a result, they go to the field and ask questions without looking at the place and time. All of this is affecting good journalism. Similarly, the media organization had the intention of broadcasting the news immediately, so there would be no time to gather all the details of the news. Therefore, the news is becoming incomplete.”

Manjira Mazumdar, another senior Kolkata based journalist, said “The nature of the newsroom had changed. In the early years of journalism, journalists often went to the scene and reported the news. But now most are gathering information from external sources and reporting the news. As a result, the news has not been as important. This is because of the fact that today, with the help of social media, readers are becoming more and more familiar with a variety of topics. In such a situation, journalists have to be more vigilant than ever before.”

Media educator Dr. Uma Shankar Pandey cited the example of the Pakistan-Bangladesh partition and discussed how the news of Harold Evans had an impact on all matters at a time. “A lot of news now has to rely on official sources,” he added. In other words, the information is being prepared based on the information that government officials or public relations officials provide to protect the image of their organization. Journalists are covering the news without much contact with the public. This raises questions about the credibility of the media. “Both the media and journalists need to vigilant in this regard.

“Many current journalism students and young journalists may not know who Sir Harold Evans is and what he has really done in the field of journalism,” said Shashi Nair, Director of the Press Institute of India (PII) Chennai. But, it is worth noting that he worked hard in journalism. He has been an example in writing investigative reports. The impact of his news is considerable. Sadly, the problems of grassroots people, investigative reporting, etc. are declining in the current media. As a result, the credibility of the media is in jeopardy. To get out of this problem, we have to revive everything and move forward, Nair added.
Professor Mrinal Chatterjee, Regional Director, IIMC Dhenkanal said “Journalism is under pressure right now. Journalism is now losing credibility due to both internal and external pressures. In such a situation, there are two options for journalism. Simply, leaving journalism to die hard or trying to revive real journalism. Of these two, one must consider the second option. The contribution of journalism to the individual, to society, to civilization has always been great.”

Sir Harold Evans was the editor of the Sunday Times and The Times. A graduate of the University of Durham, he wrote best-selling histories. He is the recipient of the British Press Awards’ Gold Award for Life Achievement in Journalism. In 2001 he was chosen by British journalists to be the editor of the All Time Great British newspaper. He was knighted in 2004 for his services to journalism. This muckraker and crusading publisher died in September 2020 at the age of 92.

The session was attended by media industry experts, media academicians, research scholars, faculty of the IIMC, and the students.