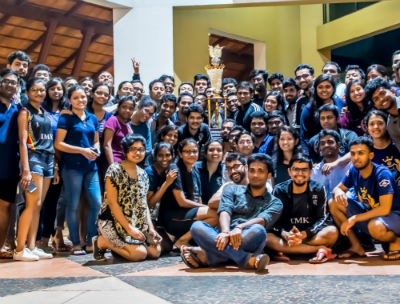 IIMK emerges as a winner at Sangram 2017

The 12th edition of Sangram hosted by IIM Kozhikode proved to be better and bigger than all its previous versions. The festival which commenced on Friday, November 17 saw a plethora of indoor and outdoor sporting competitions. The inaugural ceremony was a gala affair with awe inspiring music and dance performances followed by an enthralling laser show with lights as radiant as the participant’s energies and enthusiasm.

While outdoor games Cricket, Football, Kho-kho, Volleyball, Throwball, Basketball, Tennis, Badminton, Hockey and Swimming gave the contestants a chance to showcase their efforts and continuous sweat-it-outs at the field, indoor games like Chess, Pool and Carom demanded them to wrack their mental faculties in order to enhance their accuracy and ability to strategize.

IIM Kozhikode emerged as a champion during the three day sports fiesta by performing splendidly and by backing 11 gold, 8 silver and 1 bronze medals which was a result of ferocious training and planning.  Other participants from IIM Bangalore won 8 gold, IIM Trichy and IIM Vishakhapatnam won 1 gold medal each respectively.

Rohan Agarwal, the overall Coordinator for Sangram, emphasized on the Sports Committee’s efforts which they had invested over a period of three months, overcoming the forces of nature and a crucial summer placements week. Extending heartfelt gratitude, he thanked the competing teams and the audiences, “It was not the effort of Sports Committee alone but everyone who participated and more importantly who came to cheer across the venues. I would also like to thank the participants from IIM Bangalore, IIM Vishakhapatnam and IIM Trichy for coming and making Sangram such a big success.”

IIM Kozhikode certainly is enjoying the reveries of this impactful achievement. It has successfully ‘Gone the Distance’ and now waits for Sangram 2018 with new found confidence to repeat this winning feat.