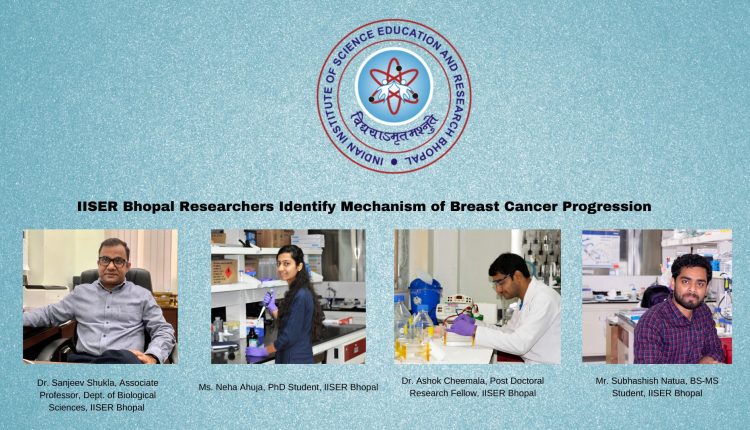 Bhopal: Indian Institute of Science Education and Research (IISER) Bhopal Researchers have shown the mechanism by which breast cancer cells proliferate and spread. Their findings have important implications in designing therapeutic interventions for breast cancer.

Highlighting the practical applications of this research, Dr. Sanjeev Shukla, Associate Professor, Department of Biological Sciences, IISER Bhopal, said, “Our research, for the first time, shows the reason behind an elevated expression of a key gene, ESRP1, in breast tumor tissue supporting tumor progression. Another important part of the discovery was a novel epigenetic regulatory mechanism that governs ESRP1 downregulation in hypoxic tumor tissue, which might help the cancer cells to evade the surrounding tissue and enter the bloodstream. Our research further suggests that E2F1 could be a molecular drug target to inhibit the growth of both normoxic as well as hypoxic breast cancer cells.”

Further, elaborating on how this research will impact breast cancer treatment, Dr. Sanjeev Shukla said, “The finding that such intelligent regulatory mechanisms exist in cancer cells to alter the expression of essential genes as and when required, resulting into cancer progression, lays the foundation towards a better understanding of a complex disease and for improved therapeutic strategies.”

CareerLabs Partners with Dr. Reddy’s for their New…

In India, breast cancer accounted for 11.1 percent of cancer deaths in 2020, resulting in the need for aggressive research into understanding and treating this malady. In cancers, it is known that some genes are activated or ‘upregulated,’ resulting in abnormal growth and proliferation of diseased cells. Cancer Epigenetics – the study of changes in gene expression that are associated with cancer – has thus assumed centre-stage in the area of cancer research in recent decades.

Another interesting finding by the research team was on the mechanistic aspects of cancer spread to other parts of the body or metastasis. Cancerous tumours develop regions of reduced oxygen due to poor blood circulation.

It has been known that such oxygen-deprived regions instigate metastasis. The IISER researchers have unraveled the mechanism behind this; they have shown that E2F1 fails to bind the ESRP1 promoter in oxygen-deprived breast cancer cells, thereby downregulating the expression of ESRP1. This downregulation causes the cancerous cells to break free from primary cancer and join the bloodstream to be carried to other parts of the body, thereby resulting in metastasis.

“Our research shows that there is orchestrated activation of ESRP1 in breast cancer, depending on the tumour microenvironment,” added Dr. Sanjeev Shukla.

Under regular oxygen conditions, cancer cells upregulate ESRP1 to help them multiply in the primary cancerous zone, but under oxygen deficiency, ESRP1 is downregulated, leading to the break-up of the cancer cells from the primary region and spread to other parts of the body. Understanding this orchestration of ESRP1 by breast cancer cells can help in devising strategic therapeutic interventions, which the IISER team continues to work towards.

CareerLabs Partners with Dr. Reddy’s for their New Chemical Engineering…