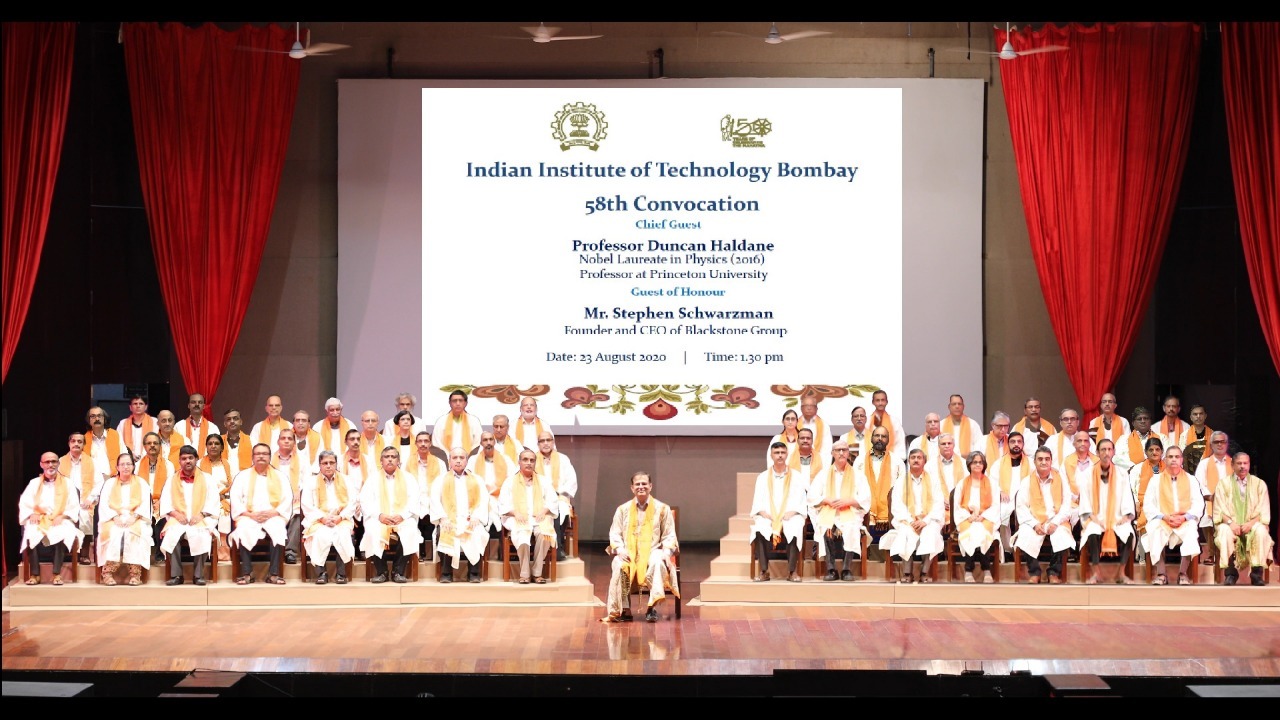 Mumbai: The 58th convocation of IIT Bombay was held today (August 23, 2020) from 1.30 pm onwards in Virtual Reality mode, keeping in view the safety measures during the ongoing pandemic. The Institute thought it best to arrange such a VR-convocation for the graduating students so as not to put their health at risk but at the same time, not deprive them of the sense of achievement and pride of passing out of India’s premier engineering Institute. The personalized avatar of each graduate received the degree certificate from the personalized avatar of the Director Prof. Subhasis Chaudhuri. All medal winners received their medals from the personalized avatar of the Chief Guest. The entire event was telecast on DD India and DD Sahyadri channels as well as YouTube and Facebook live.

Prof. Duncan Haldane, co-recipient of the 2016 Nobel Prize in Physics, and a Professor of Physics at Princeton University, was the Chief Guest during the ceremony. Mr. Stephen Schwarzman, Chairman, CEO and Co-Founder of Blackstone, world- renowned investor and philanthropist was the Guest of Honor.

Presenting the Institute’s Report for the year 2019-2020, Prof. Subhasis Chaudhuri, Director of IIT Bombay informed that IIT Bombay continues to be a much sought-after destination for UG and PG studies. Speaking on the occasion, the Director said, “Producing top quality graduates who would be future leaders in industry, research and academia is the primary goal of IIT Bombay. The skill they developed, the work culture they picked up and the peers they made during their studies at IIT Bombay will help them achieve success in their lives. The entire nation will be looking forward to their contributions in taking our country ahead”. He further said, “Providing a virtual reality experience to all our graduates needed not only highly innovative steps but also a tremendous effort by our professors and staff. They did it for the students. Hopefully this will enthuse our graduates as well as other engineers in the country to think big and think innovatively”.

Chief Guest Prof. Haldane said, “There is a lesson for everyone involved in research. Even if you are involved in a very goal-driven project, try to find some small share of your time to investigate unexpected curiosities that sometimes show up along the way. The analogy is that you may be walking along a path kicking a few rocks with your boots, but if you don’t look at your feet, you may miss a huge rough diamond that your kick exposed, and just walk on by. Of course, eventually someone else may walk that path and see the gem that you inadvertently unearthed but failed to notice”.

In his speech, Stephen A. Schwarzman said, “India occupies a unique position in the world today, especially when it comes to technology, where it has established global leadership through its talent. Of the 72 Indian-origin engineers who have founded unicorns across the world, 50 percent are IIT alumni. IIT engineers are defining the global technology landscape and the newest alumni will be the next generation of future global leaders who will advance that mission”. He further said, with a young, ambitious and tech-savvy population, a forward-thinking government that supports entrepreneurship, and the fourth-largest start-up ecosystem in the world, India is poised to stake its claim as one of the world’s great innovation hubs.

The graduating students this year include 381 PhDs, 18 Dual Degree (MTech/ MPhil + PhD) and 27 Dual Degrees (MSc+PhD). Out of these, 39 research scholars were selected for the award of ‘Excellence in PhD Research’ for the year 2018-20. In addition, 33 joint PhD degrees, in association with Monash University, were also conferred by the Vice-Chancellor and President of Monash University Prof. Margaret Gardner, on the occasion.

This year, one PhD degree under joint supervision with Washington University in St. Louis, USA, and two Cotutelle PhD degrees, one each [in MTech+PhD and MSc+PhD programme] in agreement with University of Wollongong, Australia and with Université du Québec à Trois-Rivières in Canada were also awarded.

Prof. Margaret Gardner, President and Vice-Chancellor, Monash University, Australia, members of Board of Governors and several other distinguished guests from India and abroad attended the Convocation function online, besides the graduating students and their proud parents.

Disaster Control Centres should be active round the clock: Madhya Pradesh CM