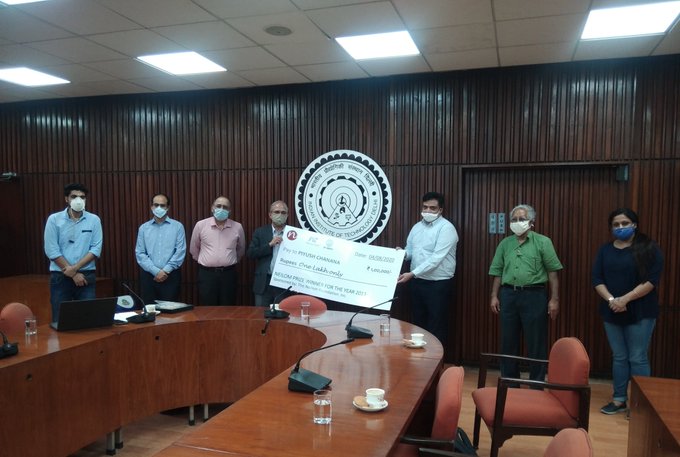 New Delhi: Dr Piyush Chanana, who recently completed his PhD from IIT Delhi, has been awarded Neilom Prize for the year 2019. The award carries a cash prize of Rs 1 Lakh and is given every year to the best outgoing student of IIT Delhi, who has contributed in the space of assistive technology to empower people with disabilities. Prof V. Ramgopal Rao, Director, IIT Delhi gave away the award to Dr Chanana.
The goal of this prize instituted by Neilom Foundation, Maryland, USA is to inspire and empower recipients, who are Neilom Fellows, to become the leaders of tomorrow and create impactful solutions to reach humanity.
The Neilom Foundation was established by Prof. Davinder K. Anand in the honor of his son Dilip “Neil” Anand. The Foundation’s vision is to support activities to improve the lives of young people working at the intersection of Education and Technology.
Dr Piyush Chanana has been a part of the Assistech Lab at IIT Delhi for more than eight years. He worked extensively towards independent mobility solutions for people with visual impairment. He has contributed towards the development of Smartcane, an electronic travel aid for people with blindness and visual impairment. His efforts led to large dissemination of Smartcane among users in India and abroad.
Prof M. Balakrishnan (IIT Delhi) who is one of the founders of the Assistech Lab said that Smartcane is a flagship innovation from the lab, which is licensed to Phoenix Medical Systems, Chennai. The product has now reached over 70,000 users and royalty earned from the product has helped in addressing new unmet needs in the space of assistive technology.
Speaking on the occasion, Prof Anand, the Founder of Neilom Foundation said, “We are very pleased to support the transformative work of the Assistech laboratory at IIT Delhi, and proud of the Neilom Fellows that they select. The technologies they have developed light a beacon of hope for the visually impaired and represent a significant step forward in helping them live a joyful life.”

We will Ensure Access to Education & Learning for 33 Crore Indian Students during the Covid 19 Pandemic: Dr. Ramesh Pokhriyal ‘Nishank’