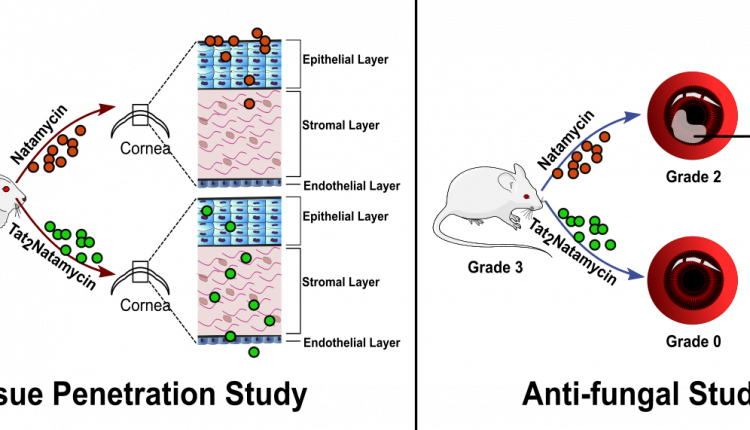 New Delhi: India has a huge agrarian population, which is very prone to vegetative trauma while farming. Vegetative trauma to the eye is generally caused by the infected vegetable matter such as plant leaves and often leads to fungal infection of the cornea in the eyes or fungal keratitis.

Currently available drugs for fungal keratitis are less effective, especially in severe disease due to poor drug penetration, poor bioavailability, and antifungal efficacy. US FDA-approved Natamycin is employed as a primary line of treatment for fungal keratitis but due to poor ocular penetration, it requires prolonged and frequent dosing, causing discomfort to patients.

In an effort to develop a better antifungal strategy for fungal keratitis, an all-women team of IIT Delhi researchers led by Prof. Archana Chugh from Kusuma School of Biological Sciences (along with her PhD students – Dr. Aastha Jain, Harsha Rohira, and Sujithra Shankar) has been working in collaboration with Dr. Sushmita G Shah, Ophthalmologist and Cornea Specialist from Dr. CM Shah Memorial Charitable Trust and Eye Life, Mumbai.

The team has successfully developed a novel peptide-based antifungal strategy for enhanced Natamycin penetration. The developed peptide-drug conjugate showed an appreciable antifungal effect in the lab.

Prof Archana Chugh, Kusuma School of Biological Sciences, IIT Delhi said, “These peptides are known to have the ability to carry molecules with them in the cells. Therefore, when poorly permeable Natamycin was attached to the peptide, the formed complex showed better antifungal effect.”

In their research study, the scientists found that conjugate drug penetration was 5-fold higher than Natamycin in rabbits, thus enabling lowering of the dosage frequency. Further, 44% of mice showed complete resolution of fungal infection with the novel conjugate as compared with 13% of mice that were treated with Natamycin suspension only. The study has been recently published in the International Journal of Pharmaceutics (https://www.sciencedirect.com/science/article/abs/pii/S0378517321002891).

The animal studies were carried out in collaboration with Dr. Shikha Yadav, Head of Animal Facility at the National Institute of Biologicals, NOIDA. The research was initially funded by the Department of Biotechnology followed by Nanomission, Department of Science and Technology, Government of India.

Prof Chugh further said, “This is a great example of “Make in India”; however, a few hurdles persist for us before this novel conjugate can enter the clinics and is useful to patients. With promising results obtained in the animal studies, we are hopeful that the Biotechnology/ Pharmaceutical industry will come forward for its clinical trials.”

Dr. Sushmita G Shah, Ophthalmologist & Cornea Specialist, Eye Life, Mumbai said, “Collaboration between Clinicians and Scientists is important to develop newer and better drugs, diagnostic devices, etc., which can improve patient care. We are very excited with the results obtained so far and look forward to initiating a clinical trial with the participation of the Industry and other relevant agencies.”

While speaking of the research study by the team led by Prof Chugh, Dr. Virender Singh Sangwan, Director Innovations, Dr. Shroff’s Charity Eye Hospital, New Delhi said, “The study clearly demonstrated enhanced penetration and effectiveness of a conjugated form of Natamycin for the treatment of fungal keratitis. In India and most of the developing countries, fungal keratitis is a significant public health problem and is responsible for almost 50% of cases of keratitis. Currently available treatment such as Natamycin has poor penetration of the drug into the cornea and hence results in delayed response to treatment.”