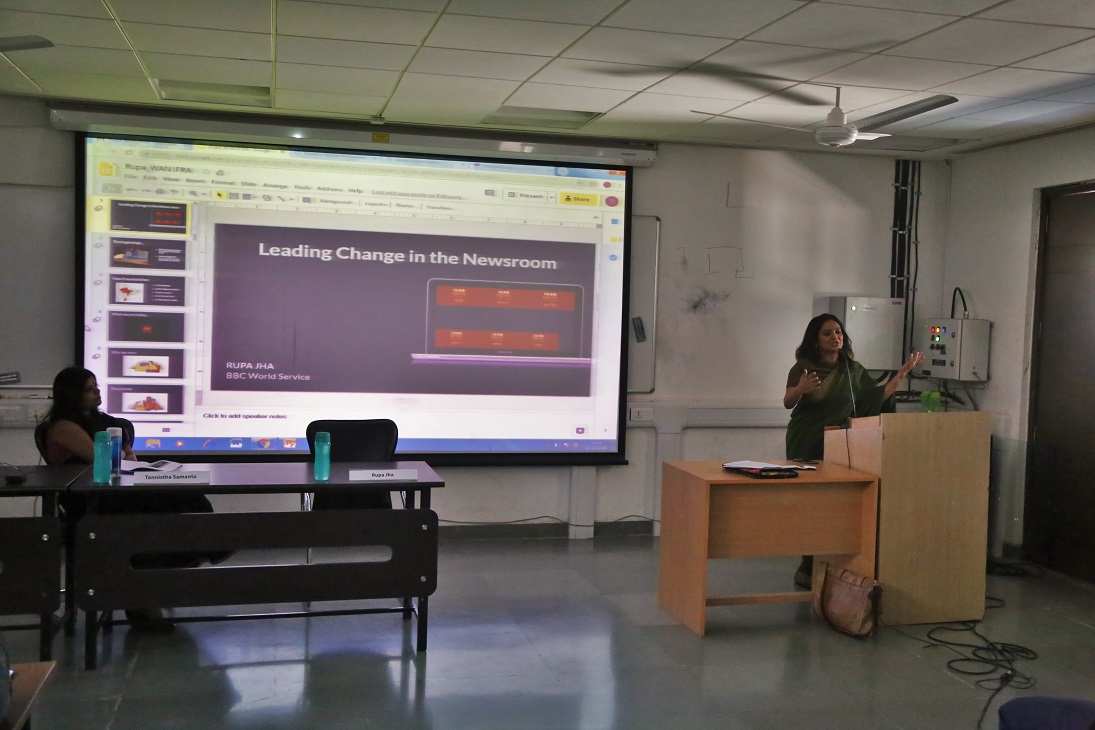 Palaj, Gandhinagar: The discipline of Humanities and Social Sciences at the Indian Institute of Gandhinagar (IITGN) organised panel discussions on the theme of the “Changing Role of Women in the Age of the Digital” on March 12, 2019. The day also marked a retrospective celebration of the International Women’s Day (celebrated worldwide on 8th March) with the reopening of the institute after the mid-semester break. The panels intended to recognize academic and praxis based contributions towards the digital shift, particularly underscoring the role of women in the ‘digital turn of civilizations’.

The first panel, comprising Professor Nirmala Menon from IIT Indore, Professor Madhumita Mazumdar from DAIICT Gandhinagar, and Professor Nishaant Choksi from IIT Gandhinagar, discussed ‘Writing, Research, Aesthetics in the Digital World’. Putting forward her points on ‘Women in/ and Digital Age’, Professor Nirmala Menon emphasized that, “Data discrimination is a real social problem. Popular search engines create advertisement algorithms, instead of information algorithms and majority of people believe it to be relevant content.” She gave examples of paradoxical results of the gender stereotyping on a popular search engine. “Digitalizing the humanities is as important as humanizing the digital. Women have to become active participants to change gender discrimination in the digital world”, She concluded.

The second panel lead by Ms Rupa Jha, Head of Indian Languages for the BBC India, Professor Tannistha Samanta, and Professor Arnapurna Rath from IIT Gandhinagar, focused on various aspects of ‘Gender, Public Opinion, and Digital Journalism’. Sharing her experience of working in the media industry and speaking on ‘Women in News, Leading Change in the Newsroom’, Ms Rupa Jha gave a historical context of BBC’s work practices and how it has evolved now to be a dynamic media entity that is consumed by audience on different digital platforms. She introduced participants to the content strategy of BBC with women-centric content and said that, “It is important to have a human bond with the audience. Trust, audiences, quality, creativity, and respect are the ingredients that build credibility.”

Professor Tannistha Samanta spoke about ‘Digital Slumdog: Internet based leisure at the Margins’. Explaining about internet cultures versus internet-mediated cultures she said, “Internet based social spaces offer opportunities for constructing, experimenting, expressing and articulating aspirations of the youth. But the question is whether it is able to rupture social hierarchies” She further explained that, “Information and Communication Technologies for Development (ICT4D) can empower the poor through digital literacy, skill development and technology use.”

In the end, Professor Arnapurna Rath summarized her reflections on all the panelists’ presentations. She spoke on the troll culture which affects each gender, psychologically and socially. She presented an interesting account of three case studies of women across three timelines from digital and print journalistic practices. Her stories focused on: (a) trolling and its impact through an analysis of the case of language used in YouTube and Twitter; (b) some unknown women faces during the early years of freedom struggle and their intuitive connection to newspapers; (c) a new strong language and thought process emerging in the social network accounts of ‘average homemakers’ living under the diktats of conservative social norms.