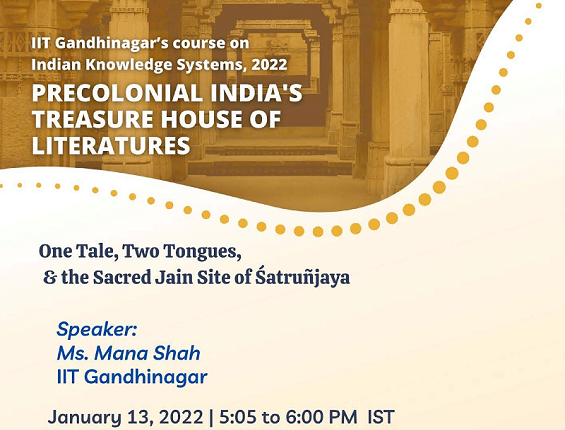 IKS 2022 will be co-taught by about 12 distinguished scholars from India and abroad; interested students can register and attend this elective course from anywhere in the world The first lecture of this edition will be held today on the subject “One Tale, Two Tongues, and the Sacred Jain Site of Shatrunjaya”

Gandhinagar: After five successful seasons, the Humanities and Social Sciences (HSS) discipline of the Indian Institute of Technology Gandhinagar (IITGN) is back with the sixth edition of its unique elective course, Introduction to Indian Knowledge Systems (IKS). The course will be conducted in hybrid mode during January to April 2022, which would enable interested students to register and attend it from anywhere in the world.

The theme of this edition is ‘Precolonial India’s Treasure House of Literatures’. It is centred on the fact that India is renowned the world over for its rich literatures dating back to several millennia. The precolonial India not only had a great diversity of languages, from pan-Indian Sanskrit to hundreds of regional languages, but it also encompasses a plethora of themes, literary techniques, and sociocultural functions. This “literaturescape” deeply impacted the Indian continent at all levels and was highly instrumental in the shaping Indian civilisation.

Elaborating the idea behind IKS 2022’a theme, Prof. Michel Danino, Visiting Professor, HSS, IITGN, said, “Indian literature is colossal. It is one of the vastest literatures of the world, with its epics, texts of philosophy and spirituality, dramas, poetical compositions, repositories of stories, folktales, technical texts on medicine, mathematics, astronomy, architecture, governance, and numerous such works in regional languages. It has been a powerful social tool to connect people, share concepts and values, and ultimately a certain worldview. IKS 2022 aims to provide students with some taste of this ocean that reflects India’s identity.”

The first lecture of the course will be delivered today at 5:05 pm, by Ms Mana Shah, Lecturer of Sanskrit at IITGN, on the subject “One Tale, Two Tongues, and the Sacred Jain Site of Shatrunjaya”.

The course is open to students and anyone truly interested in India’s knowledge systems and cultural heritage. They can join the course for free after online registration on the website: https://iks.iitgn.ac.in/theme-2022/. All lectures will be livestreamed on IITGN’s YouTube channel. Starting January 13, 2022, lectures will be held generally on Thursdays and Fridays from 5:05 to 6 pm. The course’s website will carry regular announcements and updates on the speakers and lectures.