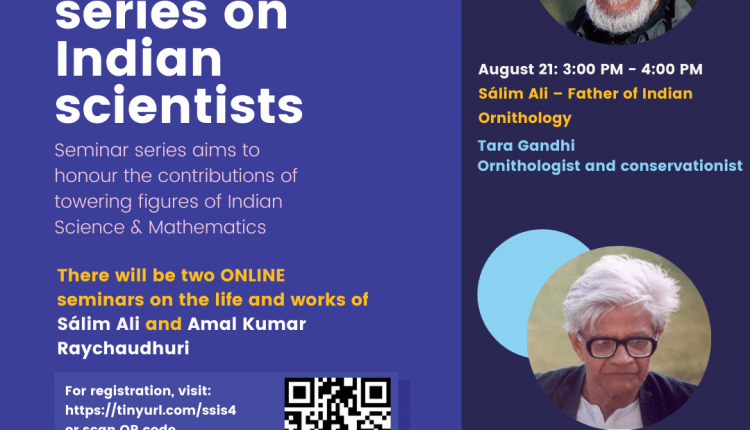 The two online seminars will cover the life and works of Salim Moizuddin Abdul Ali - “India’s Birdman” and Amal Kumar Raychaudhuri - one of the father figures of Indian relativity research after independence The seminars are open for all with free but mandatory registration by August 19, 2021

Gandhinagar: Indian Institute of Technology Gandhinagar (IITGN) is bringing the fourth edition of the Seminar Series on Indian Scientists on August 21, 2021, with two online seminars on the life and works of Salim Moizuddin Abdul Ali and Amal Kumar Raychaudhuri. Both talks will cover a few technical aspects as well as deal with the historical and social contexts in which those pioneers worked, to appeal to faculty and students across a wide range of disciplines.

Tara Gandhi, a noted Ornithologist and Conservationist will deliver the first seminar “Sálim Ali – Father of Indian Ornithology”. This talk will highlight how Salim Moizuddin Abdul Ali, popularly known as Salim Ali or “India’s Birdman”, made significant contributions to the advancement of conservation biology in India, a science that was virtually unknown in the country at that time. He brought into focus the need for interdisciplinary studies of natural ecosystems and birds, encompassing botany, entomology (scientific study of insects), economics, biogeography as well as behavioural sciences and ethology. This talk will also trace his life and times as a pioneering scientist, a Padma Vibhushan awardee, who could engage with people from all walks of life.

The second seminar, “Raychaudhuri and His Equation”, will be delivered by Prof Sudipta Sarkar, from IITGN. This lecture will introduce the audience to the path-breaking research of Indian scientist – Amal Kumar Raychaudhuri in general relativity and cosmology. His most significant contribution is the eponymous Raychaudhuri equation which demonstrates that singularities inevitably arise in the beginning of the universe or at the center of a black hole. Along with V V Narlikar and P C Vaidya, Prof Raychaudhuri was one of the father figures of Indian relativity research.

The late 19th century and the first half of the 20th century witnessed a great renaissance of modern scientific thinking in India. The father figures of modern Indian science from this era contributed significantly to contemporary scientific advances. Simultaneously, they also motivated and led the national movement to create scientific institutions in India.

The Seminar Series on Indian Scientists was launched by IITGN in 2019 to honour the contributions of such often half-forgotten pioneers and towering figures of Indian Science and Mathematics. Each seminar in the series brings a mix of speakers from within and outside IITGN.