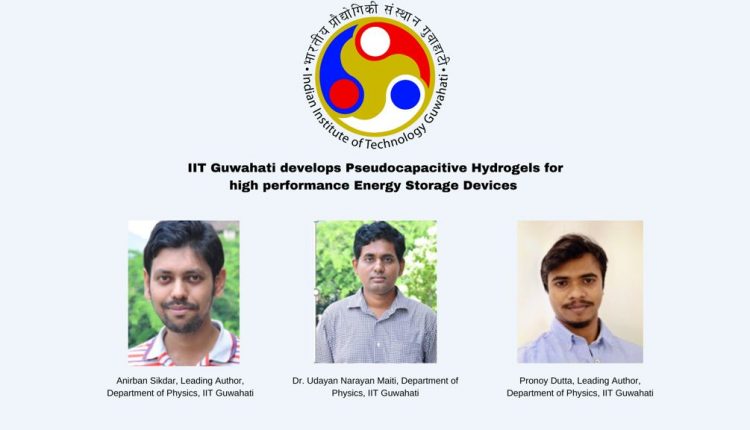 Guwahati: A group of researchers from Indian Institute of Technology Guwahati have successfully developed hydrogel-based electrodes that could enhance the performance of an energy storage device.

A hydrogel is a porous framework of interconnected materials, in which water remains stably locked within the pores. As a building block of the hydrogel, they have chosen two different kinds of nanosheets, namely graphene and MXene, which store charge via two different mechanisms.

Highlighting the unique aspects of the research, Dr. Uday Narayan Maiti, Department of Physics, IIT Guwahati, “Most important aspect of this development lies in its extreme simplicity, scalability and mainly room temperature process which prevents the temperature sensitive MXene from changing its conducting property which ensures high device performance”

He further added, “The entire process of hydrogel development is like constructing a large building with bricks as building blocks. However, development of hydrogels for energy storage using nanosheets require multi-level tuning starting from electronic properties, surface chemical properties and mutual interactions. In our hydrogel structure large graphene sheets provide mechanical stability to the hydrogels, whereas synergistic electronic properties of graphene and MXene give excellent energy storage performance. We believe this development can serve as a platform for further exploration in the area of energy storage devices and beyond.”

In Supercapacitors two electrodes (anode and cathode), made of suitable materials, are immersed within electrolyte solution, and energy is stored by charge accumulation on the electrode surfaces. Atomic-thin sheet-like materials, known as nanosheets, are considered as the best choice for supercapacitor electrode as they can offer a large area to store charge. However, integrating microscopic ultra-small nanosheets into usable macroscopic scales is highly challenging.

They have developed the hydrogels electrodes by simple room temperature process in which graphene and MXene spontaneously assemble themselves over metal plates within a water medium. This unique structure can avoid the restacking challenge associated with charge-storing nanosheets. Graphene, a single atom thin carbon sheet, stores charge on its surface via physical adsorption, known as electrical double layer mechanism (EDLC). Whereas, MXene, nanosheets of titanium carbide, stores charge via both EDLC and chemical reaction on its surface, known as pseudo-capacitance

Researchers at IIT Guwahati showed that their supercapacitors based on MXene-graphene hydrogels can be repeatedly charged and discharged for over 10000 times, with only minimal performance degradation. Such durability is much better than the conventional batteries that typically wear out within 300-500 charging-discharging cycles. The supercapacitor devices developed in the lab can be charged in seconds to their full capacity. It can store energy as high as 30 Wh per kilogram of the materials, which is one of the best values reported to date in MXene based systems. Importantly, these supercapacitors can deliver the energy at a very fast rate when required, which is presented in terms of power density. They have achieved a highest power density of 1.13 kW per kg of electrode material which is almost twice the power offered by current Li-ion batteries. Their hydrogel devices can be engineered to be compact enough to fit the extreme tight spaces of modern portable electronics, which is gaining increasing popularity among the masses.

The results of these breakthrough work in MXene based supercapacitor technologies were published in “Electrochimica Acta” and “Carbon” recently.

Wonderla Kochi is all set to reopen from 1st September