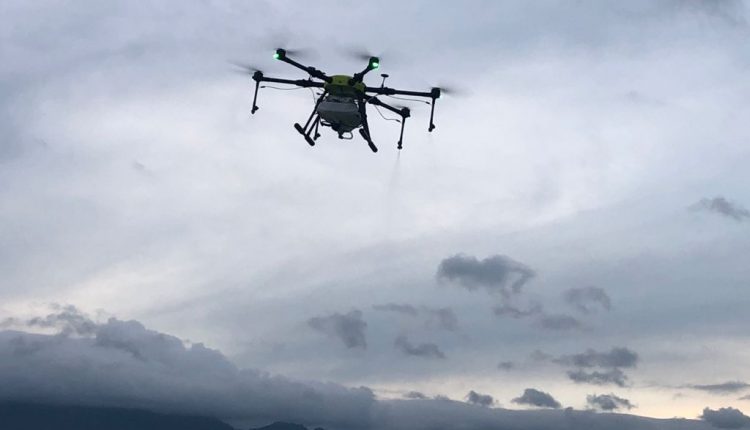 GUWAHATI : Drones developed by Indian Institute of Technology Guwahati start-up, Drones Tech Lab will be performing a drone show at the Republic-Day event in Kamrup, the first of its kind in the north-east region.

The drones developed by IIT Guwahati start-up Drones Tech Lab have been successfully providing solutions in serval domains such as disaster management, agriculture, survey, and mapping.

Drones Tech Lab, one of the start-ups at IIT Guwahati Research Park has been at the forefront, technologically and creatively, in promoting disaster management caused by Cyclone Amphan by offering drone technology to aid frontline workers.

Over the years, these drones have been notable for being instrumental in handling some main challenges in the North East and Eastern parts of India. First, Majuli has the issue of incessant flooding, which not only leads to loss of lives and properties but also erodes a significant part of the island. Secondly, the Kolkata Municipal Corporation faces dengue challenges every year, which results in the loss of lives as well.

To solve these problems, a drone-based mapping solution integrated with post-process kinematics was deployed to aid absolute accuracy and remove the need for GCPs (Ground Control Points) for absolute precision. With this drone solution, along with mapping payload and GIS (Geographical Information System) software, they covered 5 – 6 sq. km in one day compared to 1 – 1.5 sq. km if they had used traditional methods. Also, they deployed a combination of mapping drone and heavy payload drone solutions capable of spraying 10 – 16 liters of liquid over 6 – 7 acres of area uniformly within 9 – 10 minutes.

Speaking about the participation of IIT Guwahati start-up Drones Tech Lab, Prof. TG Sitharam, Director, IIT Guwahati mentioned that since the inauguration of the Drone Centre at IIT Guwahati, there have been several projects where the use of drones is sought for faster data collection, whether it is a land survey, river mapping, agriculture, and healthcare and disaster management. IIT Guwahati will maximize its efforts to provide drone-based services to the state and the region considering the difficult terrain. The present drone show at the R-day event will help in publicising this technology for the benefit of the masses.

Mr. Biswajit Dey, Drones Tech Labs, mentioned that he and his team were feeling elated to be part of the Research Park at IIT Guwahati which has facilitated its participation R-day drone show event and other projects with the district authorities. We would like to provide drone services to the region with all the expertise available with us and expand our reach to all possible sectors. This will greatly benefit the population in enhancing various services in shorter time with higher efficiency.

Extending their solution portfolio to the domain of Survey and Mapping, Drones Tech Lab has catered to different markets encompassing several Indian States which includes Karnataka , Jharkhand, West Bengal, Assam, Meghalaya to name a few. The Survey and Mapping conducted finds applications in various domains which range from mining activities, wherein using drones the exact volume of mine can be assessed with absolute accuracy. Apart from that, one aspect wherein Drones Tech Lab has revolutionized the Survey industry is using their solutions to do various land surveys for different departments.

Drones Tech Lab, has, by using drones as a platform has designed solutions which finds many useful applications in the field of agriculture which is of immense importance as far as eradicating the pest issue at the ground level is concerned. Their drone based solution can identify and indemnify different pests at a pace of one hectare/4 hours using their custom build solutions which involves drone platform, multiple band sensors and AI based application tools. The concerned area of pestation is then sprayed with necessary fertilizers, again with their specially designed UAV/Drones for the North East Terrains, spraying only at the area of pestation, thereby eliminating pests entirely, with safety of crops and humans intact!