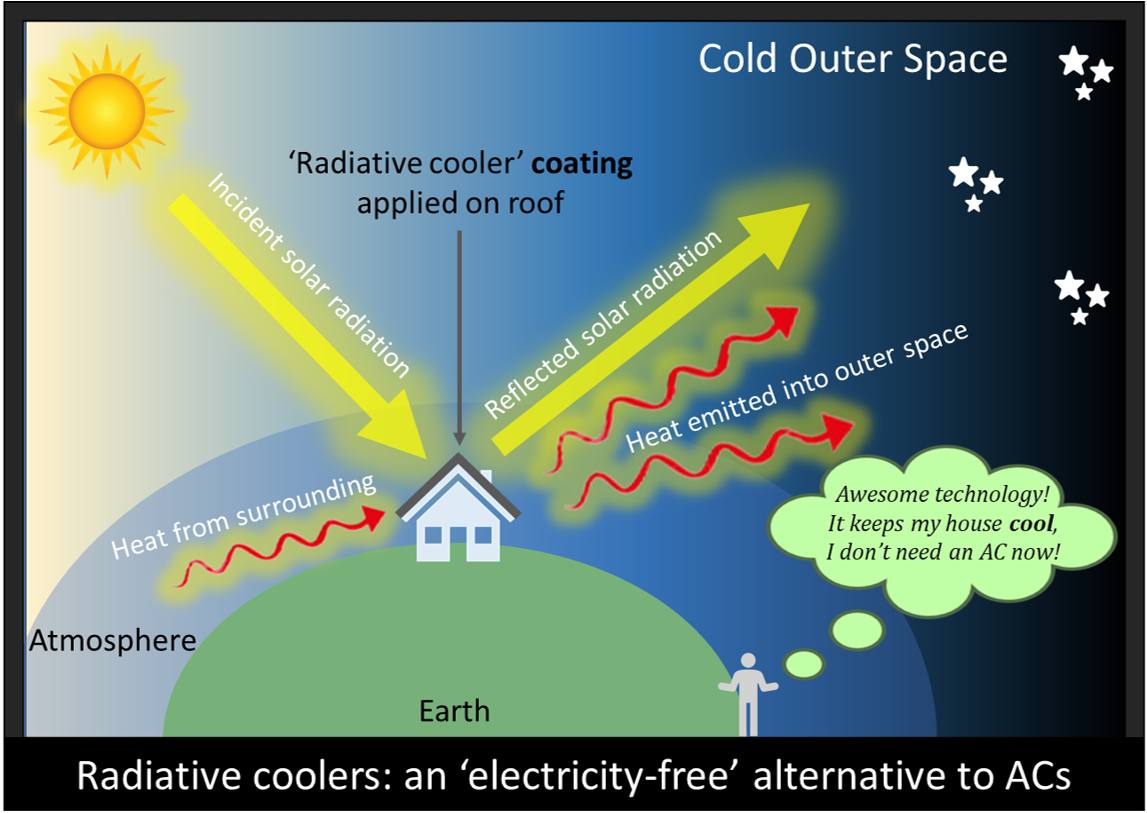 GUWAHATI : Indian Institute of Technology Guwahati Researchers have designed an affordable and efficient ‘passive’ radiative cooling system that does not require electricity to operate. This ‘Radiative Cooler’ coating material is an ‘electricity-free’ cooling system as it can be applied on the rooftops and functions both during day and night time to provide an alternate to the conventional air-conditioners.

Passive radiative cooling systems operate by emitting the heat absorbed from the surrounding in the form of infrared radiations that can pass through the atmosphere before getting dumped into the cold outer space.

Most passive radiative coolers operate only at night. For daytime operation, these coolers need to reflect entire solar radiation as well. Till now, these cooling systems are not able to provide sufficient cooling at daytime. IIT Guwahati Researchers set out to resolve these issues and bring out an afforfable and more efficient radiative cooling system that can operate round the clock.

Mr. Ashish Kumar Chowdhary, Research Scholar at IIT Guwahati under the supervision of Prof. Debabrata Sikdar, Assistant Professor, Department of Electronics and Electrical Engineering, IIT Guwahati, along with his research team has designed and modelled such a passive radiative cooler. Their innovation has been recently covered in the Current Science Report, which was initially published in Journal of Physics D: Applied Physics by IOP Publishing, United Kingdom.

Further, Prof. Debabrata Sikdar said, “These radiative coolers requiring no external energy sources for their operation could be one of the best alternatives to replace the conventional air conditioning systems used to cool buildings and automobiles in countries experiencing hot weather, such as India. Unlike traditional cooling technologies that dump the waste heat into the surroundings, radiative cooling is a unique process that cools an object on the earth by sending excessive heat directly into the extremely cold Universe.”

The theoretical design of the radiative cooling system are tested and verified against rigorous computer-based simulations. This patterning-free design of radiative cooler is large-area compatible and hence, also less prone to imperfections during fabrication process. Therefore, it is expected that the cooling power to be obtained after construction of the cooler is going to closely match the calculations. With this innovation, cooler manufacturers can now explore radiative cooling to make electricity-free cooling systems. The team hopes this will reach the market once the large-scale prototypes are developed and tested for oprational stability and durability under different climatic conditions. They are now working towards this.

Explaining the technology to overcome limitations of conventional radiative coolers, Mr. Ashish Kumar Chowdhary said, “For a radiative cooler to work during daytime, the material should reflect the solar and atmospheric radiations falling on it. Since the materials used in conventional coolers absorb more solar radiations and emit less during the day, those do not work during daytime. While daytime cooling can be achieved using polymer-based passive radiative coolers, oxidation degrades the polymers resulting in a limited lifespan.”

Instead of a single layer, the team cascaded silicon dioxide and aluminium nitride thin film layers on a silver layer, used as a ground metal, placed over a silicon substrate. The cooler they designed achieved about 97 per cent reflectance for solar and atmospheric radiations and 80 per cent emissivity for radiations in atmospheric transmittance wavelengths. The net cooling power is estimated to be 115 Wm−2 which could reduce ambient temperature up to 15 degrees below the outside temperature.

Ø The design is lithography-free and large-area compatible, which is vital for developing affordable and efficient large-scale radiative coolers.

Ø When compared to a recent cooler design achieving a comparable reduction in ambient temperature, this cooler is found to provide around 1.6 times more cooling power

The research team is also responsible for developing smart window materials that can automatically control a building’s climate. Recently in the 24th convocation of IIT Guwahati held on 17th June 2022, Mr. Ashish Kumar Chowdhary graduated with the best thesis award medal for his significant contribution in the field of nanophotonics and metamaterials for designing smart windows, radiative coolers, and solar absorbers. He is also a recipient of the AWSAR award 2021 from Department of Science and Technology, Government of India.