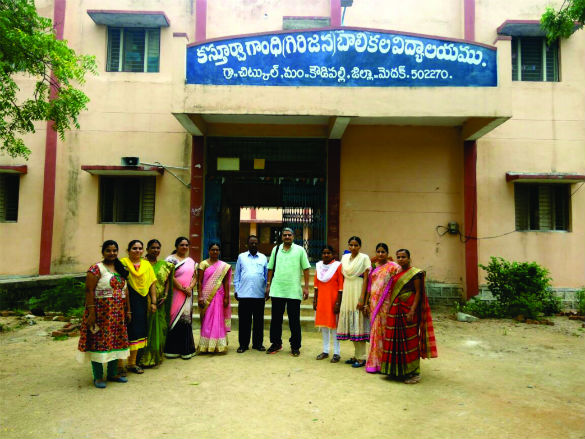 As a part of UBA, IIT Hyderabad, under the guidance of Prof. Shashidhar, Department of Civil Engineering, adopted five villages belonging to members of Scheduled Tribe Communities. The villages include Bujarampet, Ananthram, Kannaram, Salabhatpur and Mohamed Nagar of Kowidipally Mandal in Medak.
Speaking about the Swacchta Award, Prof. Shashidhar, Department of Civil Engineering, IIT Hyderabad, said “Unnat Bharat Abhiyan gives an opportunity to understand gross root level challenges for the Gram Swaraj. As a technical institute, we should work not only with mind but also with heart for the sustainable village development”

IIT Hyderabad along with Ms. Bharathi Hollikeri, Medak District Collector, conducted an extensive socio-economic survey of villages to identify the grassroot issues. Spatial and non-spatial information were mapped with the help of Differential Global Positioning System (DGPS) survey, in the Geographic information system (GIS).
During the field visits, it was noted that despite of the heavy rains during monsoon of 2016, which recharged lakes and other small water bodies in and around Kowdipally, there was negligible control over the usage and preservation of water among farmers and villagers. As a result, the groundwater in these villages became precarious by the end of February. Most borewells became dry. The repercussions were adverse and as people in these villages faced acute drinking water scarcity.

To overcome these challenges, IIT Hyderabad initiated a Hydrogeological Study to identify and demarcate groundwater bearing and recharge zones. Two-dimensional Electrical Resistivity Tomography (ERT) survey was performed at various sections in the adopted villages. Iso-resistivity contours of the study area were prepared at different depths using geo-statistical interpolation methods. A geological interpretation of resistivity distribution (both in horizontal and vertical directions) was performed to comment on groundwater potential and recharge zones of the study area.

Groundwater quality analysis was carried out for the samples collected from various bore wells of the adopted villages. It was observed that most of the groundwater samples showed Fluorides between 6-1.8 ppm which are above the permissible levels of drinking water standards. Soil samples from various agricultural fields were collected and analyzed to understand the nutrients and suggest suitable crops.

To ensure “No Open Defecation ” in the selected village clusters, IIT Hyderabad began investigating the work progress of toilet construction along with village survey and intimated the ground issues to the Administration for necessary action. Further to this, IIT Hyderabad also coordinated with District Administration in the successful implementation of 100% No Open Defecation villages and soak pits construction in the adopted village of Bujarampet. Geotagging has been completed for newly constructed toilet locations for the transparency in implementation. Solid waste dump yard, vermicomposting pits and biogas plant for the village has been completed with the motivation of UBA team. Further construction of wetland is planned for the treatment of sewage at Kannaram village where there is no scope for the excavation of pits due to hard rock.

Faculty and students extensively visited the villages in creating awareness in school children, teachers and villagers. To motivate the students towards the rural development, institute has introduced one credit UBA independent project course.

IIT Hyderabad has given its contribution in organising events like Vidyadaan throughout the year, where Tribal students visit the campus and Open day, a techno awareness camp for rural children is observed. Students of IIT Hyderabad visit government schools (Uttarpalli, ODF, Cheriyala, Kandi and Indrakaran) and share their knowledge with the students there who look up onto them for inspiration. Apart from teaching, quizzes and competitions like drawing and painting were painting were conducted, as not only academics but also extra-curricular activities are also important for their all-round development. Students spent considerable time clearing subject doubts for school children and to create interest in children towards subject matters by implementing new approaches of Digital Learning.