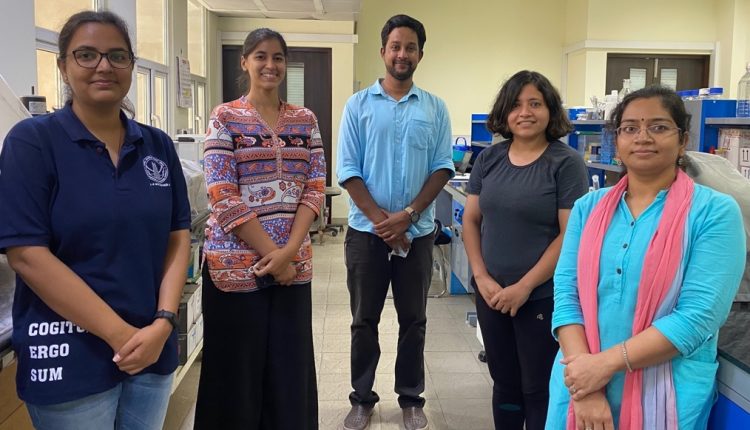 JODHPUR : Researchers from the Environmental Biotechnology Lab at Indian Institute of Technology Jodhpur led by Dr Meenu Chhabra, Associate Professor, Department of Bioscience & Bioengineering, IIT Jodhpur, have demonstrated for the first time that plant-based microbial fuel cells can generate power profitably from wastewater compared to algae-based systems. The results of their work, sponsored by the Department of Science and Technology, Govt. of India, through the INSPIRE Ph.D. fellowship scheme, has been recently published in the journal, Bioresource Technology. The paper has been co-authored by Arti Sharma, Sanjana Gajbhiye, Sweta Chauhan, and Dr Chhabra.

Wastewater treatment is an important activity in any civilized society, and the increasing generation of large amounts of domestic wastewater has necessitated development of newer treatment methods that are energy efficient and scalable. Organic waste materials have a lot of latent energy – domestic waste contains nine times more energy than the treatment consumes – there has been interest all over the world to generate energy from waste during the process of waste treatment.

“A Microbial Fuel Cell (MFC) is a device that uses microbes to convert organic matter in wastewater directly into electrical energy,” explained Dr. Chhabra. While the idea of using microbes to produce electricity was proposed as early as 1911 by Michael Potter, a professor of botany at the University of Durham, its use in fuel cells is a recent development and promises to solve two separate problems – the treatment of waste and energy generation. In MFCs, live microbes act on the waste organic matter to release the electrons that are extracted with an external load, thereby generating power.

Photosynthetic MFCs uses algae or plant to generate oxygen from waste at the cathode of the fuel cell. Algae-based systems have been extensively studied in recent years because algae grow faster and easily but are sensitive to cultivation conditions. Plant systems are slower to build and have lower efficiencies than algae-based MFCs but are more robust.

“We have experimentally compared the performance of algae and plant-based MFCs under similar operational conditions and wastewater sources,” said Dr. Chhabra. The researchers compared the two in terms of pollutant removal efficiency and efficiency of electrical energy generation. They used Canna Indica for plant-based MFC and Chlorella vulgaris for the algae-based MFC. This study was conducted under outdoor conditions using natural wastewater from the decentralized wastewater treatment plant of IIT Jodhpur.

“We found that plant MFCs are better suited because they are robust, stable, and achieve high power output,” said the lead researcher. This observation is significant because plant systems are currently underrated because of their low growth rate and large space requirements than microalgae-based systems, but it seems that the power output overrides the above problems.

“Plant-based microbial fuel cells can be easily installed in natural wetland systems for in-situ bioremediation of waste and power generation,” said Dr. Chhabra. Such fuel cells can be easily installed as artificial wetlands at any location where wastewater is collected, and the power generated can be used to power small devices such as LEDs in remote locations.

SuperQ Signs MoU With IIT-Kharagpur to Collaborate on Superconductor Research