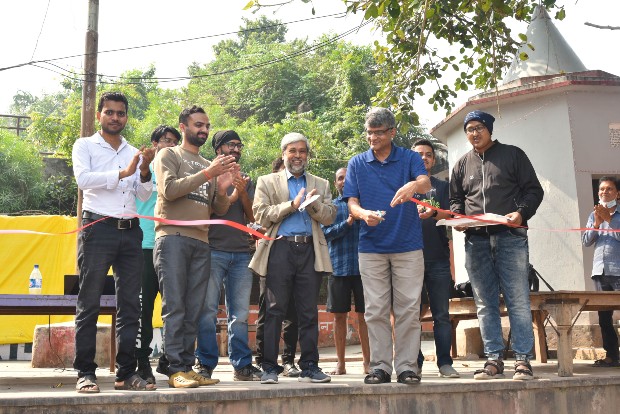 ~ The robust, modular system will help in real-time, in-situ monitoring of the river Ganga ~ ~ The system is equipped with low-cost and miniaturized in-situ water quality sensors and an auto-sampler for measuring various health parameters of the river ~ ~ The mechanism will help in cleaning and rejuvenating the holistic health of the Ganga river ~

Kanpur: As the world is witnessing a climate emergency, India has many concerns to take care of. Having a large riverine system, India accounts for untimely flood, foam-filled toxic water bodies, and unexpected rise in water level, polluted rivers and so on; impacted by global warming and human exercises. In its continuous efforts to study the impact of environmental change on riverine ecosystem, IIT Kanpur has developed an Aquatic Autonomous Observatory named Niracara Svayamsasita VedhShala (NSVS), for In situ Monitoring, Real Time Data Transmission and Web based Visualization of the river Ganga.
The NSVS system was inaugurated by Prof. A. R. Harish, the Dean Research and Development, IIT Kanpur, at the Laxman Ghat of Bithoor on the river Ganges, on 31st October. The project has been implemented by a team of earth scientists, mechanical, electrical, and aerospace engineers from Indian Institute of Technology Kanpur, led by Prof. Bishakh Bhattacharya as the Principal Investigator.
IIT Kanpur’s NSVS system is developed as a low-cost, multi-parameter, water quality monitoring platform that would consist of array of sensors and auto sampler placed on a stationary platform which is semi-submersible, all-weather, robust, and perfectly stable.
Prof. Abhay Karandikar, Director, IIT Kanpur said, “The Ganga is not just a river but a cultural heritage for us, and therefore it is our responsibility to safeguard it from any harm. IIT Kanpur has been doing rigorous research and developing various mechanisms to study the ecosystem of the Ganga and the impact of climate change on it. I congratulate the team led by Prof. Bishakh Bhattacharya on the inauguration of the NSVS system, which will ensure real-time, in-situ monitoring of the river Ganga for ensuring its good health.”
In its current capacity, the NSVS system can sense three important parameters, namely, pH, conductivity and Dissolved Oxygen capacity of water. This can be further utilized to estimate Total Dissolved Solid (TDS), specific gravity and presence of metallic ions in water. The system autonomously collect the data in every fifteen minutes and report it through wireless network to the Institute. For self-sustenance, the platform is equipped with energy harvesting systems consisting of solar cells and a unique Vortex Induced Vibration (VIV) system which can extract energy from the flow of river. The system has an open platform architecture such that other institutes developing sensors may integrate it with the IITK system in a collaborative mode.

This development is in line with the belief that in the Indian subcontinent, cleaning and rejuvenating the health of the Ganges river ecosystem is the focal point, which is often marred by some major challenges including inadequate skilled manpower, poor time-series resolution, integrated data fusion and on-demand water sampling capacity. The project has been jointly sponsored by the Department of Science & Technology, Government of India and IUSSTF – Indo-U.S. Science and Technology Forum.
Major Highlights of the project:
• A stable, buoy platform capable to provide a strong base for real-time in-situ monitoring of river water quality variables, powered by different energy harvesting systems in modular form.
• A suite of low-cost and miniaturized in situ water quality sensors and an auto-sampler for measuring parameters like dissolved oxygen (DO), pH, conductivity and total carbon dioxide (CO2) in the water.
• A newly developed in-situ sensing system called Channelized Optical System II (CHANOS II) designed by WHOI.
• The LoRaWAN protocol for enabling the communication between the sensors and the cloud. Salient aspects of the backend include ultra-low power authentication and device discovery; optimal rate of transmission for long-range upload; and ultra-low power sleep mode.
IIT Kanpur has also recently launched a ‘Ganga Atlas’ and a workflow that allows users to process and analyse declassified imagery of riverine environments at minimal cost, using open-source software. Earlier, IIT Kanpur did a research on the high resilience of dissolved heavy metals in the Ganga river; impact of immersion of dead bodies in the river and held a roundtable discussion on the rejuvenation of rivulets in the Ganga river basin; among other initiatives. In its continuous effort to tackle climate change in India, IIT Kanpur has also signed an MoU with the Delhi government to check Delhi’s air pollution.