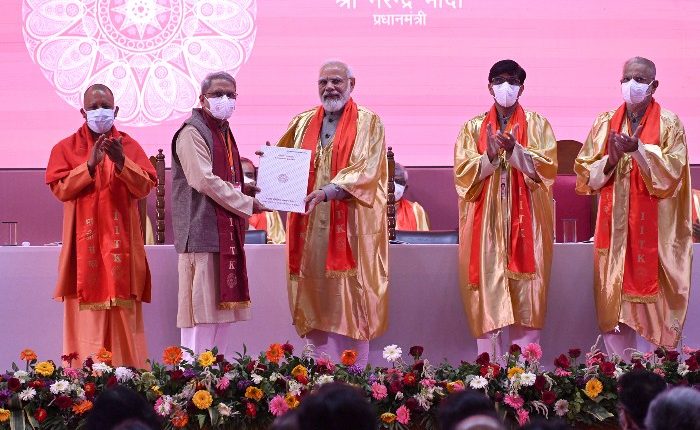 Kanpur: Indian Institute of Technology (IIT) Kanpur held its 54th Convocation on December 28, 2021 in a hybrid mode with Hon’ble Prime Minister Shri Narendra Modi as the Chief Guest. Hon’ble Chief Minister of Uttar Pradesh, Yogi Adityanath was present as the Guest of Honour.
Last year, due to the COVID-19 pandemic, the 53rd Convocation was held fully virtually for the first time in the history of IIT Kanpur. This year, the event was held in a hybrid mode. While a total of about 880 students out of the total of 1723 students receiving their degrees attended the convocation in-person on the campus, the remaining students joined the event remotely.
Gracing the occasion, Hon’ble Prime Minister Shri Narendra Modi said, “I congratulate you and specially your parents on this glorious day of your life. Once you step outside the college, a lot of people will come to you with shortcuts to success. But when asked to choose between comfort and challenge, I would advise you all to go for the latter. The one who faces challenges and overcomes them with efficient solutions is the one who scales the greatest heights. It is time for India to be self-reliant. We’ve already lost precious time over the years; we shall not waste any more time. As Swami Vivekananda said, “Every nation has a message to deliver, a mission to fulfil, a destiny to reach.”, If we’re not self-reliant, then how will our nation fulfil its goal and reach its destiny? Hence, I urge you show the same restlessness in contributing towards making India self-reliant in this technology-driven 21st century.” Also, praising the contribution of the Indian Institutes of Technology (IITs) across the country, he said that India has emerged as a mega start-up hub on a global basis and this has been achieved with the help of the students from IITs. Lauding IIT Kanpur’s contribution towards developing technology developments, he said that the students present at the event have made this possible. He lauded the recent launch of the world’s first floating CNG-filling station at Khidkiya Ghat, Varanasi, by an IIT Kanpur incubated company. He also added that IIT Kanpur’s 5G technology initiatives are now recognized globally.
Hon’ble Chief Minister of Uttar Pradesh, Yogi Adityanath said, “We all know that the technical institutions of the country play a vital role in providing quality-driven education. And especially, with the vision of Prime Minister Narendra Modi, the IITs have been given the status of institute of indigenous technology. The country has implemented the new National Education Policy 2020 to fulfil the vision of a “self-reliant India”. It is a matter of fortune that we have institutions like IIT Kanpur, IIT BHU, IIM Lucknow that show a new path to the youth of the state. The state government has contributed mutually with IIT Kanpur on several projects such as being a technical partner in the Defense Manufacturing Corridor and setting up Centre of Excellence in the field of Artificial Intelligence. Now, the state government has also given approval for an upcoming School of Medical Research and Technology (SMRT) paired with a super-speciality hospital, which would enrich the health system of the state. We have also set-up a task force among technical institutions to look after future collaborative work in various fields such as Drone Technology, Artificial Intelligence, Robotics, 3D-printing, Cyber Security, and Internet.”
Prof. Abhay Karandikar, Director, IIT Kanpur, said, “It is a very important day not only for the degree receiving students and the awardees but also for the institute as it would see another batch of change-makers go out in the world to implement their ideas and learnings for the greater good. IIT Kanpur has been contributing largely to all pillars of development of the nation, be it in the national or in the grass root level, and in that relentless journey, it is the students who have played a vital role along with the guiding faculties. This is a day to reflect back upon the values and learning we garner mutually and to celebrate the grit and integrity with which the faculties and the students practice knowledge not for the self but for the greater good of humanity. On behalf of the institute, I congratulate all the students receiving their degrees and the awardees. IIT Kanpur takes great pride in the achievements and contributions of all the students and I believe that they would continue to contribute to the nation’s growth in all spheres, with dignity.”
Dr. K. Radhakrishnan, Chairman, Board of Governors, IIT Kanpur said, “IIT Kanpur’s vision is not only to produce skilled graduates but also better human beings who would contribute to the greater good of the society and the nation at large. A convocation is a testimony of that vision where the awardees as well as degree receiving students vow to contribute their learnings for the betterment of society. I congratulate all the degree receiving students and the awardees and believe that they would work in great synergy with all the vital stakeholders of the country for ensuring holistic development.”
In the convocation, Hon’ble Prime Minister Shri Narendra Modi conferred three honorary doctorate degrees (Honoris Causa) upon three eminent personalities namely Professor Rohini Madhusudan Godbole, Professor, Indian Institute of Science Bengaluru; Shri ‘Kris’ Senapathy Gopalakrishnan, Co-founder, Infosys and Chairperson, Axilor Ventures; and Pandit Ajoy Chakrabarty, Indian Classical Vocalist, for their exemplary contributions in their respective fields. He further gave the President’s Gold Medal for ‘best academic performance’ to Mr. Abhyuday Pandey, and Ratan Swarup Memorial Prize for ‘best all-rounder’ to Mr. Yash Maheshwari. This year’s Director’s Gold Medal (4-year UG Program) for ‘outstanding all-round achievement and leadership’ was awarded to Ms. Vasundhara Rakesh, Director’s Gold Medal (5-year UG program) to Nivedita for ‘outstanding all-round achievement and leadership’, and Dr. Shankar Dayal Sharma Medal to Ms. Priyanka Bharti, who joined the event virtually.

After the formal inaugural session, Hon’ble Prime Minister Shri Narendra Modi made an impromptu visit to the lecture hall to visit the students and interact with them personally. The students were taken aback with the sudden visit and the interaction. One student exclaimed, “We were overjoyed seeing the Hon’ble Prime Minister Narendra Modi ji there suddenly. His presence and his words not only encouraged us, but also made our convocation day a memorable one for the rest of our life.”

A total of 1723 degrees comprising 183 PhD degrees; 11 MTech-PhD joint degrees; 545 postgraduate degrees (388 MTech; 50 MBA; 15 MDes; 56 MS-by Research; 36 PGPEX-VLFM); 136 Dual Degree; 157 MSc (2-Year); 27 Double Major; and 664 undergraduate degrees (560 BTech; 104 BS (4-Year)) were awarded in the convocation. In keeping with the flexibility that the IIT Kanpur academic program is known for, 233 Minors degrees were awarded in this Convocation. In addition, by spending one additional year at the Institute, 136 undergraduate students graduated with a Master’s degree along with their Bachelors while 27 of the undergraduate students graduated with a Second Major. Moreover, 80 prizes and medals were given, out of which, 21 students were awarded the Outstanding PhD Thesis Award in the second session of the convocation.

Indian Institute of Technology (IIT) Kanpur has been a premier institute for research and innovation over the years. The convocation is not just an event for awarding degrees but also a testimony of the work done in various fields of research and innovation by IIT Kanpur. In the recent years, the institute has established two new departments: Department of Sustainable Energy Engineering with the aim of becoming a vital contributor to the nation’s growing clean and renewable energy sector, and Department of Cognitive Science as a foray into an interdisciplinary study of the mind. The formation of additional two new departments, namely, Department of Space Science and Astronomy and Department of Design has been approved by the Senate recently. The institute also launched e-Masters degrees for various programs and is going to set up a first-of-its-kind School of Medical Research and Technology (SMRT) for revolutionizing medical education in India.