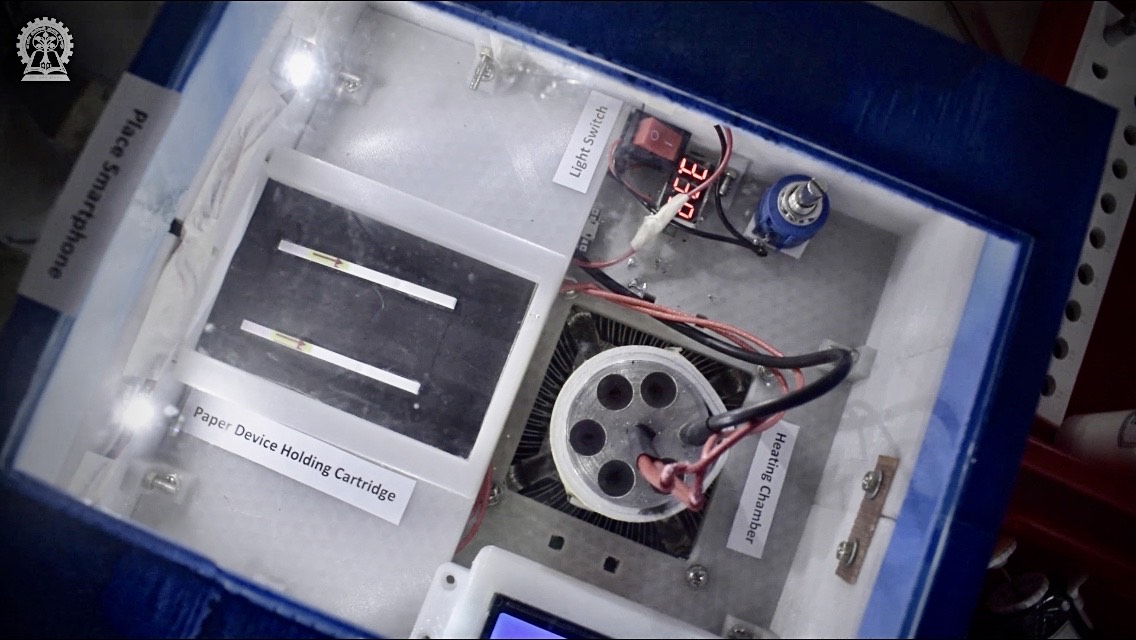 The entire rapid test can be conducted in an ultra-low-cost portable device with the test results available in a customized smartphone application for dissemination within 1 hour and requiring manual interpretation. All of this at a cost of ₹ 400/- per test.

In a unique effort, researchers at IIT Kharagpur have innovated a novel portable rapid diagnostic device to detect COVID-19 infection. This first-of-its-kind device will bring the testing for COVID-19 out from the walls of expensive laboratories and RT-PCR machines and enable testing at affordable costs for the under-served community across the world.

This entire test can be conducted in an ultra-low-cost portable enclosure as an alternative to specialized laboratory equipment. The same portable unit can be used for a large number of tests, on mere replacement of the paper cartridge after each test. The device has been proven to produce no false result with remarkable accuracy and sensitivity compatible to standard RT-PCR tests.

This test has an unprecedented low cost of less than ₹ 400/- per test, taking all components of expenses and business model into account. A video in English about the Novel Technology of IIT Kharagpur’s first-of-its-kind portable rapid diagnostic device for COVID-19 can be found by clicking on this link – https://fromsmash.com/IIT-KGP-COVID-Testing-Novel-Technology.

Considering the impending outbreak of COVID-19 infection at progressively more geographical locations with the anticipated increment in number of affected personnel at a dramatic rate, there is an emergent need to run large numbers of reliable diagnostic tests at affordable cost and minimal infrastructural support, for monitoring the early stages of progression of the disease when many of the infected persons do not exhibit discernible symptoms of infection.

However, the testing technologies currently under use are highly expensive, despite the innovations in low-cost testing kits as the actual testing machinery cost remains high. Further testing mechanism has logistical issues due to the infrastructural requirement of the testing centres. A team of researchers from IIT Kharagpur, contemplating on the challenge, realized the alternative cannot be new innovations for the existing detection systems such as testing kits and PCR machines but a disruptive approach leading to a new technology and testing process being innovated without sacrificing the scientific rigor and medically acceptable high standards of the test results.

Prof. Suman Chakraborty from the Mechanical Engineering Department, IIT Kharagpur, and Dr. Arindam Mondal from the School of Bio Science, IIT Kharagpur, came up with the concept of a portable non-invasive rapid detection test for COVID-19 thus taking the testing mechanism to a whole new level. The technology essentially deploys a disposable simple paper-strip for chemical analysis and visualization of results.

The entire test can be conducted in an ultra-low-cost portable enclosure as an alternative to specialized laboratory equipment. The same portable unit can be used for a large number of tests, on mere replacement of the paper cartridge after each test. The new device has been designed to be usable at locations with extremely poor resources in an uncontrolled environment, catering the needs of the underserved population. Moreover, it can be operated by minimally trained personnel, precluding the needs for skilled technicians.

The research team has successfully validated the detection procedure, taking time of approximately 60 minutes to run each test. This obviates the need of an expensive PCR machine, by means of a set of innovations such as a portable automated pre-programmable temperature control unit for viral testing, introduction of a special detection unit based on genomic analysis, and a customized smartphone application for dissemination of test results without requiring manual interpretation. While the Institute can produce the testing kit up to a certain scale, patent licensing will facilitate commercialization opportunities for medical technology companies.

Under the guidance of the Professors, the device design and fabrication work has been spearheaded by doctoral student Mr. Sujay Kumar Biswas, and the bio-analytical protocol has been standardized by doctoral students Mr. Saptarshi Banerjee and Ms. Nandita Kedia. Dr. Aditya Bandopahyay has further helped in developing the thermal unit.

Highlighting the need for such equipment, Prof. Suman Chakraborty, Department of Mechanical Engineering, IIT Kharagpur, said, “In assessing the utility of a specific method of disease detection, there is a common failure to recognize that the cost of the test kit may not turn out to be the most critical factor from the viewpoint of affordable diagnosis, unlike what is being commonly portrayed. Rather, the greater challenge is complete elimination of the need for any specialized infrastructure and ensuring the possibility of conducting tests at large scale at low cost without compromised accuracy. In that light, the RT-PCR based tests suffer from a compelling constraint of requiring an elaborate laboratory-infrastructure and support system including the operational and maintenance cost, to perform the test. The alternative existing approaches to these tests, on the other hand, are either invasive (blood tests) and non-indicative of early stage of development of the infection, or dependent on reagents that are extremely unstable and cannot be implemented in resource-limited settings.”

The Equipment developed by IIT Kharagpur Researchers will cost about ₹ 2,000 if a pilot facility is used. Use of a large-scale commercial facility will further reduce with increase in the production scale. This compares very favourably with the RT PCR machine costing ₹ 15 Lakh.

Further, Dr. Arindam Mondal, Assistant Professor, School of Bio Science, IIT Kharagpur, added, “The unique portable device developed by the IIT Kharagpur researchers has not only been validated for the diagnostics of COVID-19, but also been designed to be capable of detecting any other kind of RNA virus by following the same generic procedure. The impact of this, therefore, is long lasting, empowered by the capability of detecting unforeseen viral pandemics in the coming years that may potentially endanger human lives time and again.”

The project received financial support from the Institute in late April as Prof. V K Tewari, Director, IIT Kharagpur, decided to set up a fund to support COVID-19 related research and product development.

“This unique innovation is aligned with the Institutional vision to develop high-end healthcare technologies that can be afforded by the ailing common people all around the globe at virtually no cost, and is likely to make significant breakthrough in global viral pandemic management”, opined Director Prof. V K Tewari.

The Ministry of Human Resources Development, Govt. of India has also been reaching out to all technical institutions regarding ongoing research work to help address India’s increasing need to augment testing facilities.

The results from this new technology have been strictly validated by following all established laboratory controls against the benchmarked results obtained from RT-PCR machine, using synthetic viral RNA. The synthetic RNA is exactly the same replicate of the viral RNA extracted from infected patients, as per accepted scientific benchmarking procedure, and is used for validating laboratory tests to avoid undue contamination and danger due to spreading of infection while handling sensitive body-fluid samples.

IIT Kharagpur is ready for commercialization of the product. Any corporate or start-up can approach the Institute for technology licensing and commercial scale of production. The Institute is open to tie-ups, including a mode where the government intervenes with regards to meeting our low-cost healthcare objective for the under-served community as a policy measure to protect the interest of public health amidst the pandemic situation, instead of merely developing a strong profit-oriented model.

Indian Railway e-Procurement system IREPS to be integrated with GeM