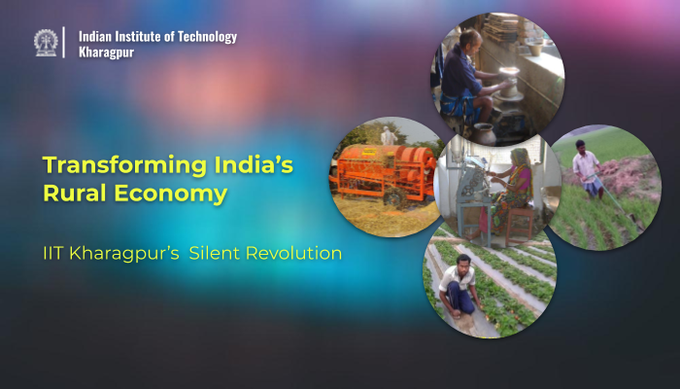 Kharagpur: COVID-19 has given a clarion call for a technology enabled world, more so in the context of the Indian rural sector which has always stayed several steps behind the urban way of living. The slow progress could be attributed to not just lack of financial resources but also towards weak communication of functional knowledge, for a large population lacking literacy (M: 80.9%, F: 64.6%), and reliance on western technologies failing to cater to the requirements of the rural population of India. Researchers at IIT Kharagpur have come forward to bridge this gap by rolling out farming technologies as well as non-farming technologies for rural employment.

Talking about this initiative, Director, IIT Kharagpur, Prof. Virendra Tewari said, “The Government of India offers huge subsidies for mechanization of the rural sector, but the farm machinery sector has not invested significantly in creating a market for indigenous technologies addressing the burning need of the Indian rural sector. Experts at IIT Kharagpur are answering this challenge by designing technologies well suited for the livelihood of the rural class of our country.”

Games24x7 ropes in Hrithik Roshan as the brand ambassador of…

Prof Kamlesh Tiwari, one of the lead researchers in this program confirmed training of around 2500 farmers from nearby villages of West Bengal and Odisha in micro-irrigation and protected cultivation structures. Several farmers who adopted these farm machineries and farm equipment reported decrease in labour cost, reduction in cost of cultivation, timeliness operations, improvement in pulverization, increase in soil fertility and production. Mr. Karthik Maity, from Hurnal village of Purba Medinipur and Subratha Mahesh from the Gurgram village of Paschim Medinipur expressed their delight over their enhanced yield due to the technologies they adopted and the increased profits.

Further, outreach programs were organized by the department of Agricultural and Food Engineering and the Rural Development Centre to communicate, train rural people and help their transition to mechanized farming and livelihoods. IIT Kharagpur has extensively mobilized the funding available under national mission projects like ‘National Initiative for Design Innovation’ and ‘Unnat Bharat Abhiyan’ towards achieving this goal. “We are ensuring the technologies are being implemented either in their farms or being adopted to generate employment through startups, setting up self-help groups. The livelihood technology adoption program witnessed significant acceptance in three North Eastern states including Assam, Manipur, Tripura as well as in several districts of West Bengal and Tamil Nadu,” Prof. Kamlesh Tiwari said.

Earlier this year, the India Brand Equity Foundation, an initiative of the Ministry of Commerce & Industry, Government of India, had estimated the gross value to be added by the rural sector, including agriculture, forestry and fishing, at ₹20 trillion approximately with a dominant employment share of 55%. Also, in May, the Finance Ministry had announced an economic stimulus of ₹1.5 trillion to boost agricultural infrastructure and logistics and ₹40,000 crore was allocated for the rural employment guarantee scheme. Referring to these Director, Prof. Virendra Tewari further emphasised on the strategic importance of such technology development. He remarked, “While India is moving at an accelerated pace towards digitization, there is a crucial need to complement it with automation in the rural livelihood and farming sector and warrant a uniform progress. Such transition in rural livelihood will not only increase productivity and earnings manifold but will also lead to capacity building for rural and cottage industries, improved product quality, increased employment, and entrepreneurship opportunities in rural areas.”

Games24x7 ropes in Hrithik Roshan as the brand ambassador of RummyCircle