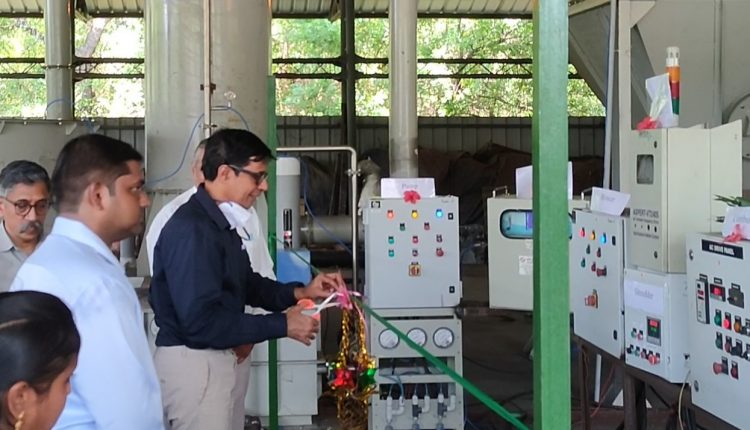 Developed completely indigenously, this facility can process up to one ton of unsegregated municipal solid waste (MSW) per day and generate steam as the main output along with clean gaseous emissions and ash as a by-product. This initiative was part of the Ucchatar Avishkaar Yojana (UAY) project funded by BHEL, Ministry of Education, Government of India. It was developed by IIT Madras Researchers at National Centre for Combustion Research and Development (NCCRD). This plant also plays a key enabling role in ‘Swachh Bharat Mission.’

This Unit was inaugurated today (27th May 2022) by Prof. V. Kamakoti, Director, IIT Madras, at BHEL Trichy. Dr. R. Vinu, Associate Professor, Department of Chemical Engineering, IIT Madras, who led the project, participated in the event along with other BHEL Officials and IIT Madras faculty. The entire process from installation to commissioning was completed within six months. This plant is set up within the Combined Cycle Demonstration Plant premises of BHEL Trichy.

Speaking during the inauguration of the plant, Prof. V. Kamakoti, Director, IIT Madras, said, “Waste Management is becoming an important issue that necessitates solutions that can scale and also help in quick and safe disposal. The first-of-its-kind Solid Waste Combustor developed by IIT Madras not only addresses the scale and safe disposal issues, but also generates heat resulting in a waste-to-wealth creation.”

After the segregation and utilization of bio-organic wastes for composting, vermicomposting and biogas generation, more than 2,500 tons/day of bio-inorganic wastes including plastics and high calorific value matter are dumped in landfills. However, the Indian solid waste management industry is worth $13.62 billion by 2025.

According to BHEL executives, who partnered for this project, Indian Municipal Solid Waste is heterogeneous and complex with high moisture (40-50%), low calorific value (≤ 2 kcal/g) and high inerts, unlike the MSW of Western origin. Existing incineration systems do not involve energy recovery and result in toxic emissions. The IITM-designed MSW incineration system addresses most of these challenges and offers users many desirable features in its design and operation. The need of the hour is both volume reduction of wastes and value generation via energy recovery from heterogeneous MSW.

Elaborating on the functioning of Solid Waste Combustor, Dr. R. Vinu, Associate Professor, Department of Chemical Engineering, IIT Madras, who led the project, said, “The initial phase of testing with a smaller scale rotary combustion unit at the National Center for Combustion Research and Development at IIT Madras with several grades of wastes gave us huge confidence in building this improved full-scale unit with efficient emission control at BHEL Trichy. The data from this unit in BHEL will help us to systematically scale-up the process in both distributed and centralized manner.”

BHEL would further carry out many tests and optimize operational philosophy for future scale-up and market this as a reliable and end-user-friendly product.

The combustor uses a sieve mesh to segregate the inert particles on-the-fly while sustaining the combustion of the heterogeneous waste. It has already been well-tested at IIT Madras for a variety of mixed wastes and up to 40 per cent moisture in the feedstock. The Pilot Plant also contains robust emission treatment units including a bag filter, wet scrubber and dry scrubber to filter and capture the pollutants ensuring emissions are well within the norms.

Cardiff University: Edible insects and plant-based proteins to be the…

University of Liverpool: Study sheds light on monkeypox in the UK